Suspension of internet services extended for another 48 hours 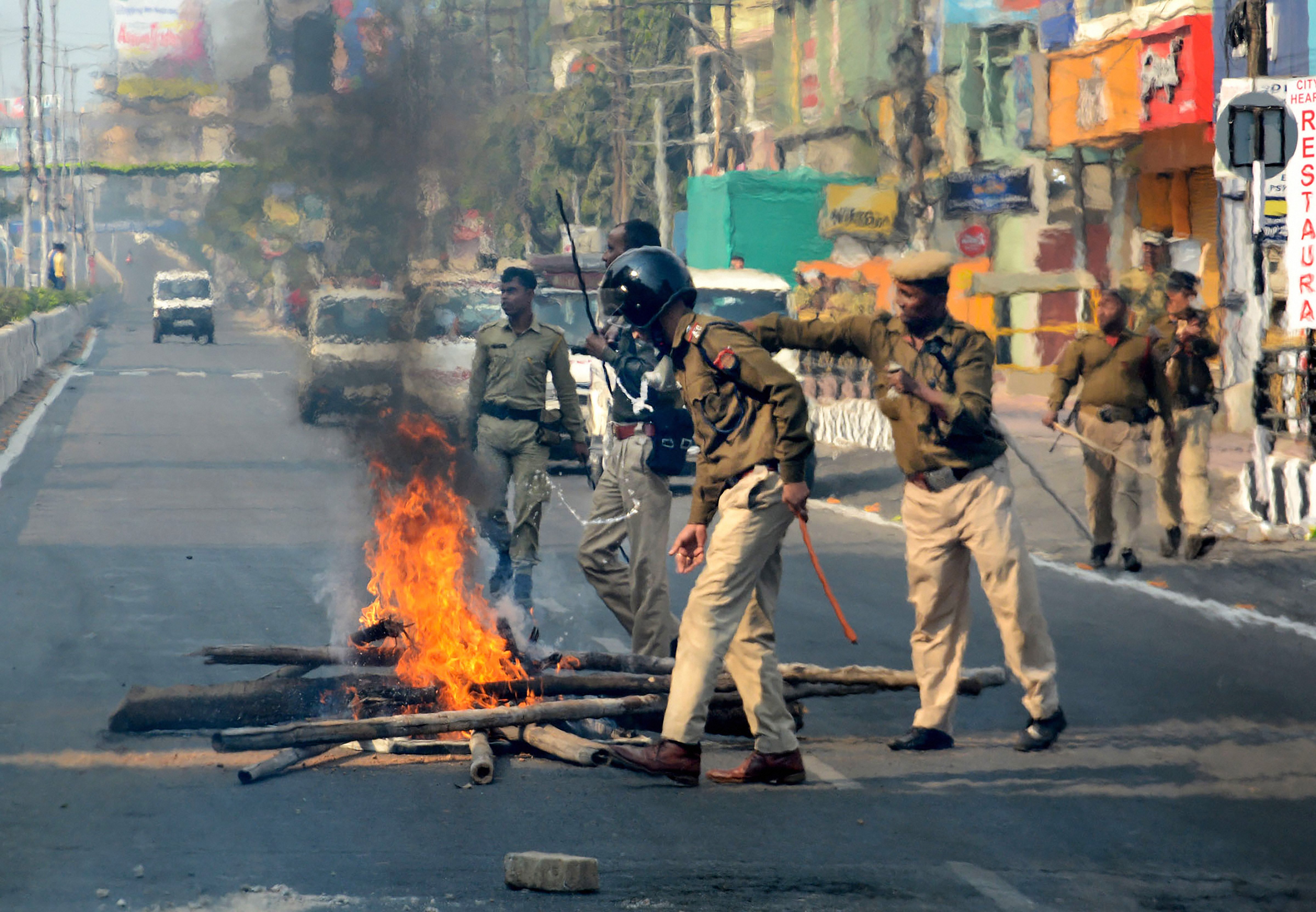 Security personnel remove burning logs that were set on fire by the protesters to block a road, during an agitation against the Citizenship (Amendment) Bill, in Guwahati, Thursday, December 12, 2019.
PTI
Our Bureau And Agencies   |   Guwahati   |   Published 12.12.19, 08:30 AM

Thousands of people on Thursday took to the streets in Guwahati in defiance of a curfew, prompting police to open fire, even as protests against the contentious Citizenship (Amendment) Bill intensified in Assam.

Police said they had to resort to firing in the Lalung Gaon area in Guwahati after protesters hurled stones at them. The agitators claimed that at least four persons were injured in the shooting.

Police also had to fire in the air in several other areas of the city, including the Guwahati-Shillong Road which turned into a war zone as protesters vandalised shops and buildings, burnt tyres and clashed with security forces.

The headquarters of the Assam Gono Parishad in the city's Ambari area was attacked by the protesters, police said.

The protesters went inside the building, located on the Gopinath Bordoloi Road in the heart of the city, and smashed a few window panes and damaged the property, they said.

Meanwhile, the government held the Guwahati police commissioner and senior officers responsible for the law and order situation and ordered them to be replaced.

Additional director general of police (law and order) Mukesh Agarwal was transferred as ADGP (CID) and GP Singh was given his charge.

ADGP (CID) L. R. Bishnoi has also been transferred as the ADGP (training and armed police), the officials said.

ADGP S. N. Singh and deputy inspector general of police Anand Prakash Tiwari have also been brought in to supervise the law and order situation in the state, they said.

A gathering was called by students' body AASU and peasants' organisation KMSS at Latashil playground in the city that saw hundreds of people in attendance.

Notwithstanding the restrictions, several prominent personalities from the film and music industry, including icon Zueen Garg, joined the gathering along with college and university students.

'Prime Minister Narendra Modi and chief minister Sarbananda Sonowal have betrayed the people of Assam by ensuring passage of the bill,' AASU adviser Samujjal Bhattacharya said at the meet.

Leaders of the AASU and the North East Students' Organization (NESO) said they will observe December 12 as 'Black Day' every year in protest against the passage of the bill in Parliament. 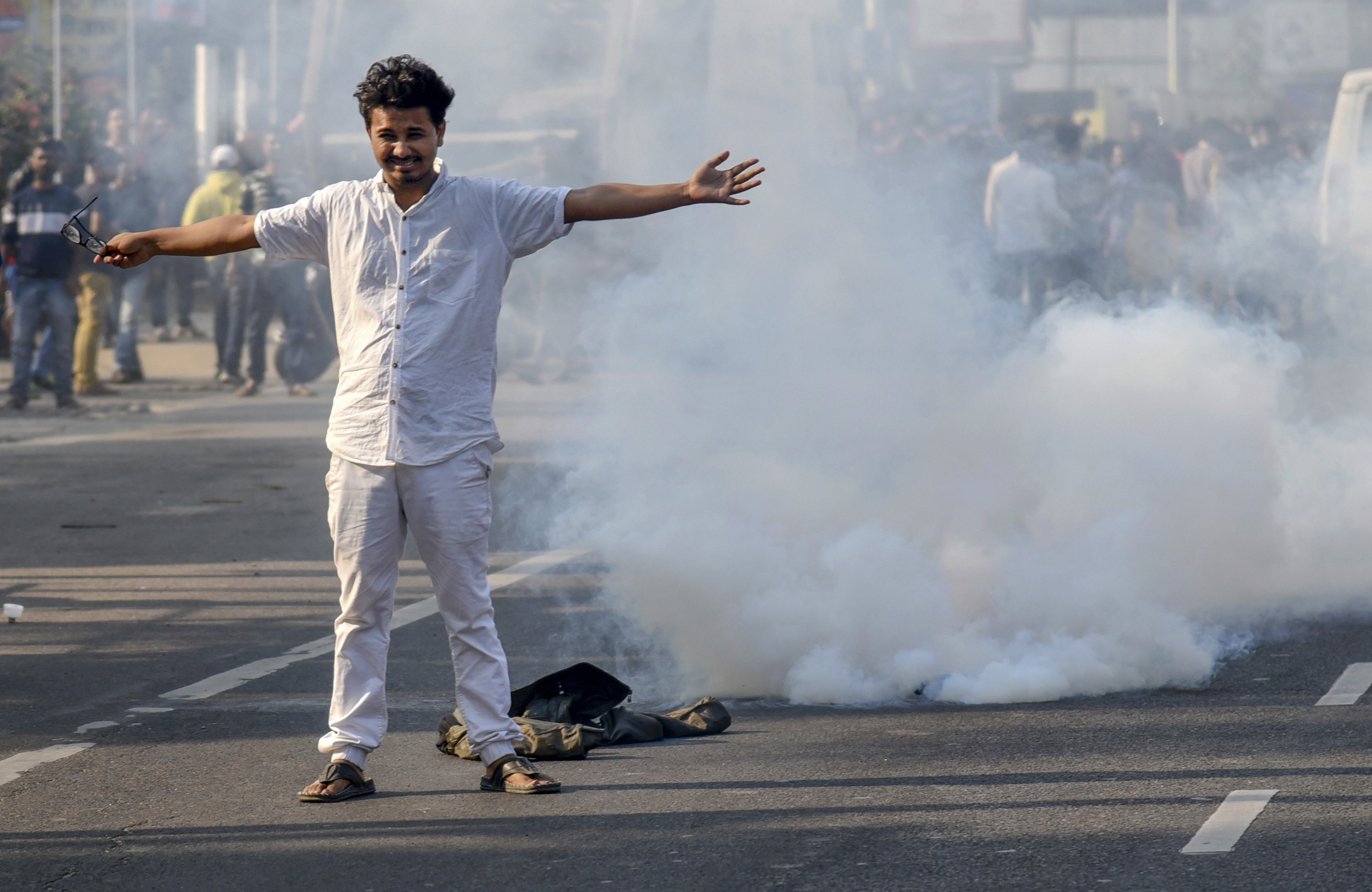 A protester stands in front of a teargas shell during a protest against the Citizenship (Amendment) Bill, in Guwahati, Wednesday, December 11, 2019.
PTI

Protests have erupted in the state for a few days. The state appeared to be on fire on Wednesday as the bill was tabled and passed in the Rajya Sabha.

Yesterday, protesters were burning tyres and effigies, shouting slogans against the government as they clashed with the police on the streets. The police replied with baton-charging and lobbing tear gases to disperse the agitating crowd.

AASU assistant general secretary Jayanta Kumar Bhattacharjya said, “The Assamese will never bow down to the communal forces who are determined to grant citizenship to illegal Hindu immigrants from Bangladesh.”

He slammed BJP and AGP leaders for betraying the people who voted them to power, believing that they would be saviours of the indigenous people.

“The people of Assam will give a befitting reply to the government in the 2021 Assembly polls and will also oust the Hagrama Mohilary-led Bodoland People’s Front in the BTC council polls,” he added.

At Bokul Tiniali on Wednesday, 10km from Dibrugarh town, about a thousand protesters assembled in the morning. As the day progressed, their numbers swelled to thousands.

Dibrugarh deputy commissioner Pallav Gopal Jha said, “The protesters turned violent, uprooted electric poles, overturned ambulances and pelted stones. The police had to take action before things went out of control. We noticed that some anti-social elements mingled with the protesters and tried to fan violence. Strict action will be taken against them. There has been an acute shortage of oxygen cylinders at Assam Medical College. Two oxygen carrying vehicles were detained by protesters at Lahowal and Demow. We appeal to the people to protest in a democratic manner and not to obstruct essential services.”

He also clarified that the army has not been called yet and no curfew has been imposed in any area of the district so far. 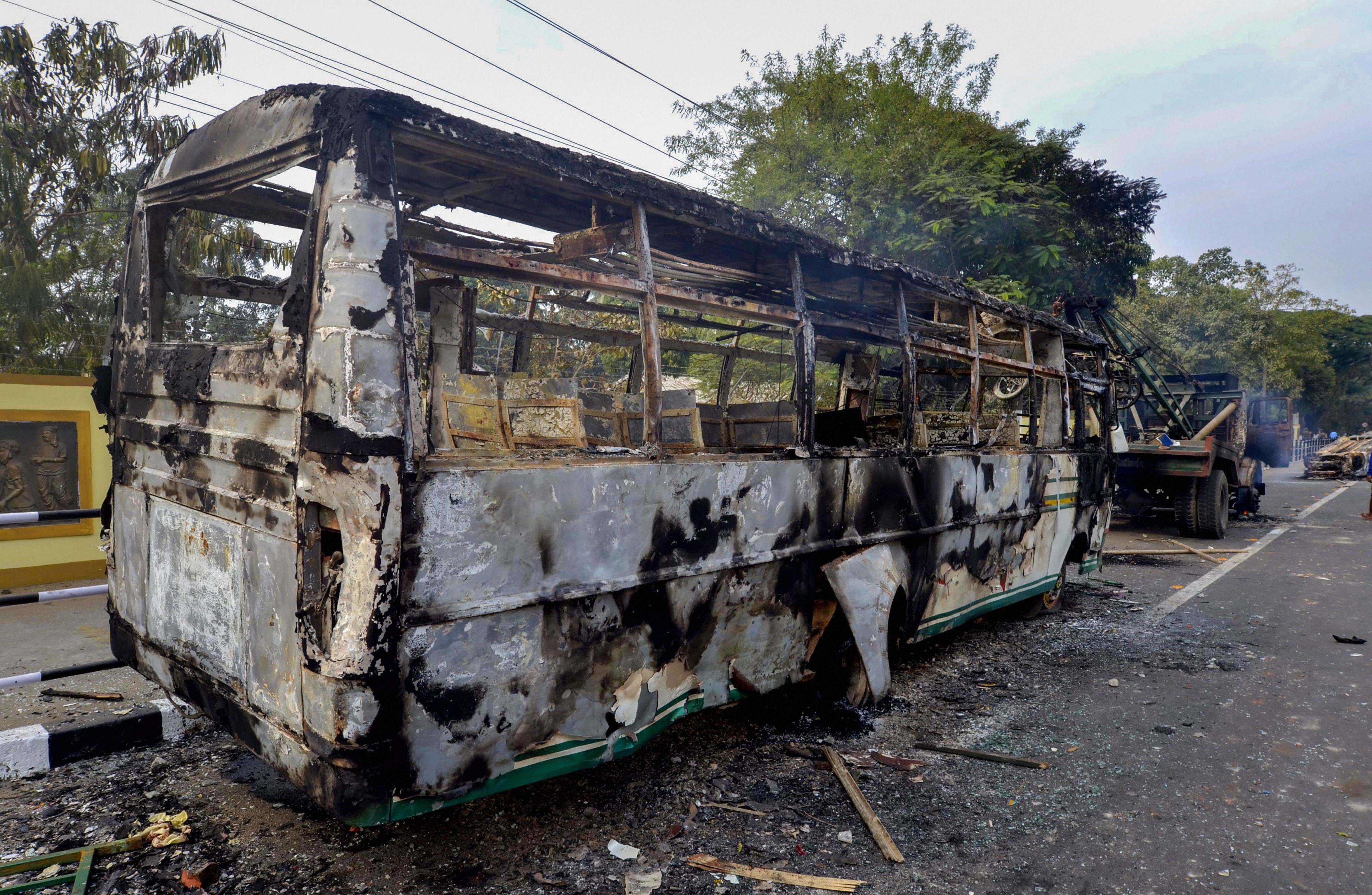 Charred vehicles, which were allegedly set on fire by the protestors, during a strike against the Citizenship (Amendment) Bill, are seen on the roadside in Guwahati, Thursday, December 12, 2019.
PTI

Kamrup district witnessed an absolute shutdown with offices, schools and colleges closed for the day. Shops were also shut, with no transport plying as all major roads, including the NH 31, being blocked.

Police said they had to fire three rounds in the air in Rangia town as protesters threw stones and burnt tyres.

Agitators were also baton-charged at several places in the town.

Police also fired in the air in Golaghat district to disperse protesters who blocked the NH 39, officials said.

Tea garden workers stopped work in Lakhimpur and Charaideo districts and also at Numaligarh in Golaghat district and some areas in Tinsukia district.

All educational institutions across the state are closed.

Several flights and trains to and from Assam have also been cancelled.

The Citizenship (Amendment) Bill seeks to provide Indian citizenship to non-Muslim refugees coming from Pakistan, Bangladesh and Afghanistan after facing religious persecution there.