Out on bail, Jignesh Mevani declares intent to fight BJP-RSS 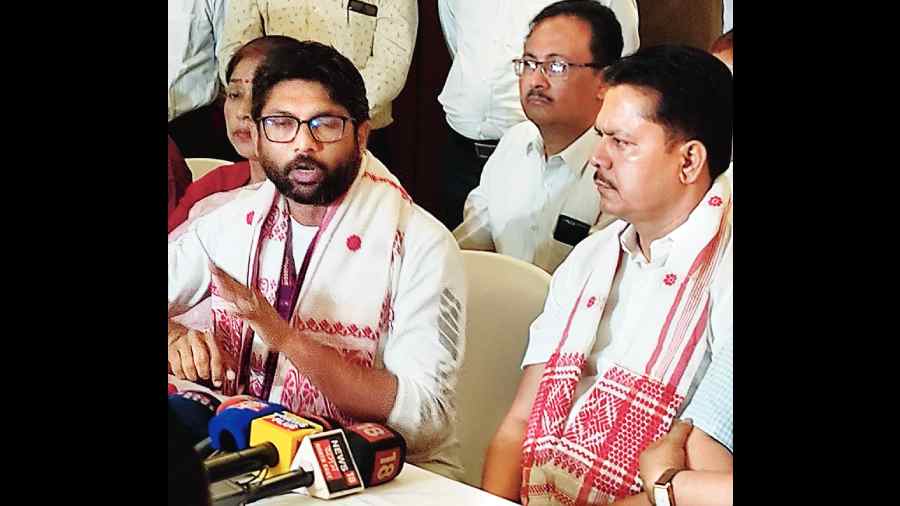 Gujarat MLA Jignesh Mevani, freed on bail by a court that pulled up Assam police for filing a “false FIR” to keep him behind bars, on Saturday declared a single-minded intent to “take on the BJP-RSS”.

“The only thing on my mind right now is how to take on the BJP-RSS from here on, keep the momentum going. I will go back to Gujarat and start a fresh agitation to free all political prisoners.… I will force the government to take back all the criminal cases filed against Dalits during the Una movement. I will travel across Gujarat,” the 41-year-old Dalit leader told The Telegraph before he was to take a flight to New Delhi from Guwahati.

Mevani spent 10 days in custody after he was arrested in Gujarat by an Assam police team on April 20 for a tweet on Prime Minister Narendra Modi that had referred to Mahatma Gandhi’s assassin Nathuram Godse.

Granted bail on April 25, he was rearrested on the charge of outraging the modesty of a policewoman. On Friday he received bail in the second case, with the court holding that the assault charge had been “manufactured” to keep Mevani “in detention for a longer period, abusing the process of the court and the law”.

Mevani, an Independent MLA backed by the Congress who is expected to play an important role in the Gujarat Assembly elections later this year, said the two cases slapped on him in BJP-ruled Assam were a “clear conspiracy to fix me, implicate me”.

“Let me explain. All of a sudden, for a tweet by a Gujarat MLA, why should Assam police file a case and arrest me? The Assam police are smart and competent and efficient enough to understand that the tweet at the most was defamatory against Modi, against one individual, nothing to do with the society at large, right? How can there be an FIR? Knowing that it does not contain ingredients for the registration of an FIR, they have done that, right? Is making an appeal to the Prime Minister to maintain peace and harmony an offence?” Mevani told this newspaper.

“Immediately after that, they filed another case which is absolutely frivolous. Not only frivolous but a clear conspiracy to fix me, implicate me in a fabricated case.… The question is, why are the Assam police doing this? What is their interest? Their only interest is that they have political instructions. Their political bosses have asked them, they have instructions from the PMO. Without instructions from the PMO, I would not have been implicated in this (tweet) case.... The fight will go on. Let them file another case.”

At an event in Guwahati on Saturday evening, Mevani described the BJP-RSS as “fascist” and said they “believe” in Godse and Hitler and have the “mindset” to suppress voices of dissent.
“The manner in which I was implicated, arrested and remanded clearly shows that Assam has become a police state,” he said. He flagged the encounter killings in the state which he said reflected “blatant disregard of the rule of law” and were a “crime against humanity”.

Forty-six people have been killed and over 110 injured in police action in the state since the BJP-led government came to power last May.

Conveying his “love and respect” for the people, culture, history and diversity of Assam, Mevani said he “salutes” the land of Srimanta Sankardeva, the revered 15th-century Vaishnavite saint-scholar-reformer.

“Let Assam remain the Assam of Sankardeva, don’t make it the RSS’s Assam,” he urged the people of the state.

After receiving bail on Friday, the MLA had spent the night at the home of the Barpeta district Congress president under police protection. On Saturday morning, he completed the bail formalities and left for Guwahati from Kokrajhar.

Jignesh back in Gujarat