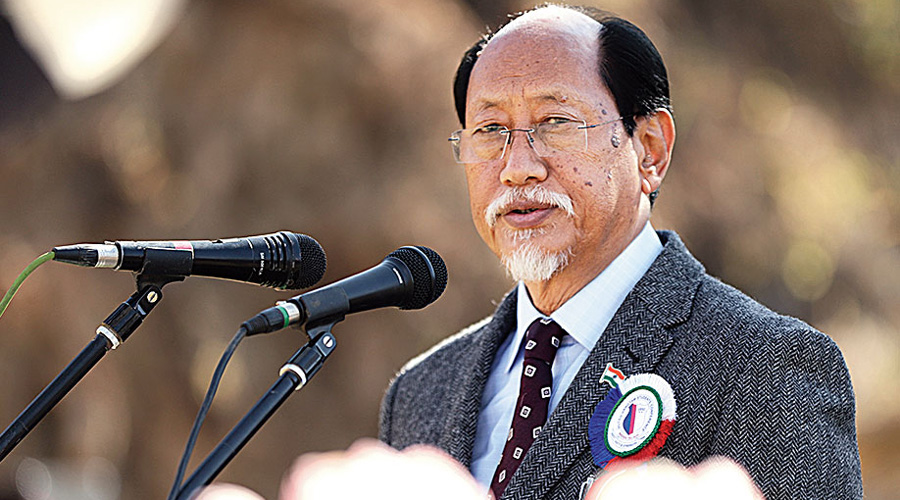 The Nagaland Assembly on Thursday adopted a four-point resolution urging the Centre and the Naga political groups to conclude the ongoing peace process for an honourable and inclusive solution without further delay.

Chief minister Neiphiu Rio moved the resolutions drafted by a seven-member committee constituted on Tuesday for consideration and adoption in the House.

One of the resolutions urged the stakeholders involved in the peace process to sit across the table for the conclusion of the negotiation that is “honourable, inclusive and acceptable to people as One Solution without any further delay”.

The ongoing peace process started in 1997 and a framework agreement was signed in 2015. However, talks have stalled with the NSCN (I-M) sticking to its demand for a separate flag and constitution.

During the special discussion on the Naga political issue on Tuesday, Rio had not only hailed that deliberations as “highly” fruitful but also delved into a brief history about the political movement dating back to 1918 when the first political organisation of the Nagas took birth in the form of the “Naga Club”.

He had also explained in detail the numerous landmark events that took place over the span of a century, events that had defined the course of the long-standing political issue.

The first of the four-point resolution adopted on Thursday “endorsed” and reiterated all past resolutions of the Assembly on the political issue while resolving to work “unitedly” in facilitating the political negotiations.

The 60-member House further appreciated the efforts of the Centre to resolve the issue through peaceful means, for “acknowledging” the “unique” history and identity of the Nagas by upholding the political talks.

The Assembly also hailed the efforts of Naga political groups, political parties, civil society organisations, the Church and NGOs towards finding a peaceful resolution and urging them to continue working towards strengthening Naga unity and come together for the larger interest of the Naga people.

The resolution passed in 2018 called for integration of the contiguous Naga-inhabited areas, appealing to all sections of Nagas to sustain and participate in the negotiations for an inclusive solution.

In 2015, the Assembly had adopted a five-point resolution on the issue, reiterating the resolutions adopted in the past which called for integration of Naga-inhabited areas, withdrawal of Armed Forces (Special Powers) Act from the state and an appeal to all sections of Nagas to work unitedly for an early solution.

Naga-inhabited areas fall in neighbouring Assam, Manipur, Arunachal Pradesh and some portions in Myanmar. All the neighbouring states have objected to any move that could affect their territorial integrity.

Assembly Speaker S. Longkumer had on Tuesday constituted a seven-member committee to draft a resolution on the Naga political issue after a special discussion in the House.

The members met on Wednesday afternoon to finalise the draft of the resolution.

“Three-fourths of the Assembly time was devoted to discussing the Naga political issue. All members were unanimous on how to take the long-drawn peace process forward,” Sazo had told The Telegraph on Tuesday.

Rio had said on Tuesday that “it was time to rise above our differences and come together for the greater cause of our land and our children” and urged all sections of the society to continue to strive towards true and genuine unity.

Opposition leader T.R. Zeliang of the NPF had said the Naga political issue “is not about who is right but what is right for the Nagas”. He had said that for decades they have struggled to find an amicable and early solution which is the desire and aspiration of “all Nagas spread across four Indian states and two nations”.