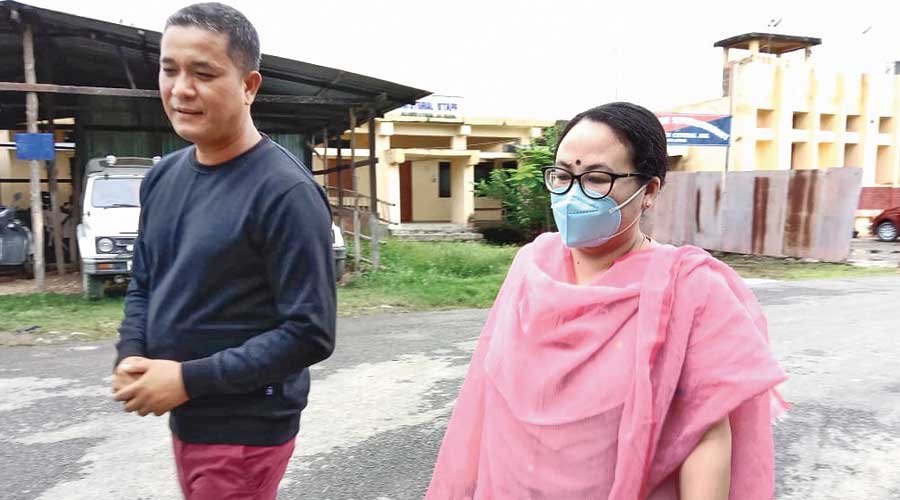 Kishorchandra Wangkhem with his wife Ranjita after his release on Friday
Telegraph picture
Umanand Jaiswal   |   Guwahati   |   Published 24.07.21, 01:22 AM

Manipur High Court on Friday ordered the release of a journalist detained under the National Security Act since May 17 for a Facebook post criticising the promotion of cow dung and urine as cure for Covid-19.

The high court agreed with the contention of journalist Kishorchandra Wangkhem’s wife that his case was the same as that of Erendro Leichombam, the political activist who was freed by the Supreme Court on Monday on the ground of protection of personal liberty after he had spent 67 days in custody over a similar Facebook post.

Kishorchandra, associate editor of the news portal The Frontier Manipur, walked out of Sajiwa jail around 4.10pm. He told The

Telegraph minutes later that he would continue to work for the “betterment of society” by creating awareness among the public against laws such as that on sedition and the NSA.

A BJP-led coalition government is in power in Manipur.

The committee of judges of the high court “dealing with public interest litigation, letter petitions and habeas corpus matters” directed the registration of Ranjita’s letter petition as a writ petition. It was listed for hearing on Friday.

Ordering Kishorchandra’s release, the division bench said: “On the face of it, we find no distinction or difference between the case of the petitioner’s husband and that of Erendro Leichombam. Both of them put up similar Facebook posts, critical of the utility of cow dung and cow urine in treating the coronavirus.”

The court added: “As they stand identically situated, we are of the opinion that the continued incarceration of the petitioner’s husband would be as much a violation of Article 21 (right to life and personal liberty) of the Constitution as it was in the case of Erendro Leichombam.”

The bench cited Monday’s Supreme Court order for the immediate release of Erendro on the ground that his “continued detention would amount to violation of his right to life and personal liberty under Article 21 of the Constitution”.

While suspending the May 17 state government order detaining Kishorchandra under Section 3(2) of the NSA till the next date of hearing (August 24), the high court, in an interim direction, also asked the BJP administration to ensure “the petitioner’s husband presently detained in the Central Jail, Sajiwa, is released forthwith and in any event, not later than 5pm today, upon his furnishing a personal release bond for a sum of Rs 1,000, if his further incarceration is not required in connection with any other case”.

Both Kishorchandra and Erendro were arrested on May 13 on the basis of separate FIRs filed by senior state BJP leaders P. Premananda Meitei and vice-president Usham Deben for Facebook posts written soon after the death of Manipur BJP president Saikhom Tikendra Singh from Covid that day. They were detained under the NSA “within minutes” of getting bail.

Ranjita’s plea to the chief justice said her husband’s Facebook post “was a very sincere expression for not agreeing with the unscientific treatment of the said present corona pandemic where even the scientific tests are being done on an experimental basis” and was “not aimed to hurt the feeling of anyone or any group”.

Kishorchandra, 41, told this newspaper he was feeling both happy and sad. “I’m happy because I’m out of jail and sad because bahut galat ho raha hai (a lot of wrong is being committed).… People are being jailed for speaking up. This is not done.”

This was the second time Kishorchandra had been detained under the NSA. He had been held earlier from “November 27, 2018, to April 3, 2019, for a Facebook post critical of the BJP’s policies”, he said.

On what he plans to do, Kishorchandra said: “I will continue to raise my voice against injustice. Something should be done so politicians understand that what they are doing is not good. The executive should also understand what is good and what is bad for society. I have filed a petition against the sedition law in the Supreme Court (on April 30). I am also planning to challenge the NSA in the apex court.”