The govt hopes it will not only boost tourism but also cut travel time between the city and North Guwahati to just about 7.2 minutes, from about 30 minutes by ferry and nearly 75 minutes by road 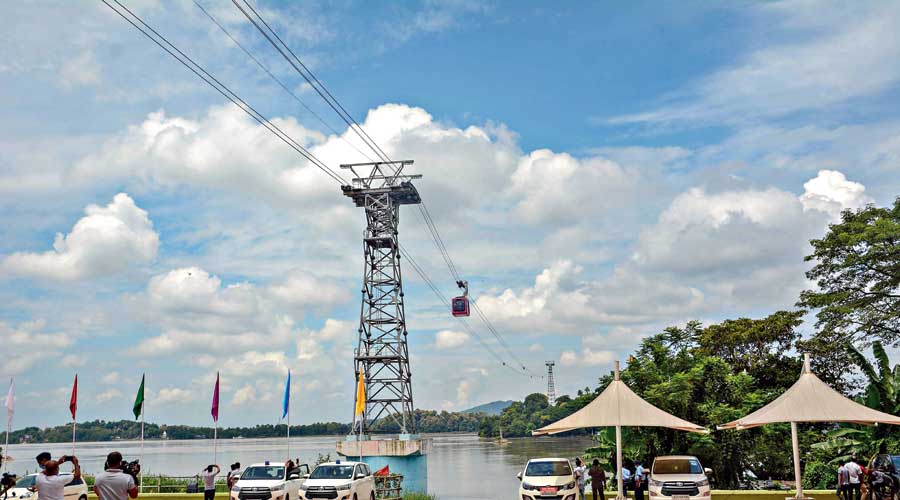 The 1.8km Guwahati-North Guwahati ropeway across the Brahmaputra, India’s longest river ropeway, was commissioned on Monday, a development the BJP-led state government claimed was “another feather in the cap of the nation’s gateway into the Northeast”.

The government hopes the river ropeway will not only boost tourism but also cut travel time between Guwahati and North Guwahati to just about 7.2 minutes, from about 30 minutes by ferry and nearly 75 minutes by road.

Cabinet minister Himanta Biswa Sarma, during whose tenure as Guwahati Development Department (GDD) minister the project was initiated, and GDD minister Siddhartha Bhattacharya inaugurated the ropeway, which will operate from Kachari Ghat in Panbazar to the Dol Govinda temple in North Guwahati. 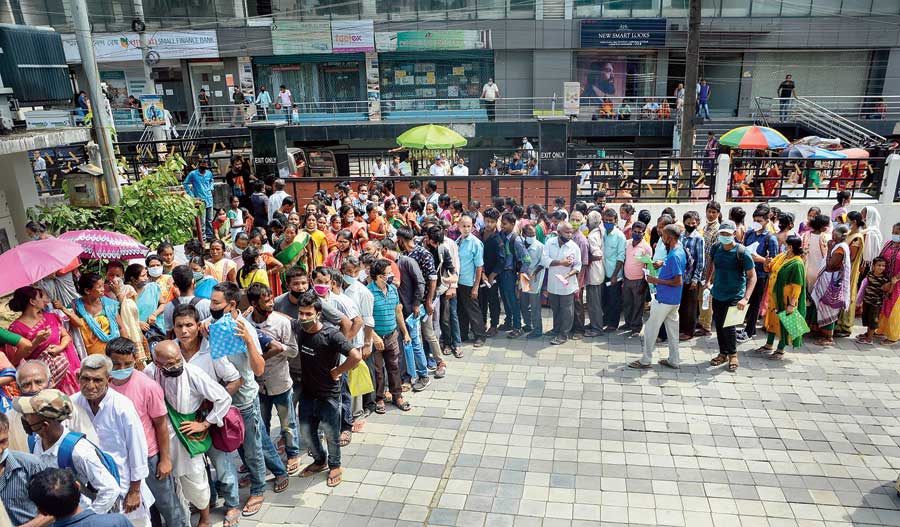 Social distancing norms being flouted in a queue for Aadhaar card registration in Guwahati on Monday.
PTI

Apart from the longest river ropeway, Assam also boasts of the longest bridge in the country, the 9.1km Bhupen Hazarika Setu, also known as Dhola-Sadiya bridge, in Tinsukia district.

Inaugurated by Prime Minister Narendra Modi on May 26, 2017, the Dhola-Sadiya bridge has not only cut travel time between Assam and Arunachal Pradesh by five hours, but has been a huge boost to tourism and trade.

The much-delayed river ropeway, built at a cost of over Rs 56 crore, was initiated in 2006 and was ready for commissioning in 2019 but was held up by the anti-CAA protests and then the Covid-19 pandemic.

An official statement said that “India’s longest ropeway over a river will connect Guwahati to North Guwahati and is another feather in the cap of the nation’s gateway into the Northeast” and that tourism in Assam and its capital will get a “major boost” through the ropeway project.

“ Overlooking the beautiful Brahmaputra river, the 1.8km ropeway will facilitate passengers to cross the river, reducing the travel time by an impressive difference. Keep your eyes wide open and look out for Urvashi island and catch a glimpse of the Umananda Temple on Peacock island, built by Ahom King Gadadhar Singha, who was said to be a devotee of Lord Shiva,” the statement said.

The ropeway will have two cabins and each cabin will have the capacity to ferry 32 passengers, including the operators. It can ferry 250 persons an hour, with one-way fare fixed at Rs 60 and two-way at Rs 100. However, only 15 passengers can avail of the ride one way because of the pandemic-triggered social distancing norms.

The bi-cable jig-back ropeway has been constructed by Samir Damodar Ropeways Pvt. Ltd — a joint venture company between Damodar Ropeways and G.L. Construction, under the supervision of Guwahati Metropolitan Development Authority.

At 4km, the Auli ropeway in Uttarakhand is the longest ropeway connecting the hill stations of Joshimath and Auli. “ But this is the longest on a river,” a GMDA official said.

Though the project cost was Rs 28.17 crore when it was approved on March 1, 2006, it suffered a huge cost escalation because work started only in 2009 with a 24-month completion deadline and then work was halted after the foundation of a post, which would hold the cable, tilted in the floods in 2010. However, work gathered steam from 2017.

RITES Ltd is the project consultant. Gangloff Cabin, Switzerland is the cabin designer and supplier while the carriage and rescue system is by Garaventa AG, Switzerland, which also issued the safety certificate.

The inaugural day saw at “least nine rides” for the guests, invitees, mediapersons and locals one of whom said that it was a great experience and hoped it will be professionally maintained, including the pricing and safety aspects. Safety is something which has to be ensured round-the-clock. All movements will be monitored on CCTVs, sources said.