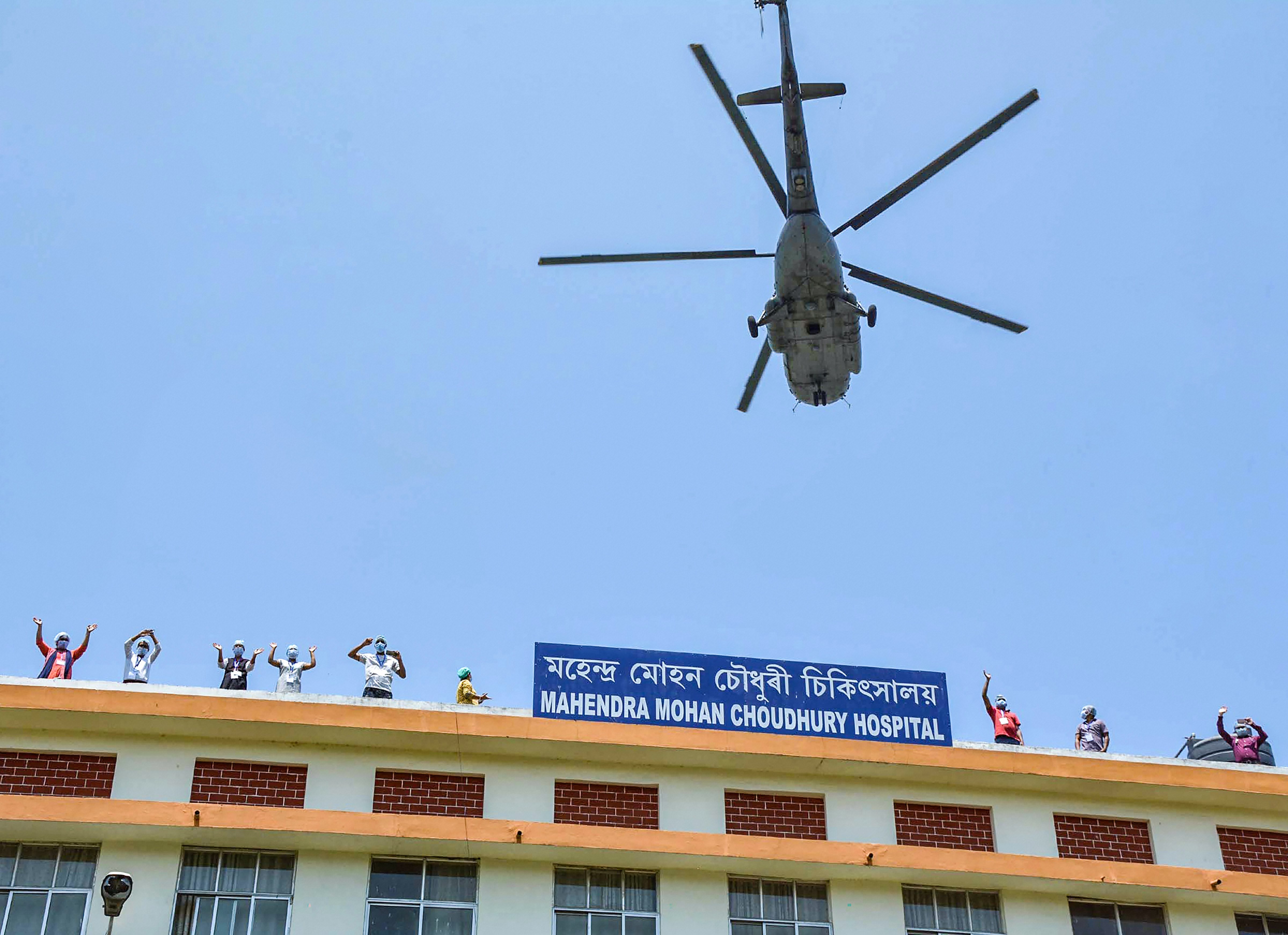 Medics wave as an Indian Air Force (IAF) helicopter showers flower petals to express gratitude towards the frontline workers for their contribution in Indias fight against COVID-19 in Guwahati on Sunday, May 3, 2020.
(PTI)
Bhadra Gogoi   |   Dimapur   |   Published 03.05.20, 11:16 PM

Nagaland is perhaps the first state in the country to have received Covid-19 consignments through airlift by Indian Air Force planes in support of the state government.

The third and final consignment to set up the two BSL labs by C-130 Super Hercules from Mumbai is expected to arrive here on Monday.

Once this consignment reaches the state, one of the two BSL labs in the state may be made operational soon.

The officials of different line departments are collectively working with the state government to enhance disaster-mitigation measures in the state.

An IAF helicopter on Sunday conducted a fly-past and showered flower petals over Covid-19 hospitals here in respect of and to show solidarity with medical professionals and other frontline workers engaged in the fight against the corona virus.

Church message: Church leaders of Dimapur, under the initiative of deputy commissioner Anoop Kinchi, has been spreading the message of love and peace in various locations in the district for the third consecutive Sunday through a public announcement system.

The group has covered almost whole of Dimapur town during the two previous Sundays.

This Sunday, the church leaders visited the police stations, hospitals and jails to pray, encourage and thank the frontline workers.

The announcement in the town, which started on April 4, to sensitise and disseminate important information on Covid-19 to the public of Dimapur is continuing till date.

NPP: The Nagaland unit of National People’s Party on Sunday said levying of an “inhuman” and “illogical” Covid-19 cess on the prices of fuel in the state will double the burden of the common people.

The government levied the Covid cess on diesel by Rs 5 and petrol by Rs 6 from the midnight of April 28.

Party president Andrew Ahoto Sema and general secretary Limanuksung Longkumer, in a release, questioned the state government why such huge amount of cess has been levied on fuel all of a sudden, especially at a time when fuel prices have decreased considerably in the international market.

“Such an arbitrary taxation is nothing short of a daylight robbery of the common people,” the party said.

It demanded a “satisfactory reply” from the state government on the matter.

The party said the prices of commodities are already at an all-time high due to illegal hoarding of goods by the shopkeepers and the additional cess will give them another opportunity to raise the prices.

“This is happening right under the nose of the authorities which are not even monitoring the price rise,” it said.