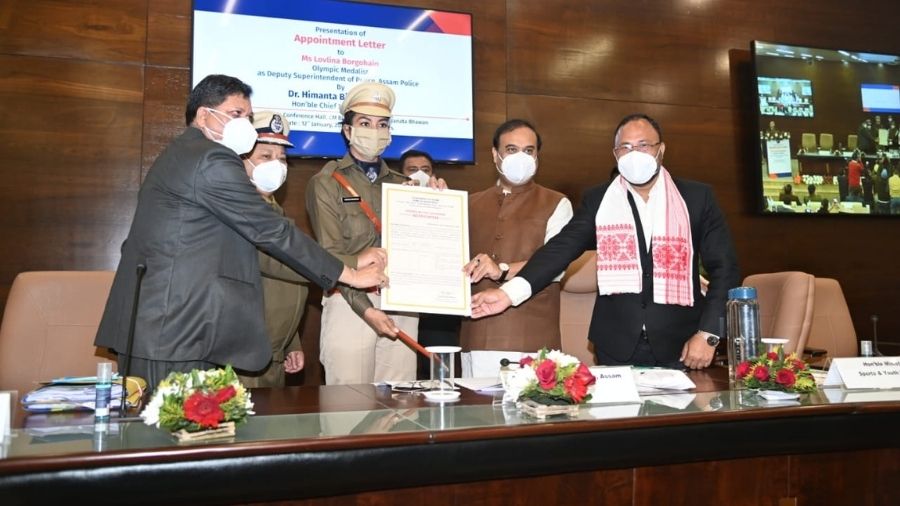 Olympic bronze medallist Lovlina Borgohain was on Wednesday enlisted as a trainee deputy superintendent (DySP) in the Assam Police with Chief Minister Himanta Biswa Sarma, who joined the pipping ceremony, exuding confidence that she will get inducted into the Indian Police Service (IPS) cadre in due course.

An emotional Borgohain thanked the police department and affirmed that she will put in her best efforts to bring more glory to the state.

Speaking at the programme, Sarma said Borgohain winning bronze in boxing at last year's Tokyo Olympics was perhaps one of the most glorious moments of the state's sporting history.

Given the pugilist's age, she should be able to secure a top position within Assam Police Service (APS) some day and subsequently make it to IPS cadre, Sarma maintained.

"We recommend the brightest APS officers for the IPS cadre. She will automatically qualify for it, provided she completes her graduation in the meantime," Sarma stated.

The chief minister exhorted the 24-year-old to set a shining example of equal dedication to her other responsibilities as well.

Besides her monthly salary, Lovlina will be given additional Rs 1 lakh per month for her training expenses, he said.

If it gets difficult for her to continue training at Patiala in Punjab, the state government might think of bringing an international-level coach for her to Guwahati, he promised.

"We will also soon name a road in Guwahati after Lovlina," Sarma said.

Referring to enlistment of other sportspersons in the Assam Police since last year, in line with the state's new policy, Sarma said sports should not be viewed as a co-curricular activity anymore.

"Earlier, parents used to dissuade their children from pursuing sports after a certain age as there was no guarantee of a successful career even if someone excelled in a discipline. We want to change that. We want to prove that sports itself can be a career," he asserted.

Besides putting a thrust on recruitment of sportspersons in the Assam Police, the government is also working on increasing sports quota in other departments, Sarma pointed out.

He said that priority was being given to construction of sport complexes in different parts of the state, including a Rs 25-crore stadium named after Lovlina in Sarupathar assembly constituency.

Sarma, who launched a crusade against the drug menace after assuming office in May last year, noted that sports can work as an alternative to engage youths and dissuade them from substance abuse.

The CM said every police station has been asked to form own football and volleyball teams, which can then participate in district-level competitions.

He urged upon the district administrations to ensure timely organisation of school-level sports competitions once the pandemic situation eases.

Borgohain, in her brief speech on the occasion, said, "This is a memorable day for me as I am joining the Assam Police."

"I will give my best in the boxing ring and bring more glory to my state and people," the Khel Ratna awardee added as her eyes welled up with tears.

The pugilist scripted history last year by becoming the first sportsperson from Assam to win an Olympic medal. She clinched the bronze in the welter-weight category in last year's Tokyo Games.