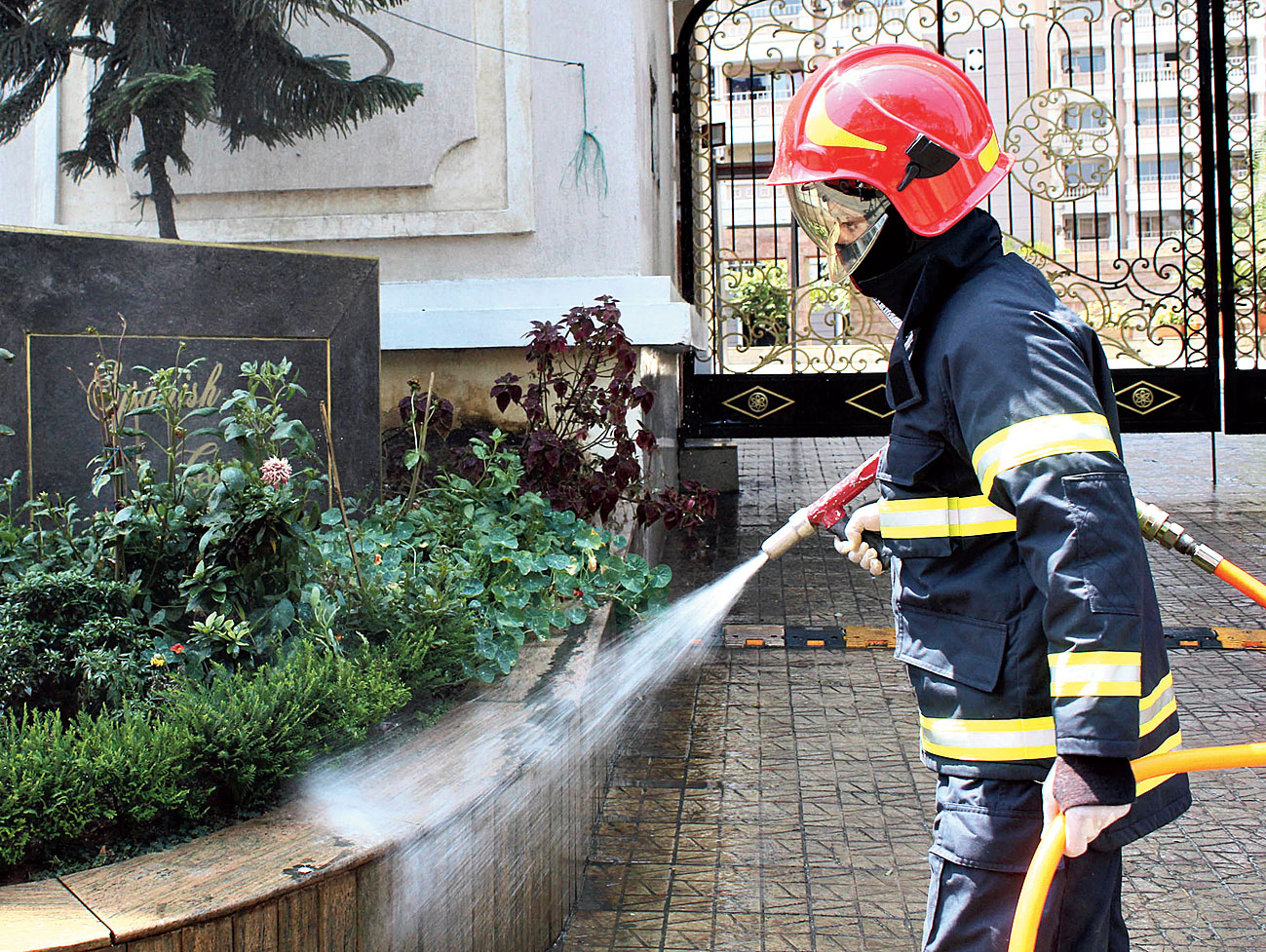 A fire and emergency services worker sprays disinfectant at the entrance of the apartment in Guwahati.
Picture by UB Photos
A Staff Reporter   |   Guwahati   |   Published 04.04.20, 07:49 PM

Assam health minister Himanta Biswa Sarma on Saturday said those who had attended the religious congregation at Nizamuddin in New Delhi last month and were still avoiding testing for Covid-19 are “human bombs”.

Asking all of them to come forward and identify themselves to strengthen the state’s fight against novel coronavirus, the minister sought cooperation from leaders of Muslim groups.

Out of the 25 people who have tested positive for the virus so far in Assam, 24 had a link to the Nizamuddin event — either they attended it or are relatives of the attendees.

The state government has found itself in a very tricky situation as the number of people from the state who had attended the congregation has been swelling. Moreover, none of the attendees had identified themselves voluntarily. They were either traced through information by local sources or family members.

“Though the initial idea was that around 500 people from Assam had gone to Nizamuddin, with every passing minute, we are getting more and more inputs. Now we have found that some 800 people of the state had gone there,” Sarma said.

So far, blood samples of 812 people connected to the Nizamuddin event have been tested, of whom 636 have tested negative. Results of another 152 people are awaited.

“It’s very upsetting that people are not cooperating. Those who have been avoiding the tests and not disclosing their identity are virtual ‘human bombs’ carrying a threat not only to themselves but to many. The state government has directed all district administrations and the police to take up the matter with local leaders of Islamic groups and others to identify them. We want the leaders to cooperate and provide us with complete data of those who had attended the congregation,” Sarm said.

Citing the example of the positive Covid-19 case in Guwahati, where the infected person was found to have a contact chain of 111 people, Sarma said, “If for one person, the department has to conduct check-ups of 111 people, just imagine the number of people who are not receiving timely treatment owing to the action of the people who have gone underground. It’s very crucial.”

Sarma reassured that all those in quarantine centres are receiving the utmost care and treatment.

The minister said if the Delhi attendees do not come forward voluntarily by Sunday, they will face police or legal action. “If the health department fails to convince them, then other departments will take charge,” he added.

The Azan Fakir (Pir) Foundation Trust has appealed to masjid committees, village panchayat heads, village development committee heads and conscious citizens of minority-dominated villages to take the initiative to trace those who have gone into hiding after returning from the congregation and people who have come in contact with them and hand them over to the health authorities.

The trust also advised the people to take help of the police if needed. The appeal, sent to mosques and religious places, concludes with the line that “to keep religion alive, people will have to live”.