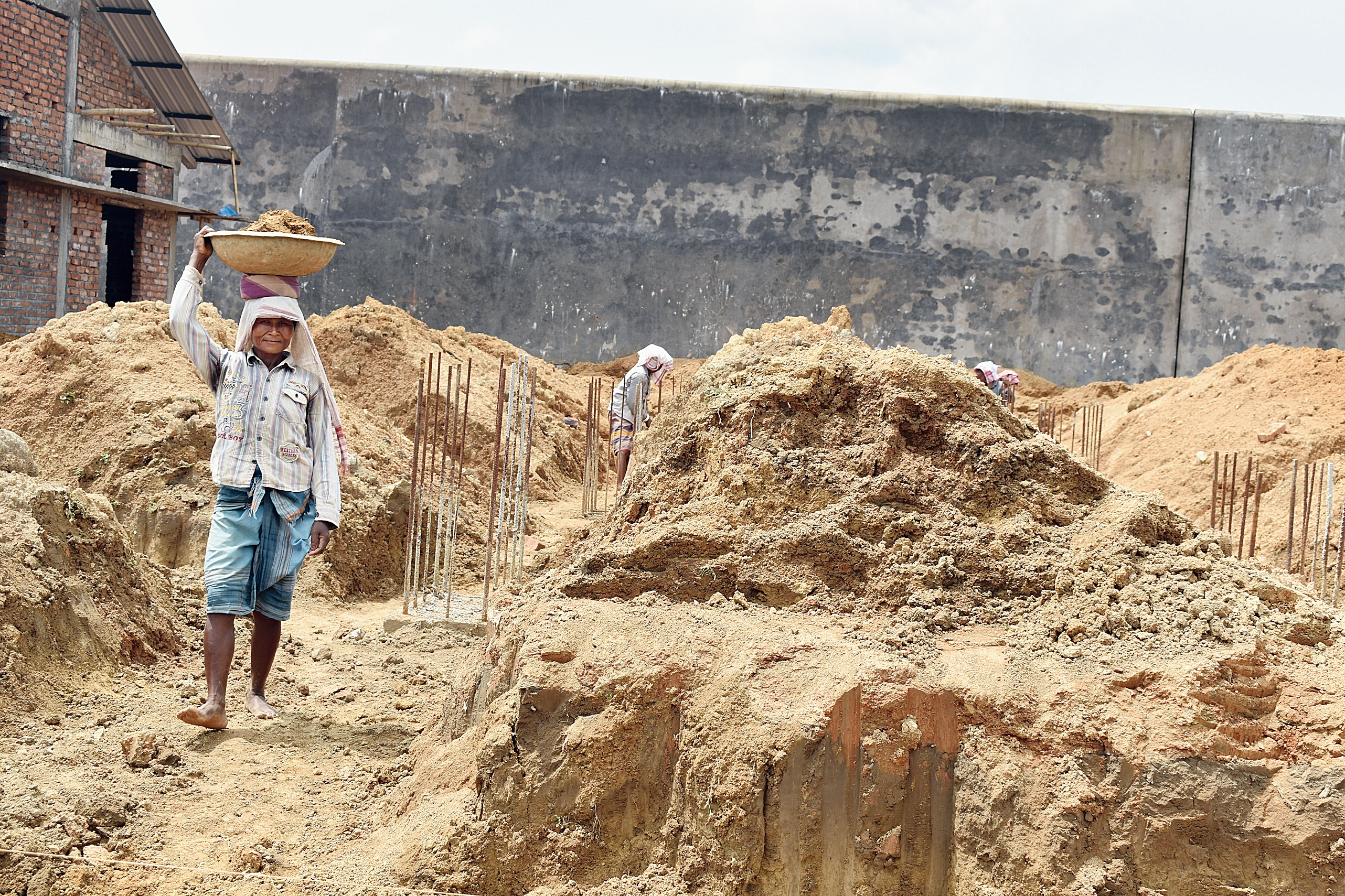 Work at the country's first standalone foreigner detention centre, a massive infrastructure with a capacity to house 3000 inmates coming up at Matia in Goalpara district in lower Assam, is progressing at breakneck speed to meet its December deadline.

There are six detention camps in Assam housed in existing jail premises but this is the only standalone facility in the state and the largest in the country.

“We have working almost 11 hours a day. We start at 7am and continue till about 6pm so that we can meet the deadline. There are more than 300 of us working on the project,” said one of the labourers, Sopial Hoque, 33.

The 19.06 lakh people left out of the final NRC have been given 120 days to approach the foreigners tribunals to prove their citizenship. If declared foreigners, they will be kept at these detention centres, including the one coming up here.

The detention camp site is spread across 10 acres and surrounded by rubber plantations. There are several brick kilns in neighbourhood where the local people earn their livelihood. The facility, being built at an estimate of nearly Rs 46 crore, started early this year and is expected to be functional in first quarter of 2020.

“At least 300 workers are engaged in the project as it will be the first standalone detention camp with a capacity for at least 3,000 people,” said Hoque, a worker engaged in building washrooms who says there be at least 150 Indian toilets. He further adds that the camp will have facilities such as living quarters, meeting hall.

Other workers, Moinal Hoque, 24 and Aminur Ali, 20, said they have been given December 2019 as the deadline for completion of construction work. Their co-worker, Rijadul Islam, 27, engaged in building a Assam-type school building, says there will be couple of rooms in 500 square foot area. “There will be a hospital with five rooms attached to the camp outside the 30-foot brick wall,” said Noor Kasim, 26, who works there.

A woman worker and a mother of one, Ruma Barman, 26, carrying bricks on her head to the site, said the villagers are happy that the government has chosen the area as they are getting to earn a livelihood. They are also looking forward to setting up shop as markets will come up in the area. Najina Hazang, 33, said, “We are happy that we are employed and get Rs 250 as daily wage”, although the male workers are paid Rs 300 per day.

Most of the villagers support the project. Mobidul Islam, 33, a father of one, said, “Goalpara has people of diverse communities and religious belief. Although the majority is Muslim, everyone in my locality supports the National Register of Citizens and are free of worry as the NRC update is under the supervision of the Supreme Court. He also welcomed the move of setting up the detention camp but added that the government must provide proper basic facilities to the detainees.

But there are exceptions as well. An 88-year-old retired professor of Goalpara College, Uttam Chandra Sarma, a resident of Goalpara town, is not happy with the government move. He said, “NRC is a much needed and welcome move, but as it is a first of its kind project in India the detention camps must be far away from human habitation”.

Recently, the Supreme Court set the detention period of foreigners at three years. On completion of this period, those in detention would be eligible for bail after furnishing a surety bond of Rs 1 lakh each from two Indian citizens, along with their proposed residential address and biometric details.

Union minister of state for home G. Kishan Reddy told Parliament in July that the government had published guidelines for detention centres which stipulate the construction of basic amenities like electricity, drinking water, hygiene, accommodation with beds, sufficient toilets with running water, communication facilities and kitchens. Special attention is to be given to women, nursing mothers and children, he said. Children lodged in detention centres are to be provided educational facilities local schools.