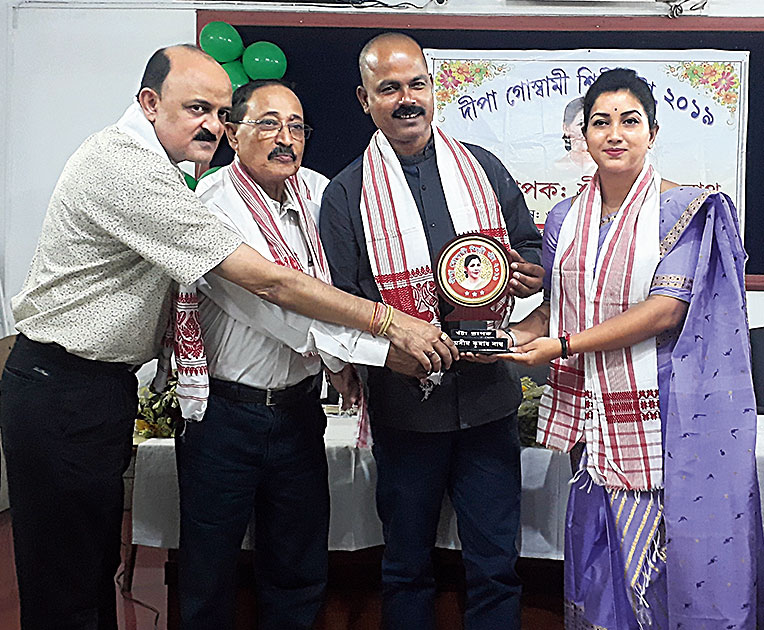 The Dipa Goswami Artist award was conferred on Sipajhar-based theatre artist Axim Kumar Nath here on Friday in the memory of the Assamese actress.

The Dipa Goswami Trust has been conferring this award since 2014 on the unsung heroes in the field of theatre of rural Assam.

The award consists of Rs 10,000, a certificate of recognition, a memento and some books.

“Late Dipa Goswami was a strong lady. I was performing in a theatre when the news of her demise came in. I was shattered. She was like a mother to me. She supported me in every aspect in reel and real life. Still I cannot believe that I am offering floral tribute to her picture today. This is not an ordinary award, a certain kind of emotion is associated with it,” Deka said.

“We are in a mission to develop theatre in the rural areas of Assam on the lines of theatre model outside the state. I am honoured to receive this award. I have dedicated my life to theatre in rural areas. The traditions that are involved in rural theatre should not be taken out into the urban areas as I believe the traditions get diluted upon reaching the urban side. Rural people are still influenced by theatre, that is amazing,” Nath said while receiving the award.

Goswami was known for her role in the Assamese film, Ajan Faquir Saheb, and for her acting genius in serials on Doordarshan. The chief editor of Dainondin Barta, Naren Hazarika, was also present on the occasion.