The decision was taken on Monday night on the recommendations of leading organisations, community and church leaders 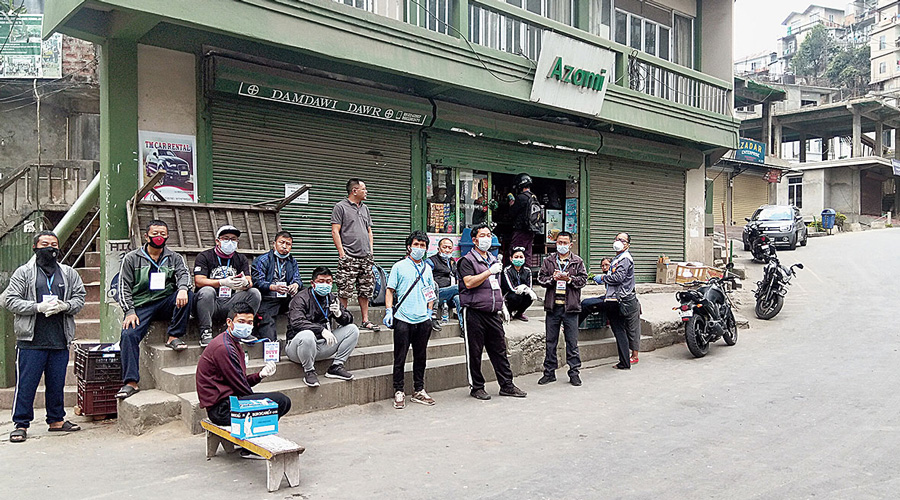 Shops selling essentials and other businesses will be allowed in accordance with guidelines fixed by the local level task force.
File picture
Umanand Jaiswal   |   Guwahati   |   Published 21.04.21, 01:16 AM

The Northeast continued to fortify itself from the onslaught of Covid-19 cases with state governments announcing stringent measures to break the chain of transmission.

The Mizoram government has been the first to announce a near-lockdown for seven days in Aizawl city and ten district headquarters from Tuesday following a recommendation by NGOs, academicians, Church leaders following the rise in Covid cases, 91 testing positive during the day itself, taking the number of active cases to 414 and death toll to 12.

Dr Pachuau Lalmalsawma, the official spokesperson on Covid-19 in the state, told The Telegraph that the decision to impose “partial lockdown” was taken on Monday night on the recommendations of leading organisations, community and church leaders.

The term lockdown, however, was not used in the SOP issued at midnight.

Aizawl district  has 319 active cases followed by Lawngtlai 24 and Lunglei 25. Mizoram has 11 districts.

“It is not a lockdown per se but there is restriction on movement in the city and the district headquarters to break the transmission chain. People are allowed to enter or leave their compounds only with necessary permissions and tests. Time will be fixed for fetching essentials,” he said.

“Anybody body leaving the district headquarters will have to  take permission from the local level task forces for Covid-19 and will have to give their date of journey and destination. Anybody entering the state will also have to compulsorily undergo the RAT and seven-day quarantine after which there will be the RT-PCR or TrueNat,” Lalmalsawma said.

Shops selling essentials and other businesses will be allowed in accordance with guidelines fixed by the local level task force.

However, religious places, educational institutions, parks, gyms, community halls, shopping complexes will remain shut till April 26.    Those returning from aboard or states affected by new Covid19 variant will be quarantined in designated centres if they test positive.

Neighbouring Assam too imposed fresh curbs till April 30 to check the spread, including closure of shops in malls and markets by 6 pm and imposing fines of Rs 1000 for not wearing mask or spitting in public places. The SOP will be reviewed after three-four days.

Chief secretary Jishnu Baruah said though cases are rising the situation is not alarming but he can’t say what will happen six-seven days down the line, hinting at more stringent measures if the surge is not checked.

Restrictions on gatherings have been imposed, maximum 100 for weddings and 20 for funeral and not more than 400 persons in open spaces.

The total number of active cases stood at 6316 till Monday with seven deaths since March 24.

Arunachal has also started RAT at Banderdewa and Hollongi Check Gate from Tuesday and so has Manipur.