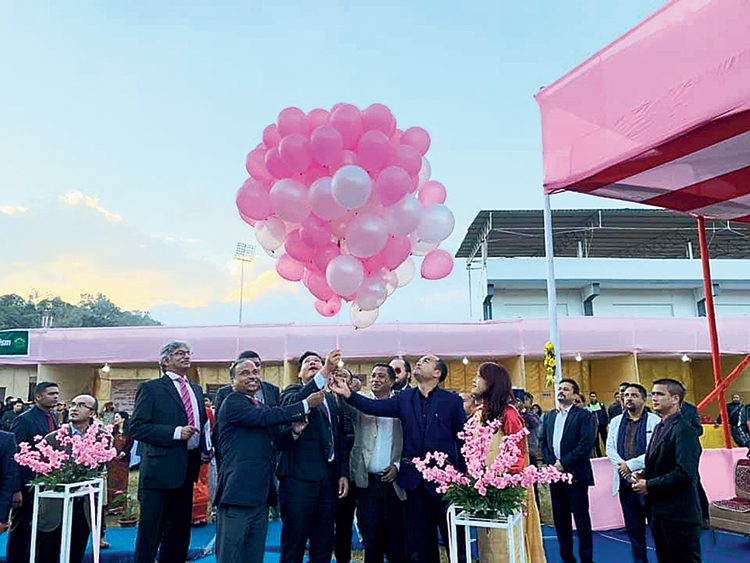 Will they bloom or won’t they? Unlike two years ago, when the cherry blossoms failed to bloom in time for the festival named after them, this year the trees are a captivating profusion of pink and white.

The Meghalaya capital is ready to welcome tourists from the country and abroad to witness the cherry blossoms at the fourth India International Cherry Blossom Festival, with Republic of Korea as partner country. The event was inaugurated by chief minister Conrad K. Sangma at Polo on Wednesday. Ward’s lake will be the other venue.

The four-day event will feature fashion shows and rock concerts, a beauty pageant, an amateur golf tournament and food, besides a K-Pop concert, Korean taekwondo and Korean cuisine.

A highlight of the event will be a summit between a Korean delegation, led by its ambassador Shin Bong-Kil, and the Meghalaya government. It will focus on land reclamation, generating waste to wealth, power generation and use of technology, while some MoUs are likely to be signed.

Conrad said the festival was a step towards giving a different feel to tourists and visitors. “We have the natural resources and we have to utilise them in an effective manner to create value. We want to focus on natural beauty,” he said.

On his recent visit to Bangladesh, Conrad said there is a strong potential to develop tourism so that both sides would gain.

He also said his government has undertaken various tourism-related projects, including laser light show at Ward’s lake, redeveloping the view point near Umïam lake and construction of eco-friendly log houses.

The government was looking forward to build a positive and strong relationship with Korea, he added.

“Korea played an important role in the garments industry of Bangladesh, which is doing very well. We are planning to have a strong relationship with the technologically advanced country for land reclamation, power generation and waste management. In the next few weeks or months, I will be visiting Korea to take the relationship forward,” he said.

The state forest and environment department, Institute of Bioresources and Sustainable Development and Indian Council for Cultural Relations are the major organisers of the annual festival.