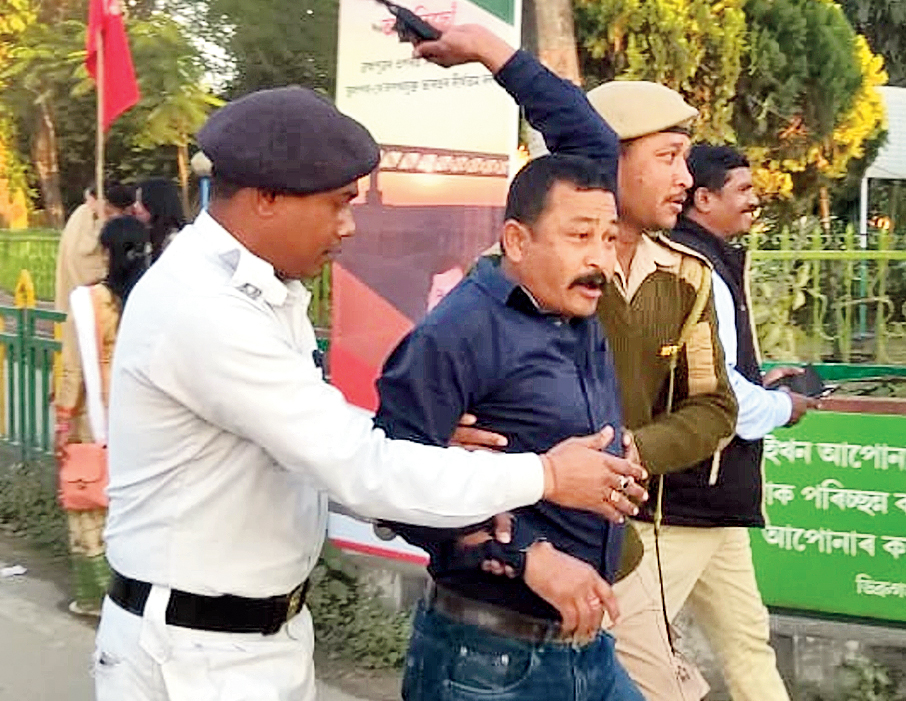 Krishak Mukti Sangram Samiti (KMSS) members showed black flags to Assam chief minister Sarbananda Sonowal on Sunday when he was entering the Chowkidinghee playground here to attend the concluding function of the 61st State Conference of the All Assam Ahom Sabha.

As Sonowal’s convoy made its way to the venue around 4pm, the protesters, who have been agitating against the Citizenship (Amendment) Bill, 2016, raised black flags at the chief minister.

Police personnel, who were initially taken by surprise, quickly swung into action, detained 30 protesters and whisked them away from the spot.

The KMSS, along with other organisations, have been holding an indefinite protest near the Chowkidinghee playground since January 1, demanding the controversial Citizenship (Amendment) Bill, 2016, to be repealed.

Following the show of dissent against the chief minister, the security was tightened inside the meeting venue. The chief minister stayed there for 50 minutes and addressed the gathering for 15 minutes but refrained from mentioning anything about the citizenship bill.

Sonowal, in his address, urged the people of the state to embrace the ideology of Chaolung Sukapha, Lachit Borphukan and Veer Chilarai.

He also announced that a chair will be introduced at Dibrugarh University in the name of Ahom kingdom founder Chaolung Sukapha for research-based studies on the Ahom dynasty.

“Our people should follow the ideology of these people as we have many great leaders who were from Assam. We should not feel weak and should always remember that we belong to a great state where many great leaders were born who showed us how to lead a life,” Sonowal added.

Noted Ahom scholar Dayananda Buragohain requested the chief minister to install a life-sized statue of Sukapha in front of the Assam Secretariat.

The BJP-led government in the state has been facing a huge backlash for its stand against the Citizenship (Amendment) Bill, 2016, that seeks to grant Indian citizenship to persecuted non-Muslim immigrants of Bangladesh, Pakistan and Afghanistan, who migrated to the country till December 31, 2014.

The bill was introduced by the Centre in the Lok Sabha in July 2016 to amend the Citizenship Act, 1955, to make Hindus, Sikhs, Buddhists, Jains, Parsis and Christians, who left Afghanistan, Bangladesh and Pakistan to escape religious persecution, eligible for Indian citizenship.