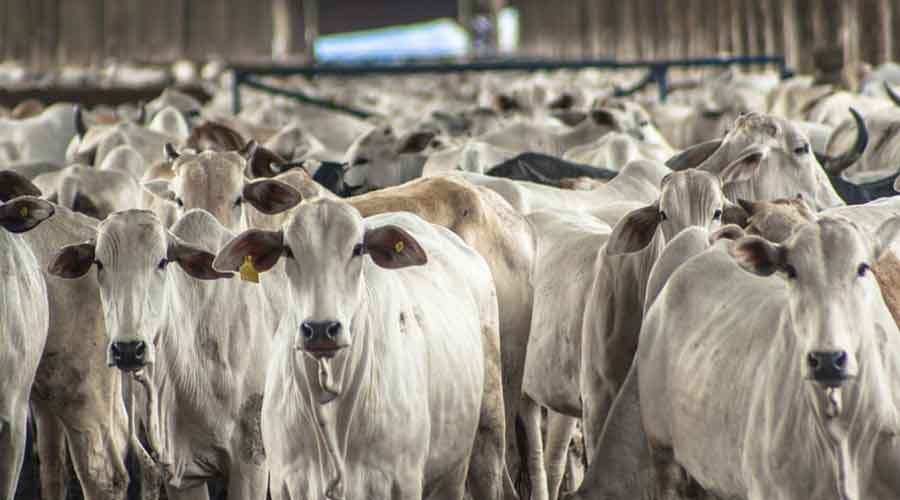 The Assam Cattle Preservation (Amendment) Bill, 2021, has also given the green light to inter-district movement of cattle for animal husbandry and agriculture, barring districts along the international border.
File photo
Umanand Jaiswal   |   Guwahati   |   Published 24.12.21, 12:14 AM

The Assam Assembly on Thursday amended its four-month-old cattle preservation law to allow auctioning of vehicles used for illegally transporting cattle, attaching the properties of the accused and putting the burden of proof on them.

The Assam Cattle Preservation (Amendment) Bill, 2021, has also given the green light to inter-district movement of cattle for animal husbandry and agriculture, barring districts along the international border.

The bill was tabled by the BJP-led state government on December 20 with the objective of amending certain provisions of the Assam Cattle Preservation Act, 2021, passed by the Assembly on August 13, with a view to remove certain restrictions to “facilitate” utilisation of cattle for animal husbandry and agricultural purposes.

The other objective of the amendment bill was to “ensure” strict implementation of the penal provisions of the Act by introducing new terms related to the investigation of cases. The Act seeks to regulate the transportation, slaughter and sale of cattle, beef and beef products.

Although the Opposition had demanded that the bill be sent to a select committee, it was passed by a voice vote after chief minister Himanta Biswa Sarma’s assurance that his government was open to further amendments to check “cruelty to animals and smuggling of cattle”. Raijor Dal MLA Akhil Gogoi was the only dissenting voice when the bill was put to vote in a House where the ruling alliance has 78 of the 125 MLAs.

⚫ Lifting of restrictions on transportation of cattle for animal husbandry and agriculture within the state barring those districts located along the international border.

The principal Act had said cattle cannot be transported intra-state. There was widespread resentment among farmers because it was taking a toll on the local economy.

Chief minister Sarma said his government allowed inter-district transfer of cattle so that activities related to animal husbandry and agriculture were not hindered.

But the restrictions will remain in bordering districts because one of the objectives of the Act was to check cattle smuggling, which has come down drastically but “20-30 per cent smuggling is still taking place”.

Eight of Assam’s 34 districts share an international border — four each with Bangladesh and Bhutan. Cattle is mostly trafficked to Bangladesh.

“Recently, many seized vehicles have been torched near inter-state check gates. So we thought we will sell the seized vehicles by seeking court permission and send a strong message to vehicle owners and those illegally dealing in cattle that Assam is a tough state. We are against cattle smuggling,” he said.

⚫ Allow sale of seized vehicles/conveyance, including boats and other vessels, used to transport cattle for slaughter and other illegal activities through public auction after the accused are produced before the appropriate court during any inquiry or trial.

The police officer having the authority to seize may approach the appropriate court to initiate such a move.

The earlier provision allowed the police to only seize vehicles illegally ferrying cattle. So far 68 vehicles have been seized.

Sarma said auctioning of the seized vehicles would send a strong message to owners that smuggling would not be allowed.

⚫ Allow the investigating officer to attach or seize moveable and immoveable properties of an accused and their family members if there is prima facie reason to believe such assets were acquired within six years prior to the registration of a case under the Act from income earned through sale or transportation of cattle in violation of the provisions.

“The burden of proving that the property so attached or seized has not been illegally acquired through sale or transportation of cattle in violation of any of the provisions under this Act, shall be on the person affected,” a new provision in the amendment bill aimed to check smuggling of cattle says.

The Assam Cattle Preservation Act, 2021, which was notified on September 15, imposes a ban on slaughter of cow, regulates the sale of beef, besides imposing stiff penalties on violators.

Sarma assured the House that his government would take steps to ensure that the livelihood of those dependent on cattle was not affected.

“This will be reflected in the state budget to be presented in April,” he said, adding his government was planning a Rs 1,400-crore project to boost milk production by 10 lakh litres a day.