AJYCP to wage ‘war’ on bill

27 organisations take part in a protest against the Citizenship Amendment Bill, 2019 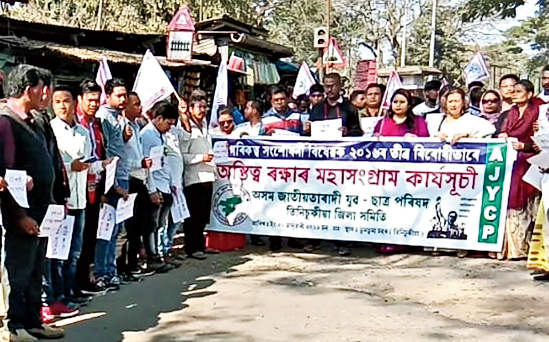 The Asom Jatityatabdi Yuva Chhatra Parishad (AJYCP) took an oath to wage mahasangram (great war) against the Citizenship Amendment Bill, 2019, to safeguard the interests of the indigenous population of Assam and the entire Northeast during a protest here in Upper Assam Tinsukia district on Sunday.

Senior citizens, journalists, teachers, students, social workers and people from all walks of life participated in the protest, which began with a song, Politics no koriba bandhu.

Vijay Barua, a local singer who sang the song, said: “The people of Assam understand the divisive politics of the government. The bill must be withdrawn.” The protesters burnt the copies of the bill and demanded the government to withdraw it immediately.

The AJYCP’s Tinsukia president Surajit Moran said, “We will launch agitation in every village panchayat, block and district level across the state till the bill is withdrawn.”

“This bill is a direct attack on our language, culture, literature and existence. It is ridiculous that Assam chief minister Sarbananda Sonowal is asking to support the bill when every Assamese is protesting against it,” he added.