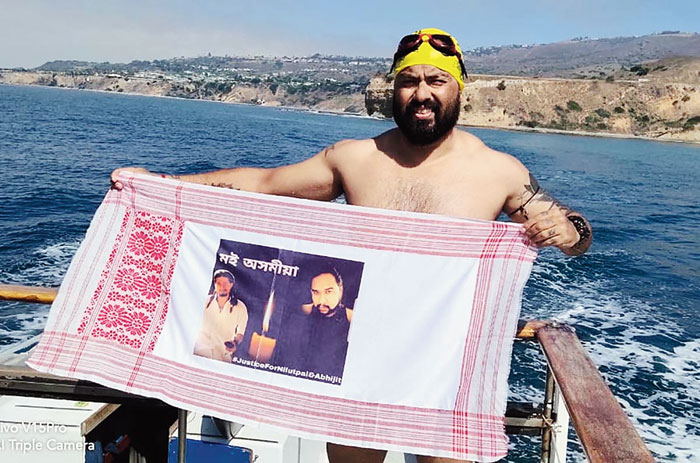 Assam swimmer Elvis Ali Hazarika has successfully crossed the Catalina Channel in the United States in a relay, becoming the first from the Northeast to achieve the feat.

Hazarika, who nearly crossed the English Channel last year, took 10 hours and 59 minutes to achieve the feat, braving the sharks and other sea mammals. His relay partner was Rimo Saha from West Bengal.

“I’ve been waiting for this day for a long time. After a lot of efforts and hours of pushing myself to work harder every day, I have succeeded in becoming the first Assamese to swim across the Catalina channel. We had to go through a lot of challenges, especially because dolphins, whales and sunfish were accompanying us all the way,” an excited Hazarika said after the feat.

The duo started at around 11pm on August 14 from Catalina Island and reached the shore at Rancho Palos Verdes in Mexico on August 15, covering a distance of 21 miles.

The effort was in commemoration of 73rd Independence Day. It was also to pay tribute to two Guwahati youths from affluent families who were lynched in Assam’s Karbi Anglong district last year.

“This is my gift for all on the occasion of Independence Day. I thank all my friends and family, besides Rimo Saha for the constant support and encouragement,” Hazarika added.

In June, 2018, Hazarika swam 29km of the 34km English Channel in an attempt to cross one of the most difficult stretches for the swimmers from across the globe. He broke into the swimming world at a very young age and won medals in several national and international events.

Altogether, he has won more than 60 national and international medals since the 1990s.

He was the youngest to represent India in the Asia Pacific Swimming Championship at the age of nine in 1991. Way back in 2010, Hazarika tried for a berth in the Limca Book of Records when he plunged into the B.P Chaliha Swimming Pool here on August 27 for a 50-hour non-stop swimming marathon.

He had completed a 26-hour marathon in the same pool on August 27, 2008 but since the feat was not recorded then because the existing record is 30 hours, 30 seconds, Hazarika set himself a fresh target. In 2016, he was still as enthusiastic and determined like he was in his teens, when he created waves in the pool, quite literally.

Hazarika had then looked to battle the odds to chase a childhood dream and cross the English Channel, also in August, which appears to be a favourite month for him to accomplish feats.