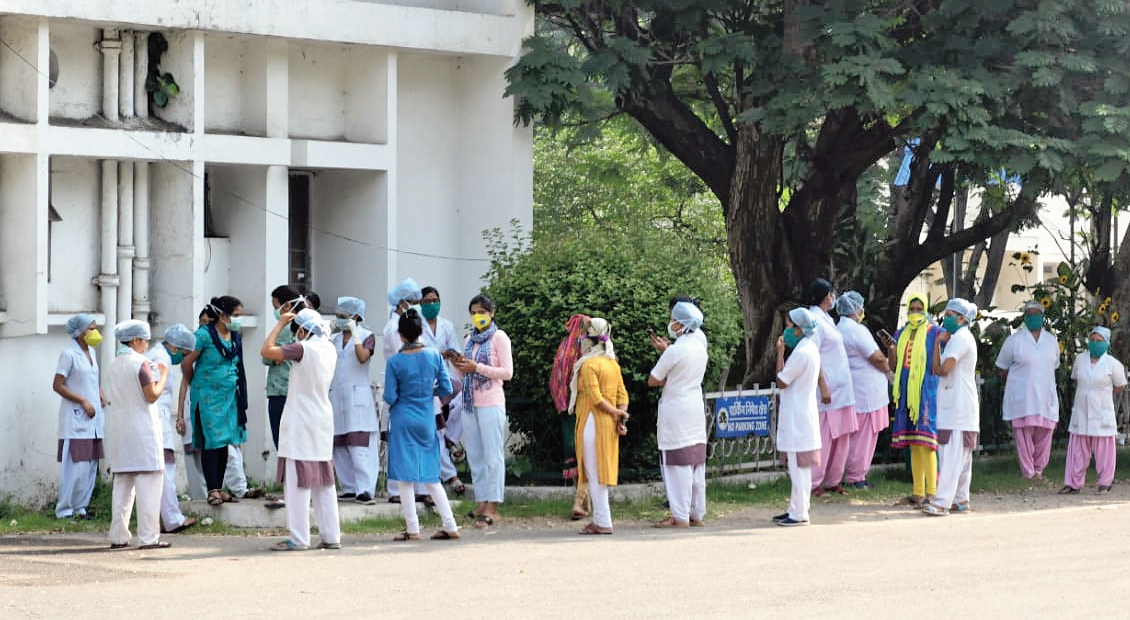 A group of nurses working with Bokaro General Hospital on Monday protested what they called lack of cleanliness and sanitising arrangements in the hospital that is treating Covid-19 patients.

The protesters had a meeting with the hospital administration in which they demanded proper cleanliness arrangements and also asked for accommodation facilities for nurses taking care of Covid-19 patients in the hospital.

The nurses said the hospital must arrange for accommodation facilities for them so that their family members do not get infected because of them. “A lot of garbage is strewn all over the hospital as sweepers went on strike four days back, and an example cleanliness in the hospital is the fact that the bed at the critical care unit (CCU) where a Covid-19 patient died on April 8 night has not been sanitised yet,” a senior nurse said.

“When we pointed to the lack of cleanliness at the CCU, the administration informed us that they will be shifting it to another building on the hospital campus soon. Nurses working in isolation wards with the doctors and treating Covid-19 patients are being sent to their houses directly, increasing chances of infection for their family members

“We have demanded that the hospital administration develop a quarantine facility for such nurses in the hospital so that chances of infection for their family members is minimised, but there’s no headway,” the nurse added.

She said the 200 nurses and 70 trainee nurses are scared over the lack of cleanliness in the hospital.

Mani Kant Dhan, chief of communications, Bokaro Steel Limited, denied that the CCU had not been sanitised.

“After the death of a Covid-19 patient, the CCU was sanitised on the same day and even the next morning. Thereafter regular and intensive sanitising of the hospital campus and casualty wards is being done according to protocol laid down by the medical administration and public health officials.”

Regarding the quarantine demand, Dhan said: “Already several doctors and medical staff have been quarantined.”

“Quarantine is being done according to government guidelines,” said Dhan, claiming that all issues raised by the staff nurses have been sorted out. “In spite of constraints in adequate number of personal protective equipment (PPE), we have arranged them and provided them to our staff. It would be wrong to say that PPE are not being provided,” he said.

Bokaro deputy commissioner Mukesh Kumar also sent out a stern warning to people regarding rumours being spread on social media platforms or other mediums on lack of facilities at the Bokaro General Hospital.