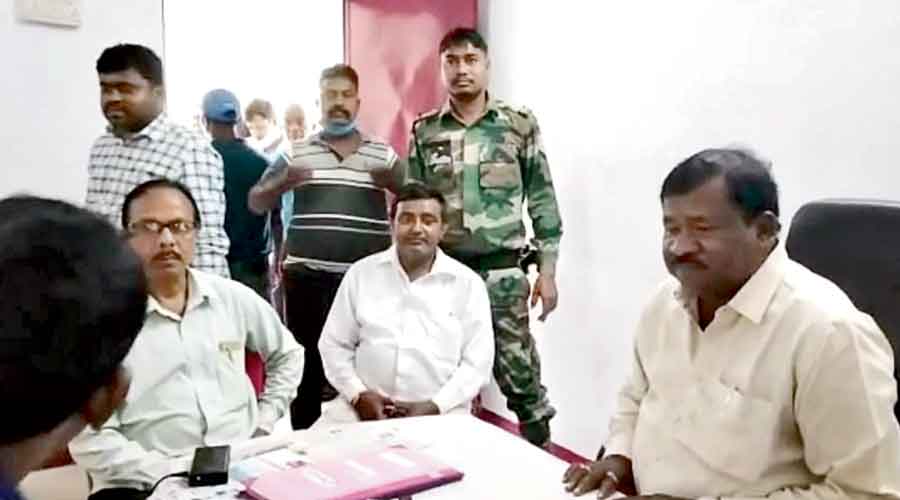 A ruling JMM legislator has lodged an FIR against a former office-bearer of the party and a businessman for allegedly offering him money to destabilise the UPA government in Jharkhand.

Ghatsila (in East Singhbhum district) MLA Ramdas Soren in an FIR lodged with Dhurwa police station in Ranchi on October 12 has accused former JMM treasurer Ravi Kejriwal and businessman Ashok Agarwal of offering him money at his Ranchi residence to leave the JMM so that they can start a new party and form the government along with the BJP in Jharkhand and also offered him the post of cabinet minister.

Ramdas has also alleged that Kejriwal had contacted him on mobile phone two-three times seeking to know the amount of money he needed to leave the JMM and join hands to form a new party. The FIR alleges that there is a conspiracy to topple the elected government in the state.

According to sources in the JMM, Kejriwal was the treasurer of the party’s central committee and was considered close to both party chief Shibu Soren and chief minister Hemant Soren. Kejriwal was expelled from the party in August 2020 after complaints of financial irregularities. Kejriwal also faced accusations of raising funds for the Soren family during the erstwhile Raghubar Das-led BJP government.

“An FIR has been registered and police are carrying out a probe. Hatia SP Vineet Kumar is investigating the case,” he said.

State drinking water and sanitation minister and JMM lawmaker Mithilesh Thakur said that such attempts by vested interests would not be able to topple their government.

“We are in absolute majority and all the MLAs of constituent parties (JMM, Congress, RJD) are in perfect coordination and would not fall victim to allurement by any party,” said Thakur.

Rajya Sabha MP and Jharkhand BJP unit president Deepak Prakash termed it as an internal matter of the JMM. “It is purely an internal JMM matter and the BJP has got nothing to do with this issue,” said Prakash.

This is the second such allegation to surface in the last three months.

Congress legislator from Bermo Anup Singh alias Jaimangal had lodged a complaint at the Kotwali police station on July 22 against some people trying to lure ruling party MLAs to topple the government, who were staying in Ranchi hotels. Following the complaint, the special branch of the state police carried out raids in several hotels and arrested three persons from a hotel along Lake Tank Road in Ranchi.

The arrested accused Abhishek Dubey from Palamau, Amit Singh and Niwaran Prasad Mahato (both from Bokaro) were charged with luring MLAs of the Congress with cash and hatching a conspiracy to topple the JMM-led UPA government. A case had been registered against the accused under Sections 419, 420, 124A, 120B and 34 of the IPC, Section 171 of the Representation of the People Act and Sections 8 and 9 of the Prevention of Corruption Act.

The Ranchi SSP said the police are still continuing their investigation into the July case.

In the 81-member Jharkhand Assembly, JMM has 30 MLAs, Congress 18 and RJD 1, which makes the ruling UPA tally 49. The Opposition BJP has 26 MLAs while its ally Ajsu has 2. The majority mark is 41.