So far 43 oxygen special trains that carried 2,420 tonnes of LMO to various destinations across the county has been sent during the past fortnight 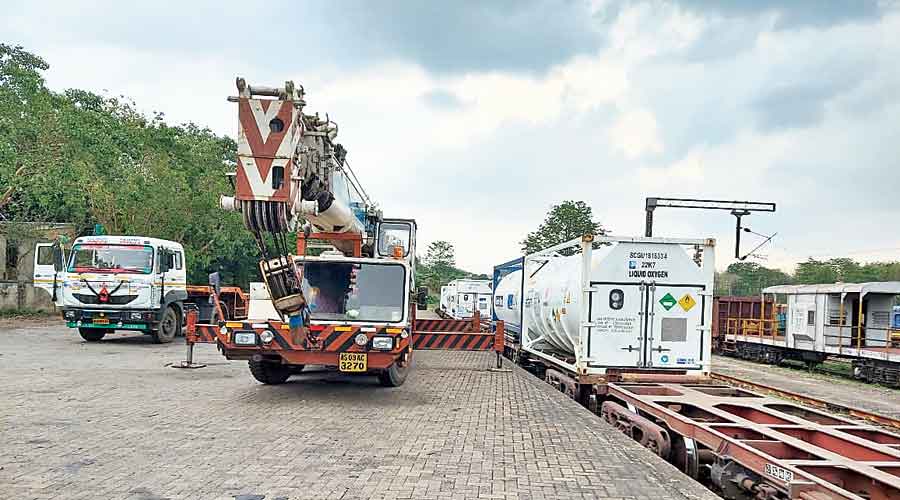 A container filled with liquid medical oxygen is being loaded on a Dehradun-bound oxygen special train at Tatanagar station on Tuesday
Telegraph picture
Achintya Ganguly   |   Ranchi   |   Published 12.05.21, 12:42 AM

The steel plants of Jharkhand continued to send liquid medical oxygen to different states so that those can cope up with the increasing demand of oxygen during the second phase of the Covid-induced pandemic.

One oxygen special train with 120 tonnes of liquid medical oxygen (LMO), filled in six containers, left Tatanagar station for Dehradun in Uttarakhand on Tuesday while another such train with same amount of oxygen had also left the same station for Bangalore on Monday.

Informing this, a release issued by the South Eastern Railway added that they had so far sent 43 such oxygen special trains that carried 2,420 tonnes of LMO to various destinations across the county during the past fortnight or so.

“Those trains carried 2,420 tonnes of liquid medical oxygen in 114 tankers and 78 containers,” the release further informed, adding LMO was mostly sent from Bokaro Steel Plant in Bokaro and Tata Steel Plant in Jamshedpur, besides from Rourkela Steel Plant in Odisha that also comes under the jurisdiction of SE Railway.

Of those 43 oxygen special trains, 22 were sent to Uttar Pradesh, 10 to Madhya Pradesh, six to Haryana, three to Delhi region and one each to Karnataka and Uttarakhand, the railways informed, giving details.

Meanwhile, cargo aircrafts of the Indian Air Force have also been dropping empty oxygen tankers at Birsa Munda Airport in Ranchi that are also sent to Bokaro and Jamshedpur for refilling  and subsequent dispatch by either road or rail.

“About 139 oxygen tankers have been airdropped here since April 24,” airport manager Vinod Sharma informed when asked and added that refilled tankers were, however, being sent to various destinations either by road or rail and not by air.

This exercise helps save time as bringing empty tankers would take much more time, he further informed, adding the tankers that are dropped in Ranchi are of capacities of either 10 or 20 tonnes.