Advertisement
Home / Jharkhand / Jharkhand stares at acute vaccine shortage
Only 35,000 doses remain for use on Wednesday

Barely 35,000 doses left for use on Wednesday, health authorities may have to stop immunisation in several regions of the state 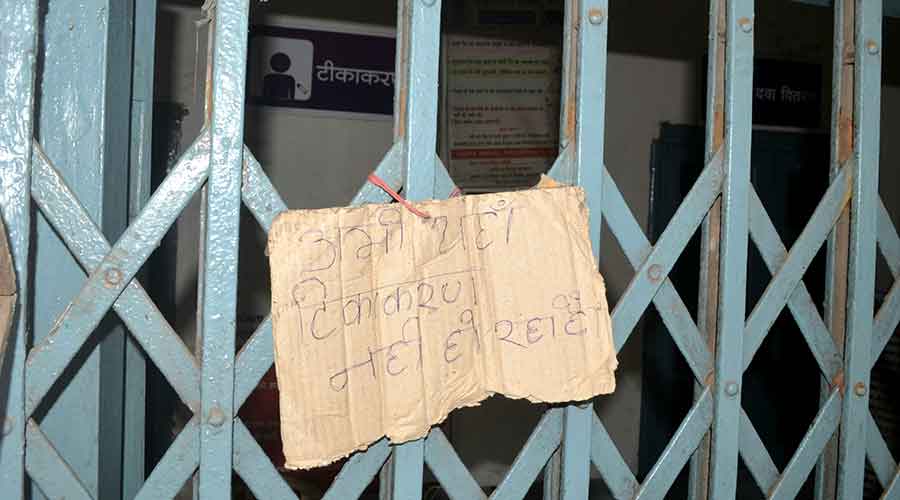 A vaccination suspension notice at a jab centre at Rajbari, Jharia in Dhanbad on Wednesday.
Picture by Shabbir Hussain
Our Correspondent   |   Ranchi   |   Published 30.06.21, 09:22 AM

Jharkhand may have to put Covid-19 immunisation drive on hold in many parts of the state from Wednesday as it stares at a shortage of vaccine doses supplied by the Centre, health officials said on Tuesday, adding that the next supply of vaccines is likely to reach the state on July 2.

By end of Tuesday, vaccination centres across the state had utilized almost the entire stock available.

According to a state health department report, the first dose of vaccine was administered to 36,342 residents and the second dose to 10,724 residents.

“The very few vaccine doses left with us will be used on Wednesday. We will resume vaccination of Jharkhand residents as soon as the vaccine supplies reach us,” said Dr Siddharth Tripathi, the nodal officer of health department’s Information, Education and Communication (IEC) wing.

On Tuesday, the state government requested the Centre to cut down on the quota of Covid-19 vaccines for private players from 25 per cent to 5 per cent, citing lack of private healthcare facilities in rural areas and a high BPL population in the state with limited purchasing power.

In a letter addressed to the Ministry of Health and Family Welfare, additional chief secretary Arun Kumar Singh stated that private hospitals were unable to utilise the 25 per cent quota of vaccines fixed for them and the government will be in a better position to use the vaccines if the quota of free vaccines provided to the state is increased to 95 per cent for Jharkhand.

Meanwhile, the active caseload of Covid-19 dropped below the 1000-mark in the state on Tuesday as at least 148 Covid patients recovered while 94 fresh cases of infection surfaced across the state on the day, the NHM stated in a bulletin.

As per the NHM bulletin, the state also reported two Covid casualties, one each in Dhanbad and Bokaro, which took the Covid toll to 5113. With 20 cases, East Singhbhum was the only district to report a double-digit-spike on Tuesday. The district also reported 21 recoveries, which brought the active caseload there down to 108.

While Pakur did not report fresh Covid cases, Ranchi reported a spike of three cases against 45 recoveries. The active caseload in Ranchi, the worst-affected district in terms of caseload and casualties, dropped to 252 – the highest in the state.