Cops on contract, on dharna for weeks at Morabadi, likely to call off agitation 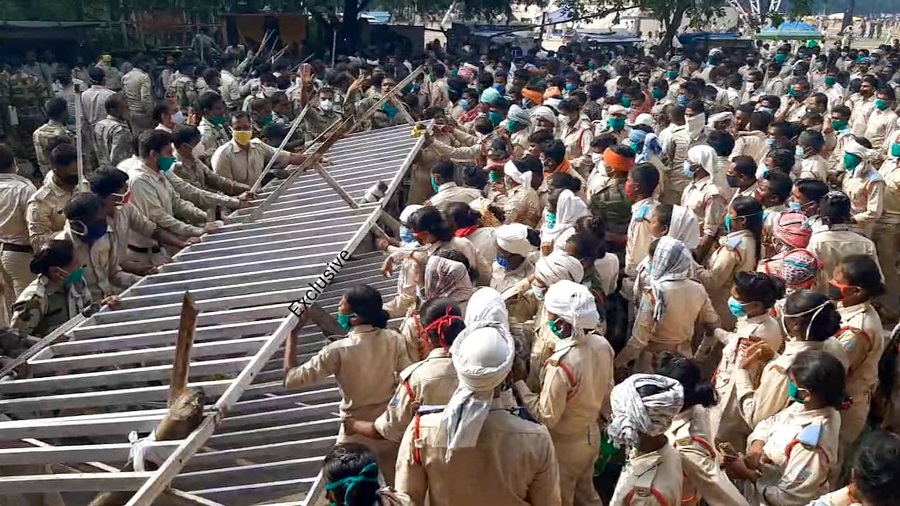 The state government will work towards fulfilling the genuine demands of thousands of assistant police personnel, the state’s water resources minister, Mithilesh Thakur, assured them at a meeting on Saturday.

After a meeting with the protesters, Thakur told reporters that the talks with the police assistants remained positive. “I have told them that they should not hold any grudges against the current government. At the same time, I assured them that the government will certainly consider all their genuine demands, but it requires time. They seem to have been convinced and should soon end their protest,” said Thakur, who resumed office about a month back after recovering from Covid-19.

The protests by police assistants, hired on contract by the former BJP-led  government in 2017, turned violent on Friday after they clashed with police while attempting to march towards Raj Bhavan and the chief minister’s residence. At least a dozen people were injured in the clash.

On Saturday, Chief minister Hemant Soren appointed Thakur to hold negotiations after which he headed to Morabadi ground where over 2000 protestors have been camping for more than a week to hear their concerns.

Thakur said their key demands included regularisation of jobs. “This apart, they also wanted increased honorarium and facilities at par with regular police. I have noted their demands and will discuss with the chief minister. We should be able to workout an amicable solution, but it will take time,” said Thakur.

The minister said generating employment was one of the key mottos of the state government which would explore avenues where these people could be accommodated keeping the police force as the first choice.

“But all these are policy decisions and need time,” he reiterated.

Till the time of filing this report, the protestors had not called off their stir. Rakesh Minz, a 26-year-old assistant policeman from Latehar, said, “Our leaders will take a call soon after discussing with all stakeholders.”

Notably, assistant police personnel were hired on contract in 2017 on monthly honorarium of Rs 10,000 by the former BJP government headed by Raghubar Das. They were then assured permanent reinstatement gradually. However, their contract period ended in August this year, and these have not yet been renewed by the JMM-Congress-RJD government.