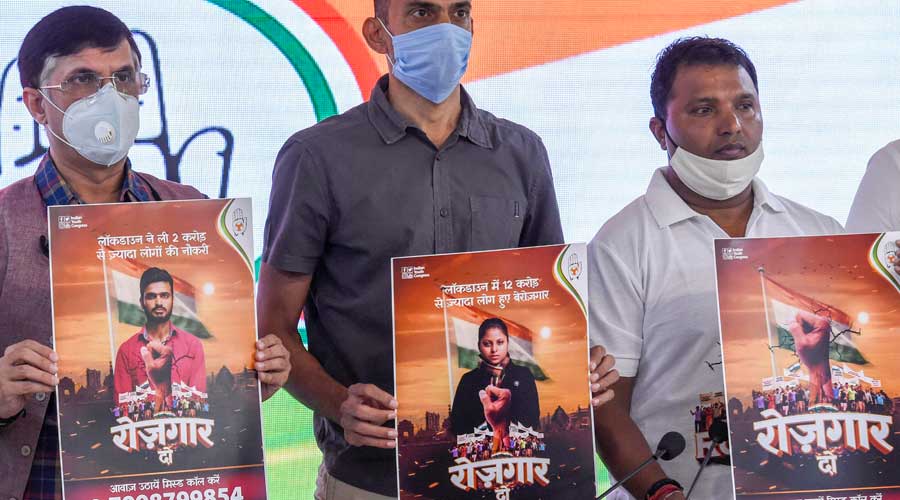 Congress leaders release posters of the 'Rozgar Do' campaign at the AICC headquarters in New Delhi on Saturday.
PTI
Our Special Correspondent   |   New Delhi   |   Published 30.08.20, 01:05 AM

The Youth Congress on Saturday launched the second phase of its nationwide “Rozgar Do (Give Employment)” campaign.

The Youth Congress will mobilise jobless youths, hold demonstrations, run signature campaigns and approach even BJP legislators to ensure that real concerns like unemployment and the economic crisis dominate the public discourse. Youth Congress in-charge Krishna Allavaru said the situation had worsened because of Prime Minister Narendra Modi’s mishandling of the economy and the unplanned lockdown.

Youth Congress chief B.V. Srinivas said: “Modi wore German goggles worth Rs 2.5 lakh to watch the solar eclipse. We will give him any spectacles, even if it is worth Rs 10 lakh, with which he can see jobless youths. He is enjoying his life — shooting for hours for a one-minute video with peacocks, changing clothes six times. But he can’t see the rising unemployment. We will force him to address this pressing problem.”

The Youth Congress also released songs and posters to be used during the campaign. One song said: “Bhashan se pet nahin bharta, rozgar do/Pet bhi khali, jeb bhi khali/Bata do koi sarkar ko rozgar do (One can’t fill one’s stomach with speeches, give employment/ Our stomachs are empty, as are our pockets. Someone tell the government to give us employment.)”