Will take decision after receiving order from BJP top brass this evening: Yediyurappa on CM issue 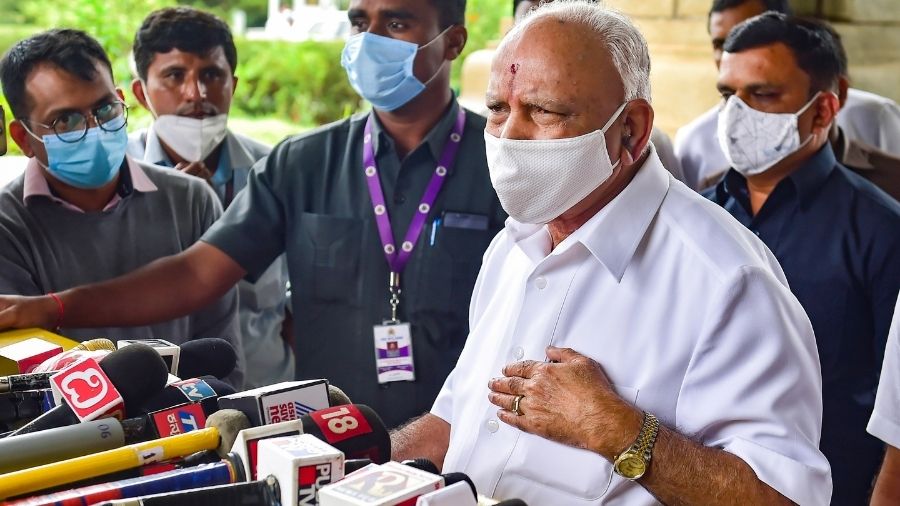 Karnataka Chief Minister B S Yediyurappa on Sunday said he will take an appropriate decision, once he receives directions from the BJP high command this evening, regarding his continuation in the post.

"By evening once it comes, you will also get to know about it, once it comes I will take an appropriate decision," Yediyurappa said in response to a question whether the directions from the party high command in Delhi were expected today.

To a question on pontiffs holding a mega conclave in Bengaluru Sunday, which is seen as expressing solidarity with him, he said, "there is no need for pontiffs to hold any meet, I have confidence in PM Narendra Modi, Home Minister Amit Shah and BJP national President J P Nadda."

Questioned about a Dalit Chief Minister replacing him, Yediyurappa said, "I'm not the one to decide about it, it is for the high command to decide.

Let's first see what decision they will take today..."

Asked whether he was satisfied with his work for two years, he said, "if you are satisfied that's enough for me."

Indicating that Monday might be his last day in office, Yediyurappa had recently said that based on the instructions that the central leaders will give him on July 25, he will get on with "his work" from July 26.

His government will complete two years in office on July 26.

Meanwhile, scores of pontiffs are expected to participate in a "maga conclave" to be held here on Sunday, coinciding with the possible decision by the BJP central leadership on his exit.

Dingaleshwar Swamiji of Balehosur mutt, who had held a press meet here on July 23 to inform about the conclave with other Swamijis, had refused to connect the event directly with the possible leadership change, but it is being widely seen as an attempt to muster support to Yediyurappa and send out a message.

Yediyurappa is in flood and rain ravaged Belagavi district to review the relief and rescue operation there.

Noting that he will be visiting people affected by rains and floods, the Chief Minister said after visiting some affected villages and analysing the situation there, he will be heading back to Bengaluru.

"By the god's grace, rains have receded both yesterday and today and if the situation continues in the same way for the next couple of days, I'm confident that things will come under control," he said, adding that rains receding in Maharashtra is a good sign.