Advertisement
Home / India / With friendship we can solve any problem, says Sheikh Hasina

With friendship we can solve any problem, says Sheikh Hasina 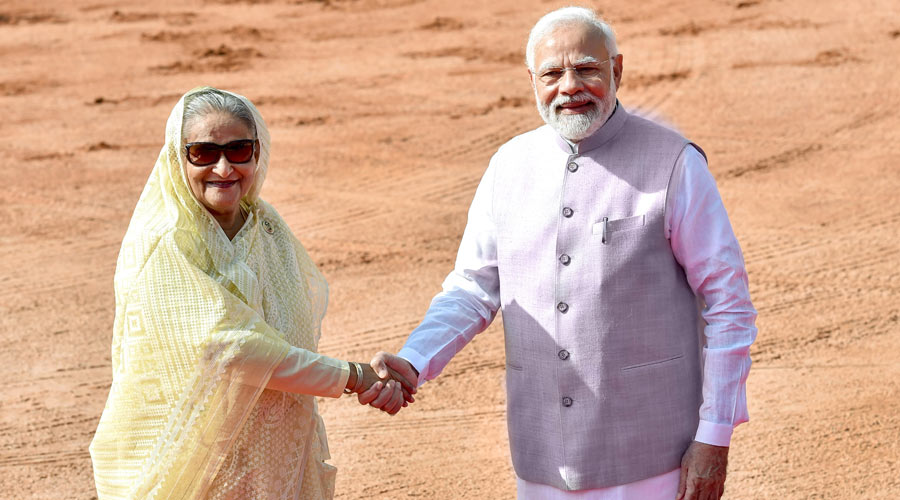 With friendship one can solve any problem, Bangladesh Prime Minister Sheikh Hasina said on Tuesday as she embarked on a four-day State visit to India.

Prime Minister Narendra Modi welcomed Hasina at the Rashtrapati Bhawan forecourt here where she was accorded a tri-services guard of honour.

Interacting with reporters at the Rashtrapati Bhawan, Hasina said her talks with Modi would focus on improving the condition of the people in their respective countries, poverty alleviation and economic development, reports PTI.

"Our main aim is to develop the economy and fulfill the basic needs of our people. With friendship you can solve any problem. So we always do that," Hasina said. She also offered floral tributes at Rajghat, the memorial to Mahatma Gandhi

Hasina also visited Nizamuddin Aulia Dargah in the national capital on Monday and is scheduled to travel to Ajmersharif on Thursday.

Bangladesh is now India's biggest trade partner in South Asia and the bilateral trade has grown from USD 9 billion to USD 18 billion in the last five years. It has also become the fourth largest export destination for India with the exports registering a growth of over 66 per cent from USD 9.69 billion in 2020-21 to USD 16.15 billion in 2021-22.