UP CM counts jobs, crackdown on criminals as main achievements 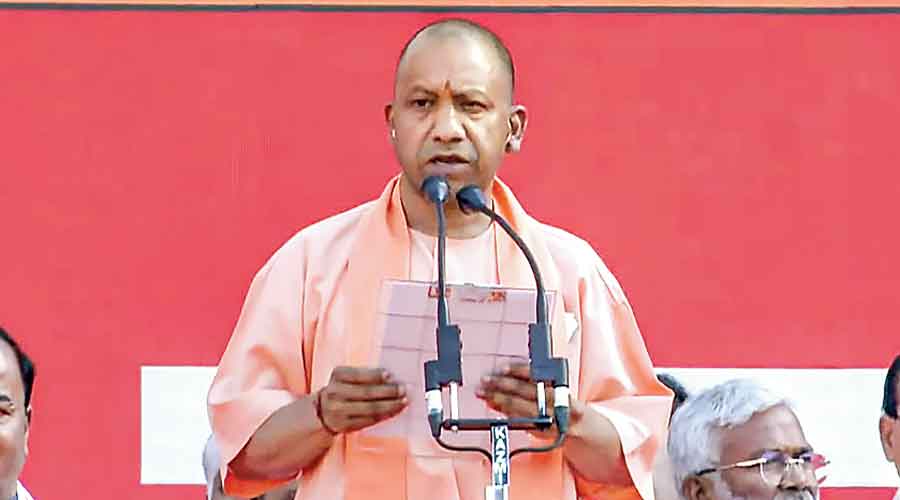 Illegal property of criminals worth Rs 844 crore has been seized or demolished, Rs 12,537 crore paid to sugarcane farmers and more than 10,000 government jobs were given in the first 100 days of the Yogi Adityanath dispensation in Uttar Pradesh during his second term.

Adityanath, who presented a report card on completion of 100 days in office on Monday, also said 27,000 people got private jobs through fairs fecilitated by the state government.

Flanked by deputy chef ministers Keshav Prasad Maurya and Brajesh Pathak, the priest-turned-politician thanked people for bringing the BJP back to power, a feat repeated in the most populous state after 37 years.

"In the 100 days, illegal property of criminals worth Rs 844 crore has been seized or demolished. As many as 68,874 encroachments and 76,196 illegal parking spots have been removed. Over 74,000 loudspeakers were removed without any resistance," he said.

The opposition Samajwadi Party and the Congress, however, challenged the claims of the chief minister, saying people are frightened due to burgeoning inflation, unemployment and the state of law and order.

Speaking on law and order, he said his government has established rule of law in the state which was battling misgovernance, corruption, casteism and dynasticism.

The state has been made riot-free and festivals are celebrated peacefully, he added.

He also said the work on Bundelkhand Expressway has been completed, while the work is in progress on Ganga Expressway.

The chief minister added that the government has constructed more than 1 lakh houses for the poor. So far, 44 lakh houses have been built, he said.

In the field of education, 1.88 crore children have been enrolled in government schools, taking total enrolments to 4 crore so far.

For farmers, he said a sum of Rs 47,265 crore was transferred under PM Kisan Samman Nidhi and 58 Krishi Kalyan Kendras were established in different districts under his rule.

Talking about development in the medical sector, Adityanath said to achieve the target of 'One district-One medical college', construction of medical colleges in public-private partnership (PPP) mode in the districts of Maharajganj and Sambhal has started.

He added that piped water project has been implemented in 574 villages, providing connection to 3.76 lakh households in the state.

Not amused by the claims of the Adityanath dispensation, Congress leader Priyanka Gandhi Vadra said it may distribute scrolls of paper about its "false" achievements, but promises remain "unfulfilled" with work being done at a very slow pace.

"Farmers committing suicide due to bribery; 10,000 vacancies promised, only 940 recruitments done; people upset due to power cuts; promises made to women and farmers also not fulfilled," she said.

Samajwadi Party chief Akhilesh Yadav too in a Hindi tweet attacked the state government, saying Uttar Pradesh has been "ruined by its deceit" (Gorakhdhanda).

UP Congress spokesperson Ashok Singh, in a statement, said, "The government is celebrating completion of 100 days by rubbing salt into the wounds of the public. "

"People have been frightened by inflation, unemployment, law and order and economy. Instead of working on a pro-people agenda, the government is busy spreading the agenda of the Rashtriya Swayamsevak Sangh," he said.