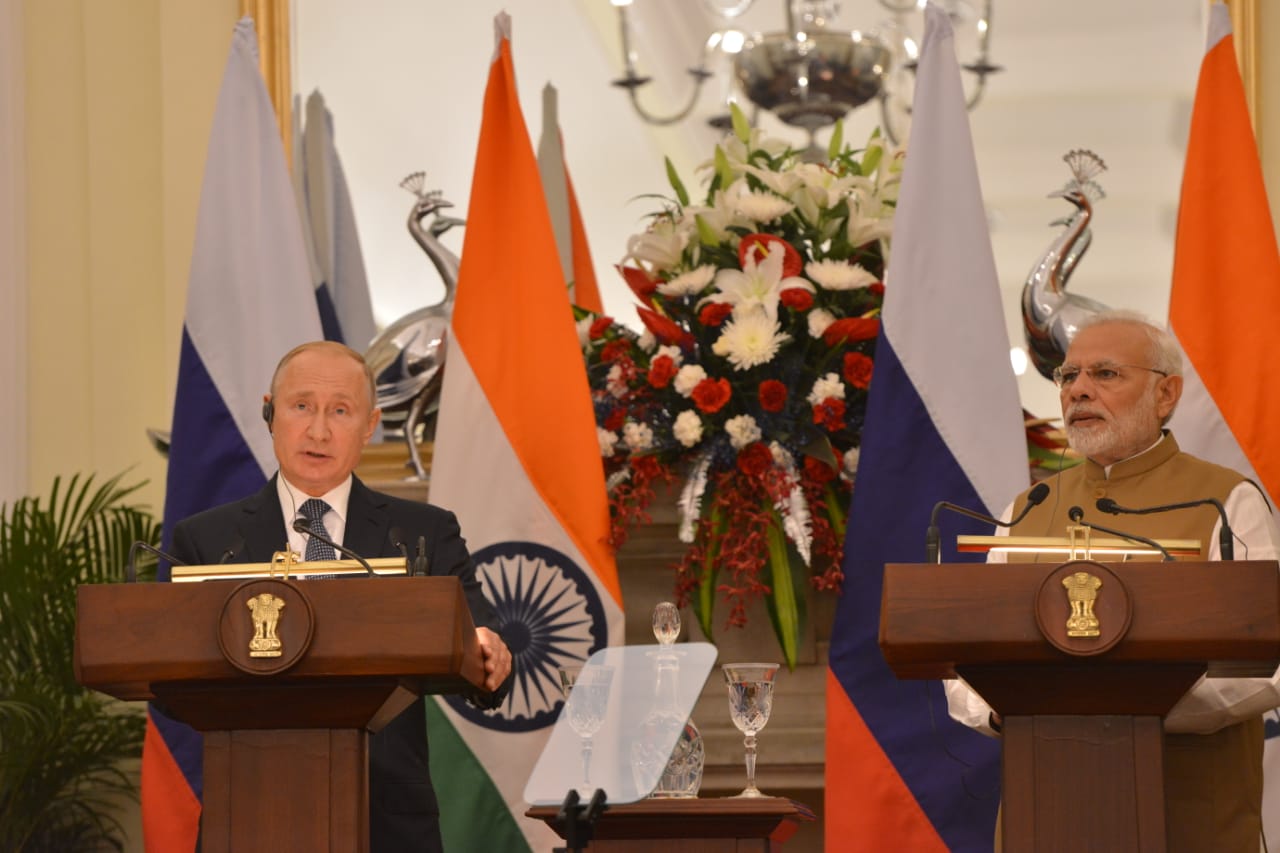 The US presidential waiver on weapons deal with sanctions-hit Russia is intended to “wean” countries like India off the Russian equipment, the White House said even as New Delhi signed a $5 billion deal to purchase S-400 Triumf air defence systems from Moscow.

The deal was sealed in New Delhi on Friday during the visit of Russian President Vladimir Putin for an annual summit with Prime Minister Narendra Modi.

In a guarded reaction, the US said on Friday that its intent to slap sanctions against Russia was not aimed at causing damage to the military capabilities of its “allies or partners,” shortly after India concluded the deal for the purchase of Russian missile defence systems.

The S-400 missile defence system would give India's defence a cutting-edge security against any missile attack by its enemies.

”The (CAATSA presidential) waiver is narrow, intended to wean countries off Russian equipment and allow for things such as spare parts for previously-purchased equipment,” a White House National Security Council Spokesperson told PTI hours after the conclusion of the S-400 contract.

President of US-India Strategic and Partnership Forum Mukesh Aghi said: “India lives in a very turbulent and nuclear-powered region. S-400 provides that assurance and is compatible with its current platform. Friends understand that these discussions with Russia started several years ago hence I do not believe US will impose sanction on India”.

But for the presidential waiver, Countering America's Adversaries Through Sanctions Act or CAATSA sanctions come into place in the event of a major purchase like S-400 missile defence system. Ahead of the deal, the US had urged India not to purchase Russian defence systems.

”The Administration has indicated that a focus area for the implementation of CAATSA Section 231 is new or qualitative upgrades in capability – including the S-400 air and missile defense system,” the White House NSC Spokesperson said.

Last month, the US had imposed sanctions on China for the purchase of S-400 from Russia.

”Our recent action to sanction a Chinese government entity for an S-400 delivery underscores the seriousness of our resolve on this issue. The waiver authority is not country-specific. There are strict criteria for considering a waiver,” said the spokesperson.

The State Department, which is tasked with reviewing the deal and initiating the process of sanctions or waiver under CAATSAA, and make recommendations to the president, did not respond to questions.

However, an industry source said the law is ambiguous about “when a waiver is necessary so this can be avoided for years”.

Defence deal with Russia minus drama

The National Defense Authorization ACT (NDDA) 2019 gives the president the power to waive of the CAATSA sanctions if it is a national security interest.

In fact, over the last decade, India the top arms purchaser of the world, has gradually reduced its dependence on Russian weapons. It now stands at about 60 per cent, which is much lower than it was a decade ago.

As part of its diversification plan, India has increased its purchase of arms from the US to the tune of $18 billion.

A presidential waiver can also be given if a country is cooperating with the US government on other security matters critical to US strategic interests. Experts believe that is exactly the case and one of the main reasons for US designating India as a 'Major Defence Partner'.

”I don't like to make predictions in today's Washington but sanctioning India, and surrendering the Indian defence market to Russia, would have exactly the opposite of the intended effect of CAATSA. No American interest group benefits from sanctioning India,” Benjamin Schwartz from US India Business Council said.

Aparna Pande, from the Hudson Institute think-tank, said “I believe what is more likely is that even though India will sign the S-400 deal, it will delay payment, etc so that the sanctions don't come into effect.

”This way India maintains its strategic autonomy and historical ties with Russia and yet ensures its strategic relationship with the US is not impacted either,” Pande said.