Chief minister K. Chandrashekar Rao said a review meeting will be held of May 15 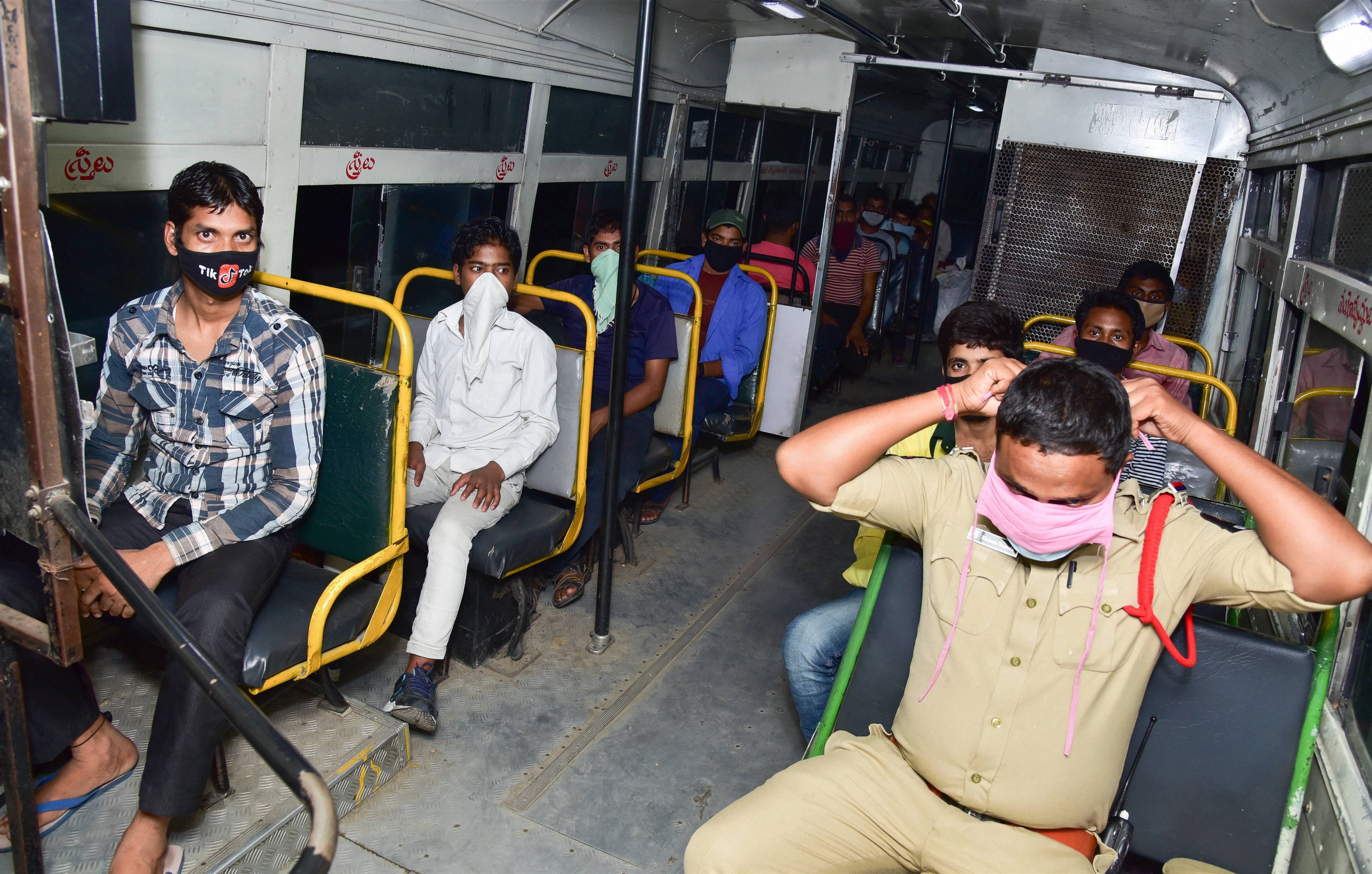 A police personnel escorts migrant workers as they board a bus for a railway station to travel to their native places, during the ongoing Covid-19 nationwide lockdown, in Hyderabad, Tuesday morning, May 5, 2020.
PTI
PTI   |   Hyderabad   |   Published 06.05.20, 04:55 AM

Telangana chief minister K. Chandrashekar Rao on Tuesday announced extension of the lockdown in the state till May 29 but with relaxations in rural and municipal areas.

Rao, who was speaking on Tuesday night after a marathon meeting of the state cabinet, said majority opinion in the state is in favour of extending the lockdown.

'We are extending lockdown in our state till 29th May. We will definitely implement it seriously. Night curfew will be there in the entire state. At any cost. There will be serious curfew after 7pm,' he told reporters.

Rao said 1,096 people have tested positive for the virus as on Tuesday evening, adding that 628 people have been discharged after treatment. As many as 439 people are undergoing treatment, he said.

Number of deaths stood at 29.

Telangana is flattening the curve and it should be brought to zero, he said.

Out of the 33 districts in the state, Hyderabad, Medchal and Ranga Reddy districts (which largely form the Greater Hyderabad Municipal Corporation area) are the cause of concern with regard to the spread of the virus, he said.

Rao said 66 per cent of the total cases in the state are reported from the three districts.

Six districts in the state are in red zone but the other three districts (except Hyderabad, Medchal and Ranga Reddy) may move out of the red zone in the next few days, he said.

Fresh cases are also being reported from the Hyderabad, Medchal and Ranga Reddy districts, he said.

The state government is fully equipped to deal with the virus having acquired PPE and other equipment, he said.

The state government would implement the guidelines issued by the Centre with regard to activity in red, orange and green zones, he said.

Agriculture activity and related shops would remain open, he said.

Rao said he will hold a review on May 15.

He said all shops in mandal headquarters and villages below that level (broadly rural areas) in green and orange zones can be opened.

In municipal towns, only 50 per cent of shops would be allowed to open, he said.

All shops would get an opportunity to open as per a lottery system. However, social distancing should be maintained strictly. The shops would be open from 10am to 6pm as night curfew would be implemented in the entire state, he said.

Recalling that class 10 exams stopped midway due to the lockdown, he said the government would appeal in the high court for permission to conduct the test for remaining papers.

The state government would take all precautions in view of Covid-19 in conduct of exams, he said.

Talking about migrant workers, he said the state government would facilitate their travel if they want to return to their native places.

However, lakhs of labourers cannot be sent at once as the Telangana government has to send a list of workers to the state where they would go, he said.

Rao said he has spoken to chief ministers of UP, Bihar and other states, adding it will be difficult for the states concerned to handle the arrival of a huge number of workers at once as arrangements have to be made vis-a-vis.

The chief minister further said 11 trains were being sent from Hyderabad to different states on Tuesday.

Highlighting that economic activity is going to start in the state, he appealed to the migrant workers to try to stay back as they would be able to find work soon.

He said some 1,200 workers would be brought from Bihar to work in rice mills in the state. About 20,000 workers who are willing to come are also going to come to the state, he said.

Rao announced the opening of liquor shops in the state from Wednesday, except 15 shops in containment zones.

However, social distancing and masks are a must, he said.

Talking about a new electricity bill reportedly proposed by the Centre, he voiced strong opposition to it, alleging that it would take away the powers of the Centre.