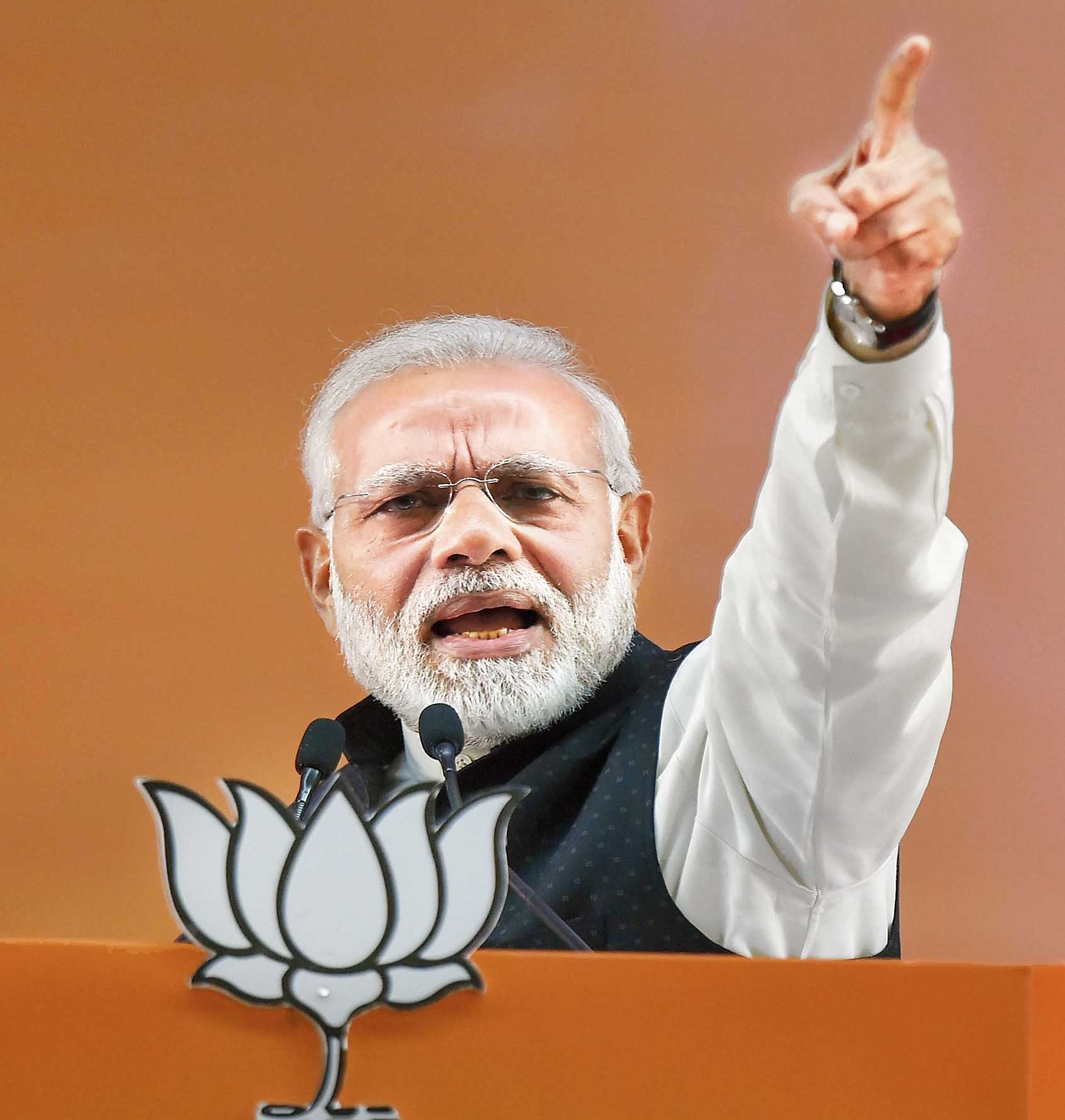 Narendra Modi on Saturday said Brand Modi alone could not ensure victory and, after four-and-a-half years at the helm, invoked “collective leadership” in his address to the BJP’s last national convention before the 2019 elections.

The reference to “collective leadership” came at the end of his concluding speech at the convention, where the political resolution and other speakers had appeared to bank solely on Modi to win. Party chief Amit Shah had said the BJP was “invincible” because it had the “world’s most popular leader”.

“Bhaiyon behnon, hum na bhoolein, hamari party collective leadership par chalti hai (Brothers and sisters, we shouldn’t forget that our party runs on collective leadership),” Modi cautioned. As the crowd tried to chant “Modi, Modi,” he said: “Our party has reached this stage today with the traditions born out of the skills of Atal, Advani, Kushabhau, Bhandariji….”

“This means that if the BJP loses, then the collective leadership would be blamed and not Modi,” one BJP leader said, recalling how Modi and Shah had taken credit for all poll victories since 2014 but chose silence when the party lost in the three heartland states last month.

Comparing his leadership with farming, the Prime Minister said that despite good seeds and a good monsoon, a good harvest is not possible if the farmer doesn’t plough the fields on time. “When I say ‘mera booth sabse mazboot’ (my booth, the strongest), that means we have to till the land. Every member has to work,” he said.

Suggesting the 2019 battle would be tough, Modi declared that “nothing is impossible” and told party leaders they now had a strong foundation.

The political resolution said Modi had emerged as a “global leader” and achieved new standards of “inclusive development”. It projected the 2019 battle as “instability versus stability” and an “honest and courageous leader” versus a “leaderless opportunistic Opposition”.

Shah, who in his inaugural speech had projected the Prime Minister as “the world’s most popular leader”, rubbished Opposition unity and said Modi’s popularity would fetch the party over 50 per cent votes.

Finance minister Arun Jaitley said: “Not one of them (the Opposition parties) can stand in front of Narendra Modi as a leader.”

Early in his speech, Modi had asked people to choose between a “majboor” (helpless) and a “mazboot” (strong) government and projected himself as an ideal “sevak” (servant) who was “hardworking, honest and decisive”. Without naming Congress president Rahul Gandhi, he said the country has to decide if it wants a “sevak” who “goes on leave for 2-3 months without informing where he is going”.

More than once, Modi said he doesn’t claim to have solved all the problems of the country. “I am not saying all the problems are over. A lot remains to be done,” Modi said, promising to double farmers’ income by 2022.

What is this unity that the BJP speaks of?