Advertisement
Home / Opinion / What is this unity that the BJP speaks of?

What is this unity that the BJP speaks of?

The Kerala model of unity is one that India could aspire to, and it does not involve renaming roads or building expensive statues 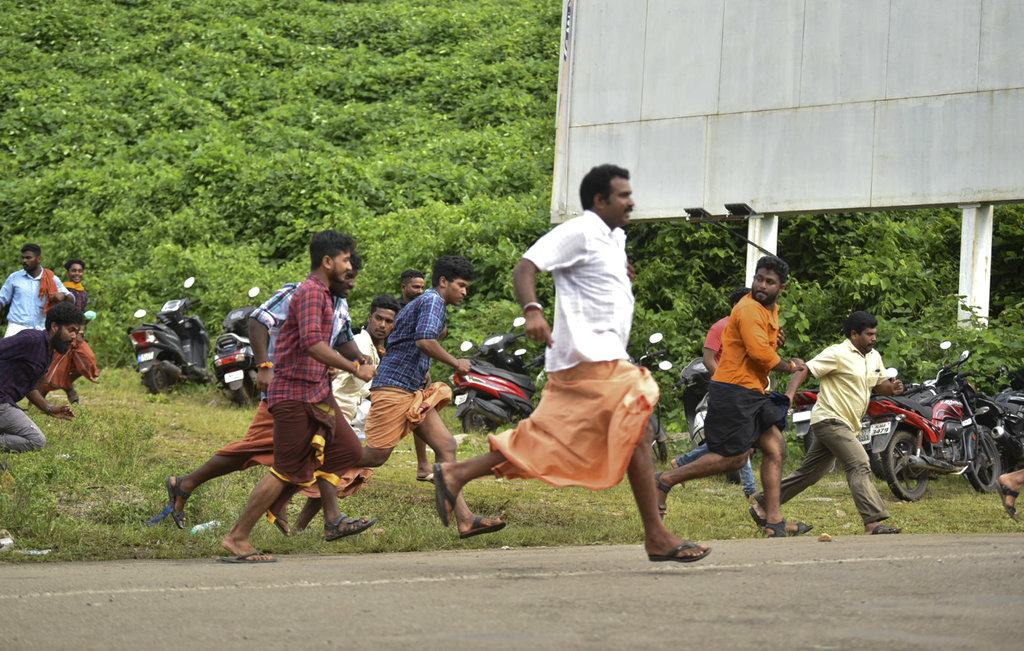 In this October 17 file photo, protesters run after being chased by police for trying to stop women of menstruating age from going to Sabarimala temple. Since the Supreme Court verdict on the issue, the Sangh Parivar has gone all out to instigate people by appealing to age-old prejudices
AP Photo
Subin Dennis   |   Published 01.11.18, 10:28 AM

At the same time, unfortunately, those whose idea of “development” seems to focus on building expensive statues and renaming cities and roads were trying to spread hate messages, urging people not do donate to the CMDRF. Some of the messages contained falsehoods about the fund, while yet others said Keralites ate beef and hence unworthy of help. A widely circulated message by BJP IT Cell member Suresh Kochattil said that the flood-affected people in Kerala are all “rich”. The BJP government at the Centre even blocked the government of UAE, a country with a large number of expatriate Keralites, from providing aid for the state’s reconstruction.

In the weeks since the Supreme Court verdict on 28 September allowing women’s entry in the Sabarimala temple, the attempts by the RSS-BJP to sow seeds of disunity have been renewed. The Sangh Parivar has gone all out to instigate people by appealing to age-old prejudices, unleashing naked violence on women devotees and journalists, plotting to pollute the temple by shedding blood, and threatening to burn the Indian constitution.

The Statue of Unity has been inaugurated even as deep disunity pervades Gujarat. The Muslims of Gujarat, the victims of one of the worst communal pogroms of independent India, have been at the margins for long. The state has also seen huge, divisive protests in recent years, driven by the system’s failure to generate adequate employment. In early October this year, about 80,000 migrant workers fled the state following violence against them, after the rape of a 14-month-old girl allegedly by a migrant worker. The statue project itself has led to protests by thousands of tribals who lost their land and who haven’t been rehabilitated.

The housing project which was inaugurated in Kerala on Wednesday is a relatively small part of a larger plan to ensure land and housing to all fisher folk in the state. Yet, as people’s reactions to the inauguration of the project showed, it holds immense significance, not just to its immediate beneficiaries, but also to the larger populace.

Prime Minister Narendra Modi unveiled the Rs 2,989-crore Statue of Unity – the world's tallest statue – on Wednesday in the Narmada district of Gujarat. On the same day, Kerala Chief Minister Pinarayi Vijayan inaugurated a new housing complex in Thiruvananthapuram for 192 fisher families who lost their homes due to coastal erosion or were under threat of losing their homes as they lived dangerously close to the sea.

The inauguration of the statue and the housing project on the same day were coincidental, of course. But it led to a lively conversation among social media users on the very divergent priorities of the political leaderships of the two states. In a certain sense, the difference in priorities may also arguably be a reflection of two contrasting visions of “unity” itself.

Kerala has had the most advanced human development indicators in India for decades. The top priority given by the governments, particularly those led by the Left, to improving education and health has played a major role in this.

The updated multidimensional poverty index (MPI) released by UNDP and the Oxford Poverty and Human Development Initiative (OPHI) in September once again showed where India’s states stood with regard to living standards, education and health. Kerala turns out to be the state ranked first, with the lowest multidimensional poverty. Gujarat is ranked 23rd among the list of states and Union Territories, with nearly 20 times the incidence of poverty compared to Kerala.

And Kerala has not been resting on its laurels. For instance, the state government has been investing substantial amounts to greatly improve facilities in public schools (government schools and government-aided schools). As a result, enrolment in public schools has increased by 6.3 per cent this year, while enrolment in private unaided schools has fallen. This has happened for the first time in 25 years.

The housing complex for families in the fishing community is a project in the same spirit. It is the first leg of a major rehabilitation project for families whose homes are under threat from coastal erosion as a result of rough seas. It is part of a rubric of policy-making which recognises that ensuring a life of dignity for everyone is the duty of society as a whole, and that the government has to play the leading role in realising this objective. It is in making this collective effort to not let anybody be left out, that the unity of the people is forged.

Such unity was remarkably visible during the recent floods in Kerala which resulted from the heaviest rains in the state in nearly a century. People in the state set aside all kinds of differences to mount rescue and relief efforts on a massive scale.

Young people from all walks of life volunteered for the rescue and relief mission in large numbers. Thousands of fishermen came from far off places, with more than 4,500 boats, to wade into the treacherous waters even at night to rescue stranded people. Temples, churches and mosques opened up their facilities for people from all communities to stay and to pray if needed. Trade unions, student organisations and youth organisations mobilised supporters for relief work. Millions of people around the world were involved in collecting and distributing relief material, and in mobilising funds for the Kerala Chief Minister’s Distress Relief Fund (CMDRF).

As mentioned earlier, the role of fisher folk in the rescue efforts during the floods was critical and widely appreciated. Many people at the time expressed regret that hitherto they had not been sufficiently considerate about the travails and concerns of the fisher community. The fisher folk are among the sections in the state whose living standards have been the poorest. The floods became an occasion when many people woke up to the recognition that much more needs to be done to improve their living conditions, although it was something that had to be done anyway as a matter of right.

In this context, it could be said that the housing project for 192 fisher families, as well as the warmth with which the people have welcomed it, is one way of Kerala beginning to say, “thank you”.

This is a model of unity that India could really aspire for.

The BJP is turning faith into a corrosive force

Subin Dennis is a Researcher at the New Delhi office of Tricontinental: Institute for Social Research. He can reached at subin@thetricontinental.org