The ruling, however, warns that in ensuring this right 'care and caution should be taken to ensure that it does not impinge upon the rights of others, or cause any harm, hindrance, harassment and nuisance to other individuals or members of the society' 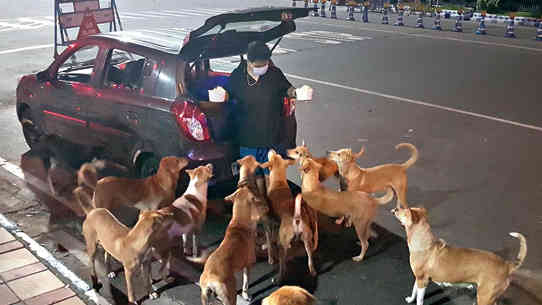 The ruling came in a longstanding dispute between a Delhi resident and animal lovers who had been feeding dogs in the colony near the entrance to the plaintiff’s home.
File picture
Paran Balakrishnan   |   New Delhi   |   Published 02.07.21, 10:04 AM

India’s street dogs have been given their own legal charter of rights and duties in a landmark judgment by the Delhi High Court that includes a right to be fed and an obligation to guard the colonies where they live.

“Animals have a right under law to be treated with compassion, respect, and dignity,” the court declared in its ruling that goes strongly in the favour of man’s best friend. “Animals are sentient creatures with an intrinsic value. Therefore, the protection of such beings is the moral responsibility of each and every citizen, including the governmental and non-government organizations,” the court went on to say.

The ruling came in a longstanding dispute between a Delhi resident and animal lovers who had been feeding dogs in the colony near the entrance to the plaintiff’s home. In February, the court ordered the two sides to work out a settlement. This resulted in a deadlock and Justice Pratibha M. Singh asked the Animal Welfare Board of India (AWBI) to step in as an arbitrator.

The judgment could have far-reaching implications for the millions of “community dogs,” as the ruling respectfully refers to strays, that live across India.

The court ruled unequivocally that: “Community animals (stray/street dogs) have the right to food and citizens have the right to feed community dogs.” The court warned, however, that in exercising this right “care and caution should be taken to ensure that it does not impinge upon the rights of others, or cause any harm, hindrance, harassment and nuisance to other individuals or members of the society.”

Although an amicable deal was eventually struck between the two sides establishing fixed feeding areas for the stray dogs, lawyers for the plaintiff and the defendant asked Justice J. R. Midha to set out rules for feeding stray dogs in communities. The issue of feeding strays in India sparks some of the bitterest rows in municipal colonies with some residents seeing them as a threat to safety and health.

Justice Midha laid down detailed rules on setting up feeding areas in all Delhi colonies. He also suggested that a pilot project in 10 residential areas should be conducted with the AWBI’s help. Under the scheme suggested by the court, each RWA will have to set up an Animal Welfare Committee.

The court’s ruling could have far-reaching consequences because it will involve establishing “feeding areas.” RWAs will also have to make provisions for sterilising animals and treating those that fall sick. “If any of the street/community dogs in injured or unwell, it shall be the duty of the RWA to secure treatment for such dog by the vets made available by the Municipal Corporation and/or privately from the funds of the RWA,” the court ruled.

Going beyond those areas, the court also pointed out that street dogs tend to be extremely territorial and attached to the areas where they live. It outlined a way by which, with the help of police, the dogs could be trained to act as guard dogs for the area. “Every RWA should form Guard and Dog partnerships and, in consultation with the Delhi Police Dog Squad, the dogs can be trained to make them effective as guard dogs and yet friendly to those who live in the colony,” the court proposed.

The court added: “The importance of street dogs in our community is of great significance. Being territorial animals, they live in certain areas and play the role of guards by protecting the community from the entry of outsiders.” The court said the aim of training the animals should be to “make the community dogs assets to the community instead of them being viewed as a menace.”

Back in 2014, the New Delhi Municipal Corporation floated a proposal to turn stray canines into security dogs and even had a plan to get them to attend a police training school. But the project never got off the ground.

Keeping in mind the fact that dogs are territorial animals, the court also ruled that feeding must take place in an area where residents are not inconvenienced but also within the dogs’ "territory".

“Every dog is a territorial being, and therefore, the street dogs have to be fed and tended to at places within their territory which are not frequented or less frequented, and sparingly used by the general public and residents.” The court ruled that the RWAs and the Animal Welfare Board of India should fix “suitable times” twice a day for feeding the dogs. In addition, the court proposed a dispute mechanism via the welfare board to settle differences between residents and RWAs and animal feeders.

To ensure peace between all parties, the court also laid down that, “It shall be the duty and responsibility of the Government officers, particularly the jurisdictional SHO, to ensure that peace and harmony are maintained amongst the residents, caregivers, and community dog feeders.”

India already has some of the most favourable laws globally for dogs. For instance, it’s illegal under the Indian Penal Code to kill healthy strays. Stray dogs are also protected by the Prevention of Cruelty to Animals Act.

In his ruling, the judge quoted Article 48A of the Constitution which lays down that the state must protect forests and wildlife. He also cited Article 51A(g) which enshrines respect for animals, saying people must have “compassion for living creatures”. He asserted that Article 21 offers the Right to Life and that this must also be extended to animals. “The said Article not only protects the life of human beings but also protects the life of animals,” he said.

“We have to show compassion towards all living creatures. Animals may be mute but we as a society have to speak on their behalf. No pain or agony should be caused to the animals,” the judge said. “Animals breathe like us and have emotions. The animals require food, water, shelter, normal behaviour, medical care, self-determination,” he declared.

In addition, Justice Midha noted that various countries like the UK, Austria, Germany have introduced new laws aimed at protecting and guarding the wellbeing of animals.

Animal welfare advocates hailed the judge’s judgment laying out rights for stray dogs as far-sighted and compassionate. But they cautioned that the ruling may be tough to put into practice. Says one expert: “Some RWAs can be obnoxious beyond belief toward people who want to feed strays. But there’s also an issue with some animal lovers who don’t want any rules or regulations.”