Selected for guests: Questioners and questions

MEPs back Delhi’s stand on terror 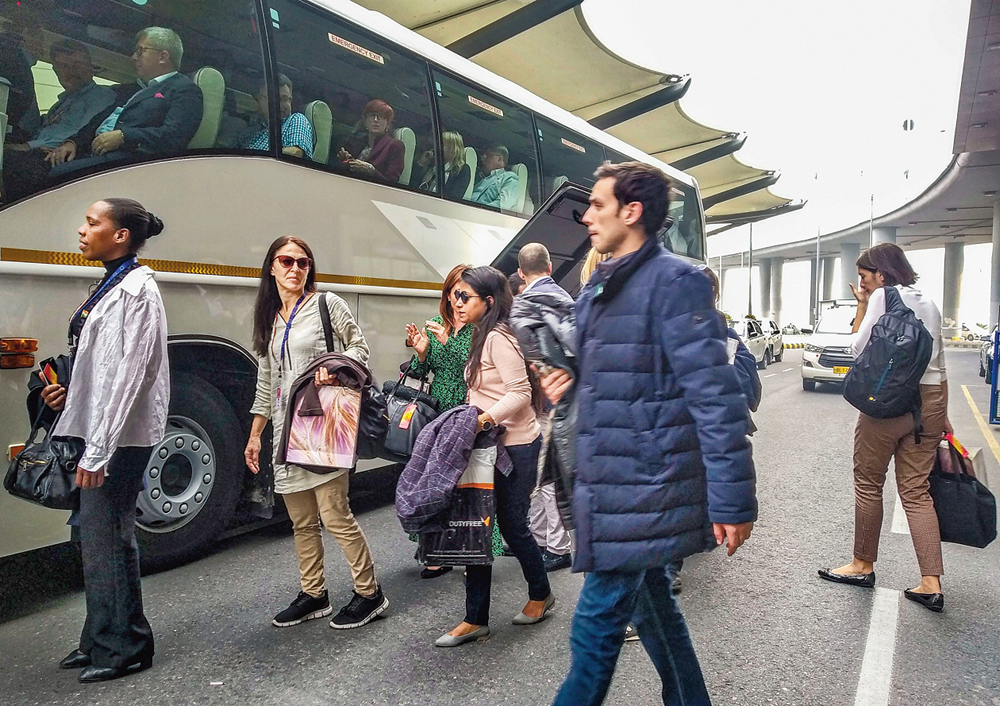 The members of the European Union Parliamentary delegation board a bus on arrival at Delhi airport on Wednesday after their visit to Jammu and Kashmir
(PTI photo)
Muzaffar Raina   |   Srinagar   |   Published 30.10.19, 08:27 PM

The group of Far-Right European lawmakers visiting Kashmir were not free to move around nor free to talk during their two-day tour that ended on Wednesday.

If the visitors got to meet a handful of mostly unknown people on Tuesday, they got to talk only to handpicked journalists on Wednesday.

Most major newspapers from the Valley and the rest of India were not invited to the media meet addressed by the MEPs on Wednesday. Several prominent television channels were excluded. Instead, local editors of little-known newspapers found a place.

The venue was an auditorium inside an army-run installation and the army, which played a key role in the visit, extended the invitations to the journalists.

“Some other journalists wanted to ask questions but they were not allowed,” he said. “There was no question about the scrapping of Article 370, the clampdown and communication blockade.”

Instead, questions were asked about rights violations in Pakistan and the Western media’s Kashmir coverage.

The additional director-general of police, law and order, Munir Khan, was present in the audience.

Four MEPs out of the 23-member group — Bill Newton Dunn from United Kingdom, Henri Maloose and Thierry Mariani from France and Ryszard Czarnecki from Poland — addressed the media and they did not disappoint the government.

They supported New Delhi’s abrogation of the special status under Article 370, describing it as an “internal matter”, and fully backed India’s fight against terrorism.

The delegation appealed to India and Pakistan to hold a dialogue, adding that they did not want Kashmir to become another Afghanistan.

The visit by the MEPs in their personal capacity is being seen as a public relations disaster for New Delhi. Most of the visitors are from Far-Right groups and were greeted with protests and shutdown in the Valley on Tuesday.

“Article 370 is an internal matter of India. What concerns us is terrorism which is a global menace and we should stand with India in fighting it,” Maloose told reporters.

He said they were not here to interfere in internal politics and fully support the country in its efforts for lasting peace and end of terror. “Terrorism remains the main concern of the delegation,” he said.

Another MP said that they “do not want Kashmir to become another Afghanistan” and urged India and Pakistan to “hold talks for resolving issues” between themselves.

“Terrorism in Kashmir is not only the matter of India but also for the international community. We do not want Kashmir to become another Afghanistan,” Mariani said. “In Kashmir, terrorism is severe and this is a global question.”

The MEPs condemned the killing of five labourers from Bengal in Kulgam district of south Kashmir on Tuesday evening.

They said they had significant meetings with representatives of civil society in Srinagar on Tuesday.

Mariani objected to the description of the MEPs as “fascist” in some media reports.

“It’s better that one should know about us properly before tarnishing our image…We just wanted to meet the common people. Coming to Kashmir was a pleasant experience,” he said.

The MEPs said the delegates would submit reports about Kashmir to particular groups and not to the European Union.