Advertisement
Home / India / Akhilesh Yadav exudes confidence, BJP goes all out to take him on

Akhilesh Yadav exudes confidence, BJP goes all out to take him on 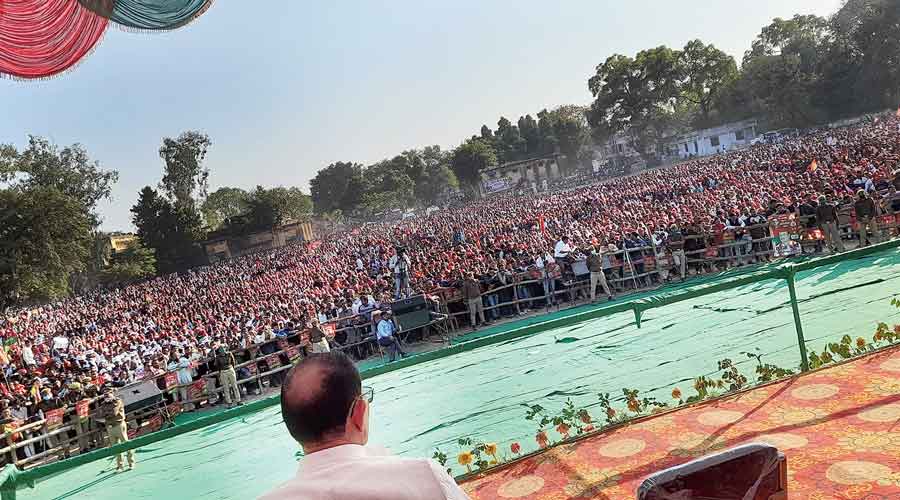 Uttar Pradesh will have to wait till March 10 to know who becomes the chief minister, but the voters in Karhal — among the 59 Assembly constituencies in the heartland state that went to the polls in the third phase on Sunday — are sure they know.

“It is a matter of pride for us that Akhilesh ji (Akhilesh Yadav) is contesting from our place. Karhal is going to get a chief minister to represent it... that’s great,” said Girendra Pal Baghel, 25, after casting his vote.

He was among 10 other young voters who had Akhilesh on their lips.

Akhilesh had chosen Karhal, which many observers believe is a safe seat, to contest his first-ever Assembly election. Karhal is in Mainpuri that his father Mulayam Singh Yadav represents in the Lok Sabha and also part of the Kannauj region known as the Yadav land.

Mulayam had studied and worked as a schoolteacher in Karhal before joining politics. It is also barely 15km from Saifai, Akhilesh’s ancestral village in Etawah district.

Kannauj in central Uttar Pradesh, which contains Etah and Etawah districts and has 25 Assembly seats, is a Samjawadi stronghold. Akhilesh’s uncle Shivapal Singh Yadav is contesting from Yashwantnagar in Kannauj.

The BJP had virtually knocked down this bastion in 2017 by winning 18 of the 25 seats. Shivpal, too, had lost from Yashwantnagar. It was a turbulent time for the Samajwadi Party. There was a split in the family with Shivpal breaking ranks with Akhilesh and going his separate way. Many SP leaders belonging to Other Backward Class defected to the BJP, which exploited the division in Akhilesh’s family and the party to the hilt.

A potato field in Kannauj region.
The Telegraph

In 2019, Akhilesh’s wife Dimple lost the Kannauj Lok Sabha seat to the BJP.

Akhilesh appeared to have taken hard lessons from the defeat.

Ahead of the Uttar Pradesh polls, he reached out to Shivpal and announced an alliance with his Pragatisheel Samajwadi Party (Lohia). He tied up with the Rastriya Lok Dal headed by Jayant Choudhary — grandson of the iconic farmer leader and former Prime Minister Choudhary Charan Singh — in western Uttar Pradesh.

In the run-up to the polls, several powerful OBC ministers in the Yogi Adityanath government such as Om Prakash Rajbhar, Swami Prasad Maurya and Dara Singh Chouhan deserted the BJP to join the SP.

Akhilesh stayed subdued till he got his act together. Now, he sounds supremely confident and attacks the BJP with ferocity and conviction.

“The bigger the leader in the BJP, the bigger lies he speaks. And the BJP’s biggest leader speaks the biggest lies,” Akhilesh told The Telegraph at an election rally at Hardoi on Saturday.

Asked to explain, he said: “It’s your duty to interpret. I won’t infringe upon your jurisdiction.”

He added: “We have already scored a century in the first two rounds of the polls in western UP. The BJP won’t be visible in the pile of the runs that we will sit on at the end of polling on March 7.”

Akhilesh took a plunge into the electoral battle from Karhal to instil a sense of optimism among his demoralised cadres after the defeats in 2017 and 2019, the way in which Bengal chief minister Mamata Banerjee contested from Nandigram to energise her cadres against Subhendu Adhikari’s rebellion.

“This phase is crucial in the sense that it has the seat (Karhal) from where I am also contesting. Get the BJP out at zero in this phase,” Akhilesh said to a boisterous crowd at the Hardoi rally that mainly comprised youths chanting “Akhilesh bhaiya” in a cacophonous chorus.

However, the BJP has left no stone unturned to defeat Akhilesh in Karhal.

The party has fielded Union minister Satyapal Singh Baghel and MP from Agra against the SP chief.

“We ask you for this lone Karhal seat. Defeating Akhilesh Yadav is the ultimate goal of the BJP. His defeat in Karhal will amount to the Samajwadi Party’s suprasaaf (decimation),” Shah told the crowd.

The micro-managers of the RSS have gone to great lengths to try to ensure Akhilesh’s defeat. “We have got panna in-charge (in-charge of separate pages of the voters' list). Our cadres have details of each and every voter. We are in the process of making Hindu Rastra... we are continuously removing the obstacles and working to establish it,” B.S. Rana, a senior RSS functionary looking after the BJP’s affairs in central Uttar Pradesh, told The Telegraph.

However, more than Ram Mandir and Hindus versus Muslims, issues such as unemployment, price rise and awaara pashu (stray cattle) dominate the discourse in the region.