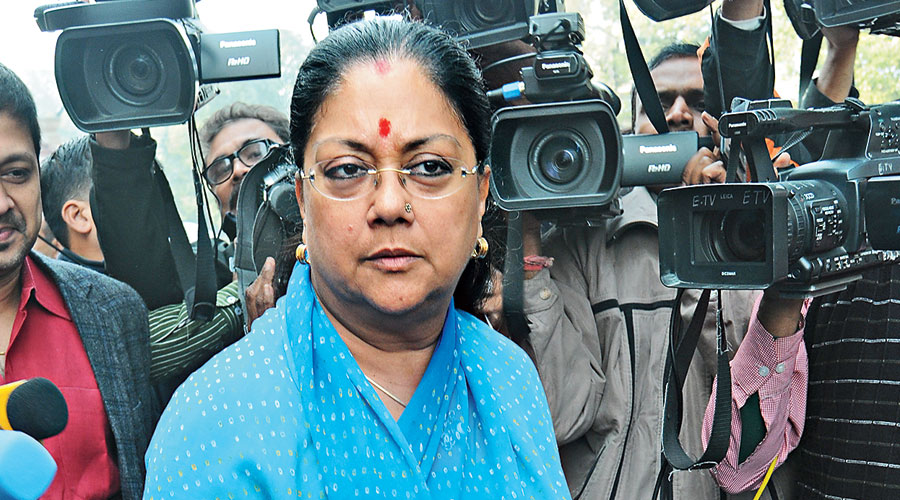 The intrigue over the silence of Vasundhara Raje Scindia, the tallest BJP leader in Rajasthan and a former chief minister, took an unseemly turn on Thursday with an ally of her own party making a mischievous, if not explosive, charge.

Hanuman Beniwal, a Rashtriya Loktantrik Party MP from Rajasthan, tweeted: “Former chief minister Vasundhara Raje has called up Congress MLAs close to her and asked them to support Ashok Gehlot. She has called each and every Jat MLA in Sikar and Nagaur and asked them to keep distance from Sachin Pilot and I have proof of this.”

Vasundhara had not reacted to Beniwal’s claims till late into the night.

Beniwal, who allied with the BJP in the 2019 Lok Sabha polls and was elected from Nagaur, is too marginal a leader to take on the former chief minister on his own. Several BJP leaders in New Delhi wondered whether he was aiding the central leadership’s effort to sideline Vasundhara.

Vasundhara has so far maintained silence over the ongoing political upheaval in Rajasthan, more or less confirming suspicions that it is an operation being handled from New Delhi.

Vasundhara has stayed away from the political storm in Jaipur, spending time at her Dholpur palace.

Beniwal’s accusation adds to the whispers on the BJP corridors that Vasundhara was opposed to the effort to bring down the Gehlot government with the help of Pilot, who nurses the desire to become chief minister.

Along with his failure to get the support of enough Congress MLAs, the presence of Vasundhara too has come in the way of Pilot’s smooth entry into the BJP, sources said. The Rajasthan BJP is dominated by Vasundhara.

However, other sources said the BJP central leadership would have set aside the opposition from Vasundhara had Pilot managed to prove his worth.

The central BJP is keen to oust the Congress from power in Rajasthan, as it did in Madhya Pradesh earlier this year.

Pilot had initially claimed he had the backing of around 30 MLAs but the figure later turned out not to be more than 19. The gap between the Congress and the BJP in the Rajasthan Assembly is of around 30 MLAs.

The other big obstacle in Pilot’s path appears to be the presence of a stalwart like Vasundhara and some other senior leaders who are unlikely to cede space to the Congress rebel. Vasundhara, a two-term chief minister who hails from Rajasthan’s royal family, is believed to command the loyalty of a large number of her party MLAs.

“The central leadership can overrule Vasundhara, but for that Sachin Pilot has to deliver,” a BJP leader said.

Vasundhara has, however, in the past proved a tough nut to crack even for the powerful current leadership of the BJP.

Amit Shah had as BJP chief failed to appoint a leader of his choice as state unit president ahead of the Assembly polls in 2018. Shah had wanted Gajendra Singh Shekhawat, an MP from Rajasthan, as state unit chief in what had been perceived as an effort to undercut Vasundhara, then chief minister.

Vasundhara didn’t allow Shah to prevail and the stalemate dragged on for two months. Madan Lal Saini was finally appointed the Rajasthan BJP chief. Although he was not a Vasundhara favourite, he was clearly not Shah’s choice, either.

Vasundhara’s silence this time shows that the current efforts to dislodge the Gehlot government are entirely an operation run by the Delhi leadership. Many in the BJP feel that the plan was also aimed at cornering Vasundhara, who was too feisty to be handled by even “Iron Man” Shah.

The Modi-Shah regime succeeded to an extent with a similar game plan in Madhya Pradesh. Shivraj Singh Chouhan, known for his opposition to Modi ahead of the 2014 general election, has managed to retain the chief minister’s chair but lost his say in the appointment of ministers and other key decisions.

The central leadership of the BJP has used Congress rebel Jyotiraditya Scindia to ensure the success of the plan. Jyotiraditya is Vasundhara’s nephew.

Unlike Jyotiraditya in Madhya Pradesh, Pilot is said to be single-mindedly focused on becoming the chief minister of Rajasthan. This makes matters a little complicated for the BJP. Party leaders, however, feel that at present the focus is on using Pilot to oust the Congress government in the state before a call is taken on how to accommodate him.