Advertisement
Home / India / Modi reaches out to Bangladesh with praise

Modi reaches out to Bangladesh with praise

Prime Minister Narendra Modi on Tuesday recalled Mujibur Rahman’s attempts at building a “positive and progressive society” after a war-ravaged Bangladesh got independence in 1971.

The content of the 12-minute video message, played at the formal inauguration of the Mujib Year celebrations marking the birth centenary of the neighbouring country’s Father of the Nation, bore hints that the Indian Prime Minister was trying his best to woo the ruling party and the people of Bangladesh using the emotion linked to its war of independence.

“We all know very well how a dictatorial regime ignored all democratic values and carried out injustice on the people… Bangabandhu brought the country out of that destruction and genocide and worked hard to build a positive and progressive society,” Modi said, recounting how Bangladesh was born after its nine-month Liberation War against Pakistan under the leadership of Mujib.

From the early days of freedom — when Bangladesh was categorised as a basket case because of its dependence on aid — the country has come a long way and has emerged as one of the fastest growing economies in South Asia.

Bangladesh’s political landscape, after its tryst with tyrannical army rules and fierce competitive politics between ruling Awami League and Bangladesh Nationalist Party, has become stable in the last few years.

But even 49 years after independence, the mention of Liberation War evokes a special emotion in the Muslim majority country of over 170 million. 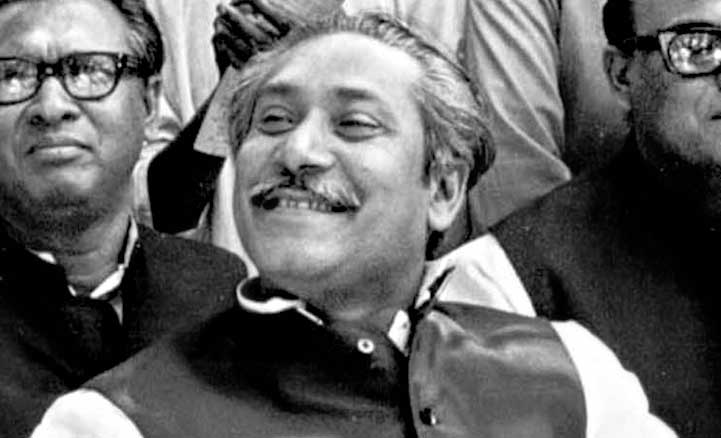 It was clear that Modi was trying to strike a chord with the people of the country as he recounted the injustice meted out to what used to be East Pakistan and how Rahman led a revolt to free the country and later his daughter Hasina took the mantle to ensure development of Bangladesh.

“The manner in which Bangladesh is progressing by adopting inclusive and development-oriented policies, it is praiseworthy,” the Indian Prime Minister’s recorded message hailed the country’s achievement and drew loud cheers in Bangladesh.

Modi’s message was the longest at the inaugural programme inside the Suhrawardy Udyan in Dhaka — he was scheduled to be physically present but could not because the organisers scaled it down due to coronavirus scare — where the celebrations started with the national anthem and fireworks.

Sources in Dhaka said the content of the address was “perfect” in view of the occasion as it was a fitting tribute to Mujib, who is remembered as the tallest leader in his country.

The other reason for calling it “perfect”, a source said, was the recent mood among a section of Bangladeshis, who have traditionally been India’s biggest brand ambassadors in the neighbouring country and fought the fundamentalist forces with the dream of emulating India’s “secular, liberal and democratic” culture.

This section has in recent months been on the back foot because of reports of communal strife from Delhi over the new citizenship matrix. The fact that the India’s ruling party leaders mentioned atrocities on non-Muslim minorities in Bangladesh to justify the Citizenship Amendment Act also pained the pro-India sections in the neighbouring country.

Against this backdrop, the content of Tuesday’s address seemed “please all” as Modi took care to explain how Bangladesh was reaching new heights and the world was watching it.

“Skill, education, health, women’s empowerment and on so many other counts, Bangladesh has made unthinkable progress,” said the Indian Prime Minister.

The endorsement on delivery of development from Modi on her government’s achievements would be music to Hasina’s ears as she has used the economic scorecard and the human development indices to swat away the opposition’s allegations over lack of democratic space in the country.

The Indian Prime Minister also used the occasion to iterate India’s willingness to engage more with Bangladesh, before describing the country as “India’s biggest trading and development partner in South Asia.”

“The next year will mark the 50th year of Bangladesh’s independence…. The year after, India will celebrate its 75th year of independence. These two milestones will reinforce the friendship of the two countries,” said Modi.

At the programme, Hasina addressed the nation besides reciting a poem describing the sorrow of a daughter who lost her father. Her younger sister Sheikh Rehana sung the theme song of Mujib Barsha and also shared her thoughts.

Recorded speeches by the other heads of state and government, including the Prime Ministers of Nepal and Bhutan, and general-secretaries of the UN and the OIC were also played out at the programme that television channels aired.