Supporters of the saffron party, along with Sangh Parivar karyakartas, chanted mantras and invoked Lord Jagannath, seeking his blessing for the daughter of Odisha, who is pitted against joint opposition candidate Yashwant Sinha 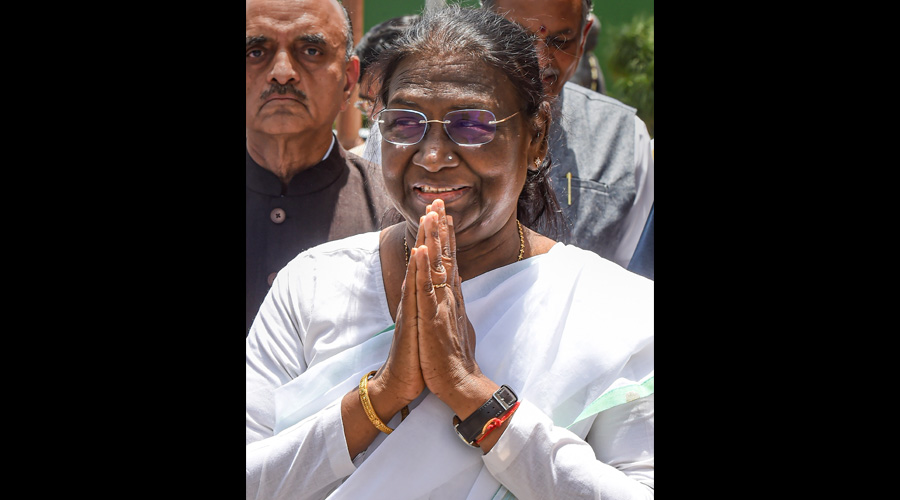 Earthen lamps were lit and yajnas organised at various places of worship across Odisha on Sunday as BJP workers and people from tribal communities prayed for the victory of NDA's presidential poll candidate Droupadi Murmu, a resident of the state's Mayurbhanj district.

Polling for the country's top constitutional post will be held on July 18.

Members of the Santhal community, to which Murmu belongs, paid obeisance to deities Marangburu, Aera and Jaherayo in Mayurbhanj.

Supporters of the saffron party, along with Sangh Parivar karyakartas, chanted mantras and invoked Lord Jagannath, seeking his blessing for the daughter of Odisha , who is pitted against joint opposition candidate and former Union minister Yashwant Sinha.

Babulu Murmu, the nayeke (priest) of Bada Putuka' jaher (place of worship) in Mayurbhanj, said, Scores of people offered prayers for the grand success of Murmu during the day.

Similar congregations were also witnessed at over 3,000 jaher in the district.

There was no festival as such. But the congregation of people at various places of worship in Mayurbhanj made it look like people were observing some local festival. Everyone is hopeful that Lord Marangburu will ensure the victory of Droupadi Murmu, Rameswar Tudu of Juluku Jaher said.

All district units of the BJP conducted rituals, praying for Murmu's win.

She (Murmu) has the blessings of Lord Jagannath. It is a proud moment for us as we witness a tribal woman getting elected as the first citizen, BJP's deputy leader in the Assembly, BC Sethi, said.

Officials in Jagatsinghpur and Bargarh said shlokas were recited at local temples by BJP workers.

Murmu, who is the first Odia in the fray for the presidential post, has secured the support of the ruling BJD, headed by Naveen Patnaik.

BJD Parliamentary Party leader in Lok Sabha Pinaki Mishra said, Murmu is the 'rakhi' sister of the chief minister; we will certainly vote for Odisha's daughter.