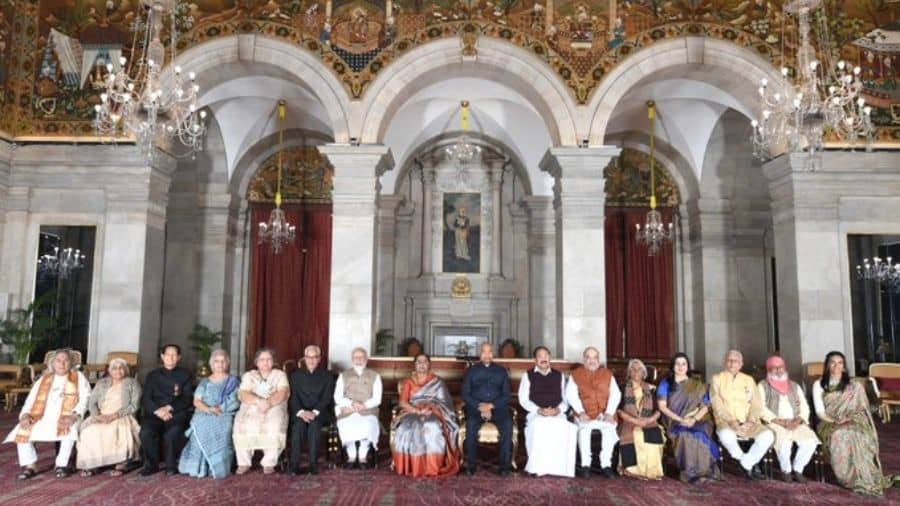 President Ram Nath Kovind presented Padma awards to 73 individuals, some posthumously, at a ceremony held in the Rashtrapati Bhavan here on Monday.

Of these, four were Padma Vibhushan, eight Padma Bhushan and 61 Padma Shri awards for the year 2020, according to a statement issued by the President's office.

The Padma awards are given in three categories -- Padma Vibhushan, Padma Bhushan and Padma Shri and announced annually on the eve of Republic Day.

"An outstanding parliamentarian and a distinguished lawyer, he made significant contributions in judicial reforms, electoral reforms and progressive social & economic legislations, the Rashtrapati Bhavan said in a tweet.

The award was received by Jaitley's wife.

"A visionary leader, deeply rooted in Indian traditions, Smt Swaraj embodied the empowerment of women and was a woman of many firsts," another tweet from the Rashtrapati Bhavan said.

The award was received by Swaraj's daughter.

The president also presented Padma Shri to captain of the Indian hockey team Rani and to Dr Raman Gangakhedkar, former head of the division of Epidemiology and Communicable Diseases, the Indian Council of Medical Research in New Delhi, among others.