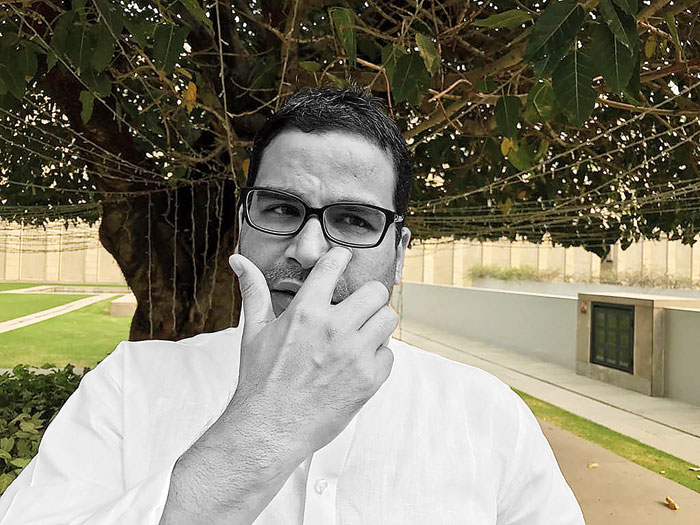 Part of the attention, and often envy, Kishor generates must come from the uniqueness of where he has arrived doing his jagged journeys these past years. He is probably the most cross-linked political polymer in play at the moment, bewilderingly so
Sankarshan Thakur
Sankarshan Thakur   |     |   Published 15.02.20, 11:47 PM

Politics is the art of the possible”, said

And then there are those who make it their business to attempt the art, or risk it.

We shall come to that presently. Ponder a little, meantime. A tip, if that helps: never underestimate the impulses of personal temperament and what they can make people do. You’d never have seen him with pen and paper but Prashant Kishor keeps notes, copious notes, and squirrels them like a moneylender squirrels IOUs.

Of the many reasons Kishor has been ridiculed for during his irrepressible zigzag as power strategist, three stand out, if only because they have proved the most popularly used of darts thrown at him.

Prashant Kishor is a gun for hire.

Prashant Kishor is ideology-averse and, therefore, a freelance carpetbagger.

He has walked a trail wantonly littered with ammunition for critics to pick up and pinion him. Few have dared — often taunted — with nonchalant promiscuity to the public glare as Kishor. The first polevault from Narendra Modi to the battlements of his then sharpest critic, Nitish Kumar. From Nitish Kumar to the Congress. From the Congress back to Nitish Kumar. And from a firm perch in Nitish Kumar’s precincts, the opening of multiple dalliances — with Jagan Mohan Reddy in Andhra Pradesh, with Uddhav Thackeray in Maharashtra, with M.K. Stalin in Tamil Nadu, with Arvind Kejriwal in Delhi and, most wholesomely, with Mamata Banerjee in West Bengal.

His career and course have given incontrovertible truth to the rattle of his critics — gun for hire, political polygamy, ideological permissiveness.

But try reading that as Kishor himself might on occasion read his critics.

So I am an acknowledged gun; and I keep getting hired.

I am polygamous. But nobody’s complaining among those that court me.

I am permissive. Ideology? It’s what I tear to ribbons and make splendoured frills of. And look at the political cast that has allowed me to seduce around myself. Four chief ministers and an aspiring one. A geographic expanse that comprises in excess of 160 Lok Sabha seats.

Part of the attention, and often envy, Kishor generates must come from the uniqueness of where he has arrived doing his jagged journeys these past years. He is probably the most cross-linked political polymer in play at the moment, bewilderingly so. Forget not the investments and linkages he would have made during his years with Modi. Discount not the connect he made, and most likely retains, with the Gandhi scions. Believe not that all is done and dusted between him and Nitish Kumar. Never say never in politics, and Kishor is a politician to the core, if ever there was one. The IOUs are to be squirrelled and only tacitly employed; they are not for display.

There are, in fact, clues to suggest that Kishor is uneasy merely playing backroom strategist and seeks to move front of the table as political entity of his own. Such a shift requires, first of all, overt political positioning on extant issues, and Kishor has just assumed one — outright and outspoken opposition to the CAA-NPR-NRC project, which has the whole nation in a roil. He hectored Nitish Kumar publicly on the issue as vice-president of the Janata Dal (United), and probably even forced his early ouster from his ranks. That had two immediate and very public consequences, both of Kishor’s wanting: he was seen as clearly opposed to the pet Modi-Shah scheme, and, he was politically free. To do what perhaps he himself may not be clear on yet. But here’s the other patently political thing Kishor is doing: defining a line from those that he has chosen to work with. He has tied himself to a line and is taking sides as a politician, no longer a strategist able to pass this way and that through the ideological swing door. He has allied himself to varying degrees of opposition to the Narendra Modi-Amit Shah ambition.

That said, where Kishor is at the moment is a nebulous, unformed space rather distant even from the suggestion of turning into a prospect. But the man’s record suggests he isn’t daunted by the absence of prospects, or playing with several at the same time.

When he arrived in Bihar in late 2014, frustrated and squeezed out of the Modi scheme, Nitish Kumar looked like a political basket case. He had been pounded by Modi at home. He had given up chief ministership, handed the job to Jitan Ram Manjhi, and turned a recluse. Kishor it was who pushed him to reclaiming the chief minister’s chair. Kishor it was who, after deep initial reluctance, brokered a deal with Lalu Prasad. Kishor it was who crafted the winner Mahagathbandhan.

When the Congress was drubbed in the Uttar Pradesh Assembly polls in 2017, Kishor was back to where he was in mid-2014 — suddenly without visible prospect. He slid under a deep and extended cloud of introspection and reassessment. He briefly flirted with the idea of shutting shop. Then, slowly, he began to open windows anew. He joined the JDU. But clearly, he wasn’t to be contained and kept as creature of the party. The impulses of temperament wouldn’t let him be.

He’s out of the JDU now. Where does Kishor go from here? What does he do with the contrary cast he daily juggles around? Can something be done with it at all? Is there a plan? Is there a string to be found that can be run through all and make something of significance out of what are only disparate pieces at the moment?

Well, for a start, in the Kishor scheme of things, there are pieces. They can be moved. They can be manipulated. Square pegs and round holes, they can be chiselled to fit. Like Nitish and Lalu were made to fit in 2015. Who’d ever have thought that could be done? Least of all the two men central to the Mahagathbandhan plot. But they were nudged into a consequential clasp, if only for a trice, if only to demonstrate that the unlikeliest things are possible.

Just like in Bihar in 2015, a common spectre haunts the disparate pieces that Kishor has accumulated on his board. The spectre of an expanding Modi-Shah hegemony. There might now also be the additional CAA-NPR-NRC glue to work with. You need a glue when you work with scattered geographies and disconnected, if not also contrary, political egos and ambitions. Besides, and more pertinently, what pieces there are to move do not add up to anything sizeable enough. This is where what’s theoretically possible begins to get stared at by what’s improbable. This is the corridor that’s Kishor’s office.

It’s probably about to re-open in Bihar. Why, though? For a start, birds home; and ousted birds home with a vengeance. Bihar is the stage Kishor has long wanted to play on with an enactment all his own, a prodigal’s payback, if you will. Bihar is also a good place to attempt a conjuring from almost nothing. There is very little to build on. But there lies the challenge of possibilities, and its perils and charms; those are key impulses of the Kishor temperament.

Bihar is good place to begin experimenting with the impossible and get a measure of what that would take.

Prashant Kishor thanks Delhi for protecting 'the soul of India'