Terming state as the' finest gem in the ring of country', Mann says strenuous efforts are being made to restore pristine glory of the state 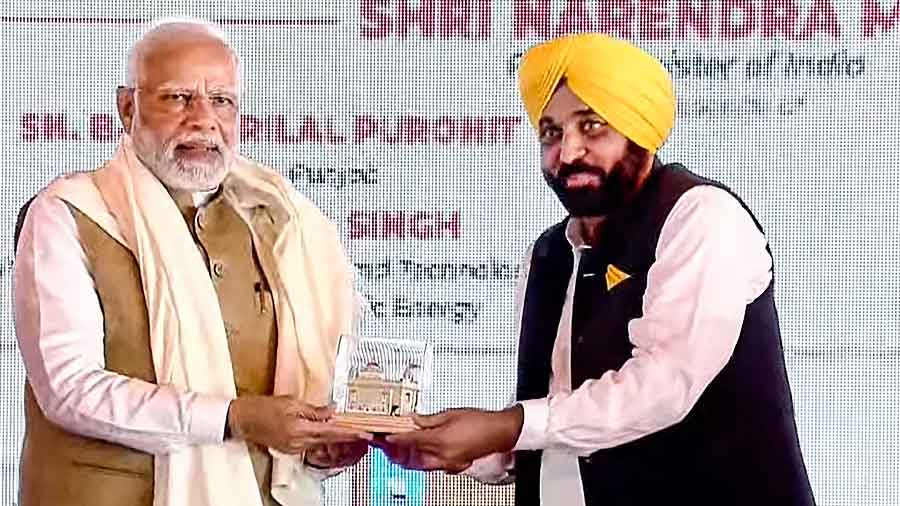 Punjab Chief Minister Bhagwant Mann on Wednesday extended a warm welcome to Prime Minister Narendra Modi here and described as "unfortunate" the January 5 incident when the PM had to return without attending an event in Ferozepur.

Modi on Wednesday inaugurated 300-bed Homi Bhabha Cancer Hospital and Research Centre at Mohali's Mullanpur on the outskirts of Chandigarh.

On January 5 this year, the prime minister's convoy was stranded on a flyover due to a blockade by protesters in Ferozepur. After that Modi returned without attending any event, including a rally. Later, the Supreme Court had even appointed a five-member committee to probe the alleged security breach.

Addressing the gathering on Wednesday, Mann described the cancer hospital as a big gift by PM Modi to the state.

Terming Punjab as the "finest gem in the ring of country", the chief minister said strenuous efforts are being made to restore the pristine glory of the state.

He said due to the failure of previous governments, some law and order issues were initially faced by the state government but now things are completely under control.

"Unfortunately, it is sad to say that when you came here on January 5, your programme had to be cancelled. But Punjab is welcoming you today. You are the country's prime minister and it is our responsibility to welcome you. Punjabis are known for their hospitality," said Mann during his address.

"I welcome you from the state government side. I expect you came to Punjab after a long time and you will announce some gifts for Punjab," he said.

The CM also felicitated the prime minister with a shawl and a replica of the Golden Temple.

When Mann started his speech, some BJP supporters raised slogans in favour of PM Modi. They again raised slogans when Mann was addressing the gathering.

Mann while referring to to the hospital said it will help the cancer-affected state, especially Malwa region, in combating the fatal disease effectively.

This is a historic initiative which will help the state in its crusade against cancer, he added.

"In common parlance, the Punjabis are even afraid of taking the name of cancer as its treatment is too costly. But this centre will go a long way in ensuring accessible and affordable cancer treatment to region" said the CM while thanking Modi for this project.

He asserted that though Punjab has played a key role in making the country self-reliant in food production but due to excessive use of pesticides and insecticides Punjabis have fallen prey to cancer disease.

He expressed satisfaction that 100-bed Homi Bhabha Cancer Hospital at Sangrur has been imparting quality cancer treatment to people. Around 37,000 patients have been successfully treated so far in this premier hospital, he said. Mann said the newly set up centre at Mullanpur will be a milestone in providing quality cancer treatment not only to patients from Punjab but to neighbouring states like Jammu and Kashmir, Himachal Pradesh, Haryana, Uttarakhand and Rajasthan.

Mann said when he was an MP, he used to refer three needy patients to big hospitals every month for treatment under the Prime Minister's Relief Fund.

He also said the state government has so far spent Rs 888 crore for the treatment of nearly 69,000 cancer patients under the Chief Minister's Relief Fund since 2013.

Similarly, ace sportspersons from Punjab like Milkha Singh, Dara Singh, Balbir Singh and others have also brought laurels to the country in the arena of sports, he added.

Mann said the Punjab Police with the support of central para military force is keeping strict vigil to foil the nefarious designs of forces inimical to peace, progress and prosperity of Punjab.

He also solicited fulsome support and cooperation from the Union government for effectively checking cross border smuggling of drugs and arms through drones.