It is going to be merged with the National War Memorial 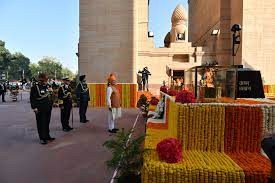 The Opposition strongly hit out at the Centre for its decision to “extinguish” the eternal flame of the Amar Jawan Jyoti as it is to be merged with the National War Memorial on Friday. Congress leader Rahul Gandhi slammed the move, saying “some people cannot understand patriotism”.

However, government sources said there was “a lot of misinformation” over the decision.

“It is a matter of great sadness that the immortal flame that used to burn for our brave soldiers will be extinguished today. Some people cannot understand patriotism and sacrifice – never mind… We will once again light the Amar Jawan Jyoti for our soldiers!” Rahul Gandhi tweeted Friday.

Congress MP Shashi Tharoor also took to Twitter and said, “This government has no respect for democratic tradition & established convention, whether in parliament or out of it. The sanctity acquired after fifty years of the Amar Jawan Jyoti is being lightly snuffed out… So everything must be reinvented post-2014?!”

Leader of Opposition Mallikarjun Kharge and Congress leader Manish Tewari also slammed the BJP government. “The RSS in principle doesn’t consider martyrdom as ideal but a fatal flaw. Here, excerpts from Golwalkar’s “Bunch of Thoughts”, which has now been taken down from their website. This explains why the Modi Govt is extinguishing Amar Jawan Jyoti today, after half a century,” tweeted Kharge.

Government sources, meanwhile, said it was “ironic that people who did not make a National War Memorial for seven decades” were now “making a hue and cry when a permanent and fitting tribute is being made to our martyrs”.

“The flame of the Amar Jawan Jyoti is not being extinguished. It is being merged with the flame at the National War Memorial. It was an odd thing to see that the flame at Amar Jawan Jyoti paid homage to the martyrs of the 1971 & other wars but none of their names are present there,” government sources said.

“The names inscribed on the India Gate are of only some martyrs who fought for the British in the World War 1 & the Anglo Afghan War & thus is a symbol of our colonial past. The names of all Indian martyrs from all the wars, including 1971 and wars before and after it, are housed at the National War Memorial. Hence, it is a true shraddhanjali to have the flame paying tribute to martyrs there,” they added.

The National War Memorial, where the flame will be merged, spans over 40 acres. It was built in 2019 at a cost of ₹ 176 crore and inaugurated by Prime Minister Narendra Modi.

At the War Memorial, the flame is positioned below the central obelisk. There are four concentric circles - the "Amar Chakra", "Veerta Chakra", "Tyag Chakra" and the "Rakshak Chakra", where the names of 25,942 soldiers are inscribed on granite tablets in golden letters.

The memorial also includes six bronze murals depicting the famous battles fought by the Indian Army, Air Force and the Navy in a covered gallery in the Veerta Chakra.