Opposition parties focus on EVM instead of exit polls 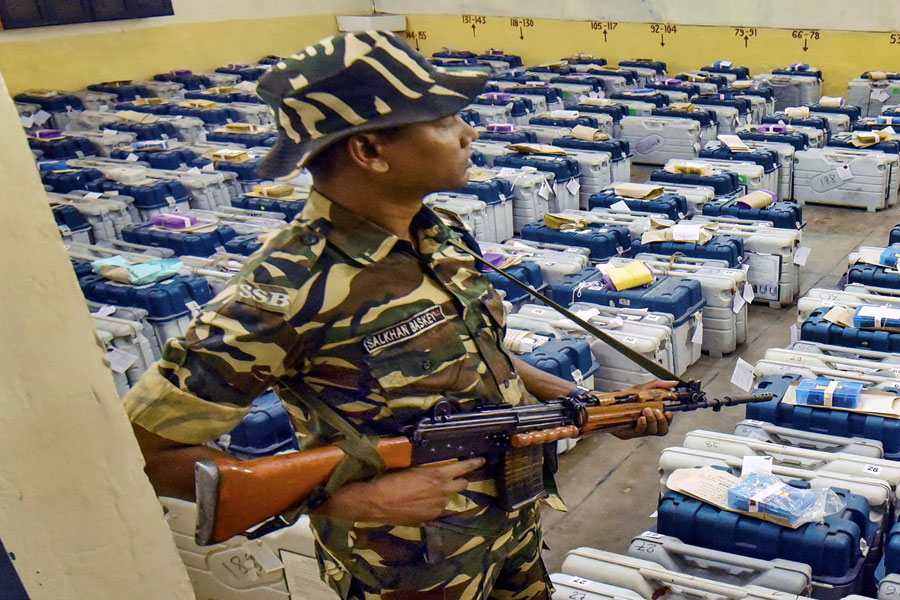 The Opposition wants counting not to start for any subsequent round till the figures of the previous round have been tabulated, signed and accepted. It wants the number of votes recorded in the EVMs to be checked against the voter numbers in the booth sheets.
(PTI)
Sanjay K. Jha   |   New Delhi   |   Published 20.05.19, 10:02 PM

The Opposition parties have decided to focus on the integrity and safety of the electronic voting machines and on paper-slip matching instead of getting bogged down in questioning the exit polls.

They will on Tuesday petition the Election Commission for clarity on how to deal with any mismatches between the voting-machine recordings and the paper audit trail, apart from seeking additional EVM security and the checking of the machines.

Sources said the Opposition might approach the Supreme Court if the poll panel provides no clear-cut guidelines on these subjects before counting starts on May 23.

The Opposition also plans to lodge a formal complaint with the commission citing reports about alleged attempts to enter strong rooms and replace the voting machines in parts of the country.

Suspicions were raised about the integrity of the EVM recordings at a meeting of the Congress core group and at Telugu Desam chief N. Chandrababu Naidu’s talks with fellow Opposition leaders.

“There are many problems with the counting process. The EC should take steps to resolve all those problems,” Naidu said on Monday.

The Opposition wants counting not to start for any subsequent round till the figures of the previous round have been tabulated, signed and accepted. It wants the number of votes recorded in the EVMs to be checked against the voter numbers in the booth sheets.

A source listed the other demands: “Every single voting machine should be inspected to ensure the seals are intact. Clear instructions regarding the party representatives on counting day should be circulated to all the officials and parties so that there’s no confusion over their presence and unscrupulous officials can’t prevent them from ensuring the process is transparent and free from interference.”

NCP leader Sharad Pawar dismissed the exit polls as “nautanki” (drama). “Don’t think nautanki happens only outside; it happens in politics too,” he said in Mumbai. “An attempt has been made to create a different kind of atmosphere in the country. People are worried. But wait till May 23; the truth will come out.”

Some Opposition politicians flagged the anomalies in some of the exit polls. For instance, one exit poll has predicted seven Bihar seats for Ram Vilas Paswan’s Lok Janshakti Party, which has contested only six. Some others said the projections would go wrong in at least a dozen states.

Congress leaders and allies from Maharashtra, Bihar, Jharkhand, Madhya Pradesh, Rajasthan, Chhattisgarh and Delhi insisted that the ground realities were at odds with the pollsters’ forecasts.

Madhya Pradesh chief minister Kamal Nath cited how the exit polls had got it wrong several times, including the 2004 general election and last December’s Assembly polls.

“All the polls said the Congress was losing. Wait for May 23; the truth will come out,” he said.

Rajasthan chief minister Ashok Gehlot said in Jaipur: “What happened in 2004? The exit polls have mostly gone wrong. I have spoken to all my 25 candidates (in Rajasthan); nobody is confused by the exit polls. They are all confident.”

In 2004, every exit poll had predicted a return to power by the NDA but it was the Congress-led UPA that formed the government.

“We don’t trust these figures. Exit polls are entertainment. On May 23, the real results will come out and everything will be clear,” Congress spokesperson Anand Sharma said.

“We have gone out and met people. Prime Minister Narendra Modi has done vishwasghat (betrayal). We will be confounded if he wins even after all this, and the fairness of the polls will come under question.”