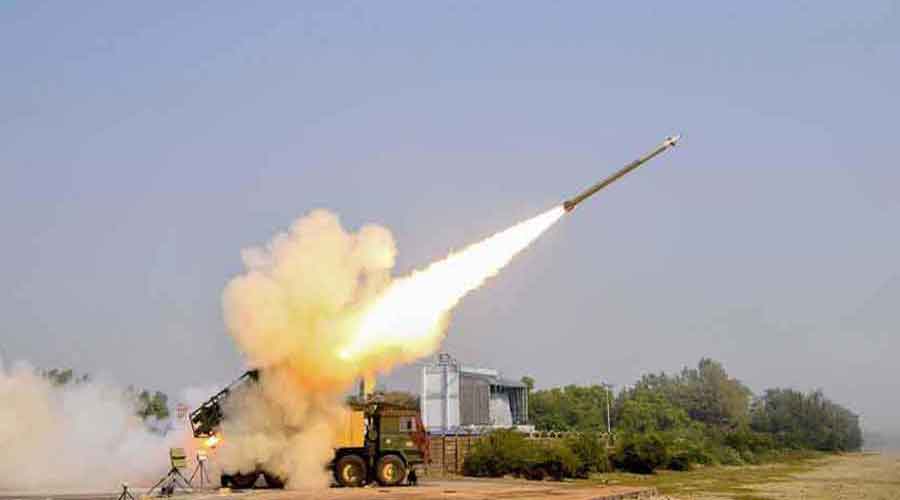 Defence ministry sources said it could have been a BrahMos supersonic cruise missile without a warhead.
File photo
Imran Ahmed Siddiqui   |   Published 17.03.22, 04:15 AM

Former navy chief and 1971 war hero Admiral Arun Prakash and Air Vice-Marshal Kapil Kak (retired) spoke to The Telegraph on the “accidental” firing of a missile by India into Pakistan.

Q: How can a missile be accidentally fired?

Admiral Prakash: It sounds very strange. Missiles, even most basic weapons, have at least two-three safety systems built in them. This (missile) is a strategic weapon system. So I doubt it’s possible to fire it by accident. Obviously it’s a human error or a technological issue. It is even more disturbing if there was some problem in the design. If it’s not a design issue then it’s a human error, which means procedures are not well laid down.

Q: Was it a failure of the command system?

Secondly, when the Prime Minister, or whoever the head of the state, orders that it should be fired, then it must always go…. This is the basis of all command-and-control structures worldwide. So that rule has obviously been violated because it has gone off without due authorisation, mistake or accident — whatever you call it. That’s not a good sign for a command-and-control system.

And if there is technological malfunction, then it’s more disturbing as it means there is some problem with the design. Another issue is that when an incoming missile is seen or detected, then the target country has full option to shoot it down, even retaliate. When you see a missile coming towards you, the first thought is whether it has a nuclear warhead, so either that country can shoot it down or retaliate. It’s great good fortune that nothing of that sort happened. It’s good fortune that Pakistan did not react but it could have happened.

Finally, this was a cruise missile, it could have happened with the ballistic missile also and in that case the consequence could have been far more serious. As a responsible nuclear weapon state, it’s our commitment to ensure we observe international standards of safety and security.

Q: The Indian government has not been forthcoming and so far has not revealed what exactly happened.

Admiral Prakash: I don’t think you can go public with issues like this. The government is probably right. More important thing is that we should reassure our neighbours that everything is properly functioning. Pakistan and China need to be reassured.  Later, the public should also be reassured that look, we have seen everything, and whatever went wrong, that will not happen again. Most probably it’s a human error or technical error. The drill was not followed or the drill that was followed is not adequate.

Q: What are the steps up to the firing of a missile?

Air Vice-Marshal Kak: A missile has a launch platform. The missile should be mounted on the launch platform and all the electrical circuitry has to be energised. All the mechanical locks need to be unlocked and ensure that all the propellants are there, as without these the missile cannot take off. Electronic circuitry takes place and once you press the button the missile goes off.

Q: What does this say of the command-and-control system?

Air Vice-Marshal Kak: I feel that it (‘accidental’ missile firing) should not have happened as it speaks a lot about the command-and-control system. This is a serious breach of launch discipline and protocol. Defence minister Rajnath Singh has said an inquiry will examine in detail how it happened and new procedures should be put in place.

Q: How do you see the government’s response?

Air Vice-Marshal Kak: The Indian government’s communication strategy on this has been below par. It is because of political control as it is overly centralised. The accident happened around 7pm on March 9 and I think we realised soon enough that we had goofed up our missile.

This would have assuaged the concerns internationally on the India-Pakistan equation. This would have pre-empted Pakistan from making a statement that Indian nuclear missiles have problems of command and control. How can a missile be fired like this?

All this could have been prevented. Within 15-20 minutes the statement from India should have come out. In a conflict situation it could prove critical. The other side could feel that a nuclear missile has been launched. This shows there is a high level of maturity in Pakistan that they did not react in a very irresponsible and hurried manner.

(The Indian defence ministry statement was issued 48 hours after Pakistan drew attention to the missile.)

Q: Is it possible for a missile to be fired accidentally.