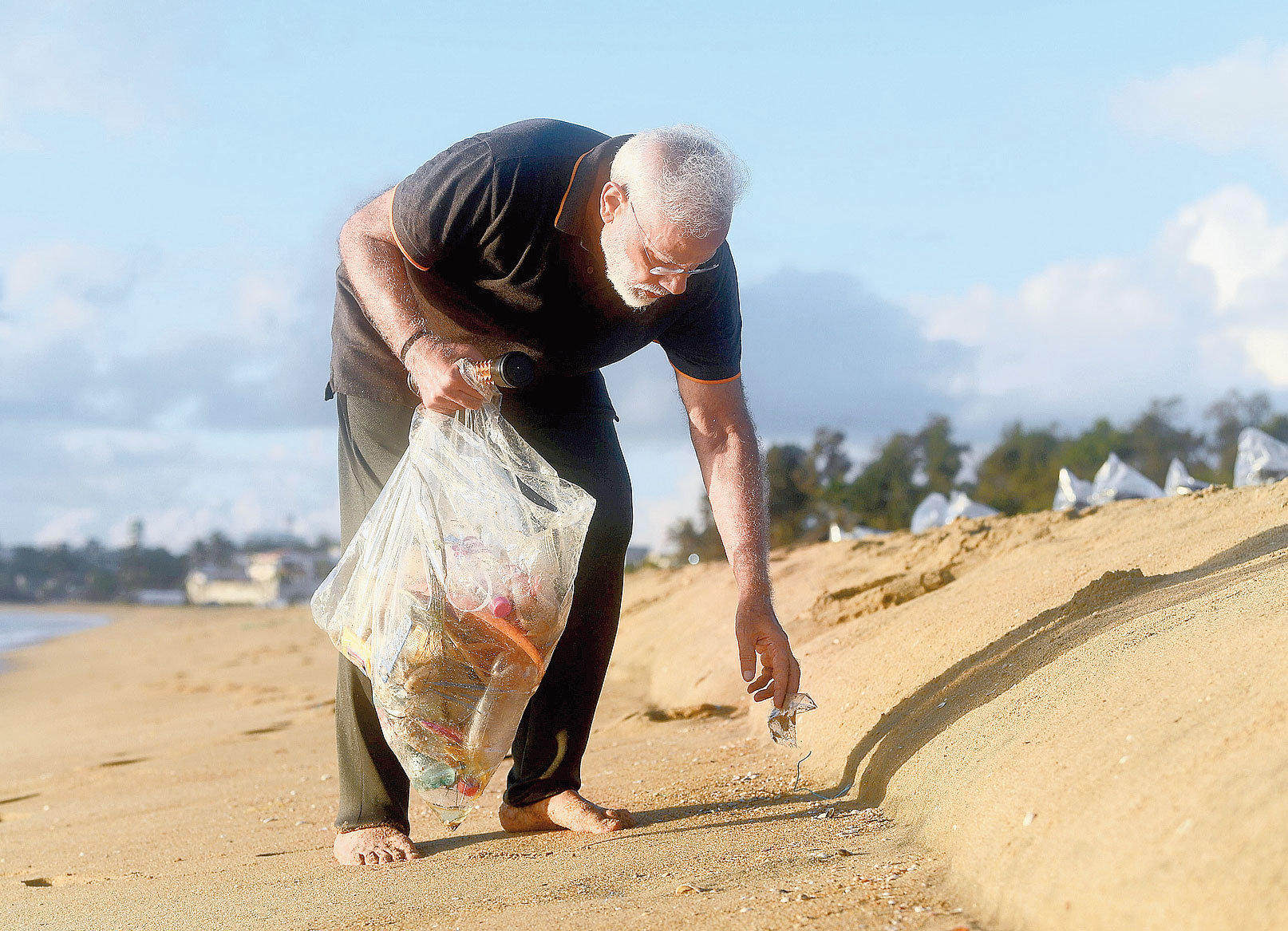 Prime Minister Narendra Modi used images from his two-day informal summit with Chinese President Xi Jinping to reach out to the domestic audience, in Tamil Nadu and the rest of the country.

A professionally shot three-minute video clip showed Modi plogging on the beach a day after he had turned out in veshti, half-sleeve white shirt and angavastram to welcome Xi.

The plogging was aimed at underlining his cleanliness drive while the traditional attire was seen as political outreach to the people of Tamil Nadu, a state where the BJP has not been able to get a foothold.

“Tamil Nadu says #DontGoBackModi,” tweeted BJP’s IT cell chief Amit Malviya with three pictures of Modi in the traditional Tamil attire, after the hashtag started trending on Twitter on Saturday.

“Indian needs you…#DontGoBackModi,” another tweet from Malviya said, this time attaching two videos — one of Rahul Gandhi throwing a plastic water bottle towards a supporter during a road show and the other of Modi picking plastic bottles on the Mahabalipuram beach.

The hashtag #GoBackModi had trended on Friday and, before that, during Modi’s recent visit to Chennai for the convocation at IIT Madras.

The BJP had faced a backlash in Tamil Nadu after home minister Amit Shah’s statement that Hindi should be the common language of the country. Coming on the back of the draft new education policy suggesting Hindi as an additional language in non-Hindi speaking states, this was seen as an effort by the Centre to impose Hindi.

Modi’s attire was seen as an attempt at damage control. Earlier, he had quoted ancient Tamil poet Kaniyan Pungundranar in his address at the United Nations last month and praised Tamil cuisine when he spoke at IIT Madras.

“A special Thank You to my sisters and brothers of Tamil Nadu. As always, their warmth and hospitality was outstanding. It’s always a delight to be among the people of this dynamic state. I also thank the Government of TN for their efforts in organising the Summit in Mamallapuram,” Modi tweeted on Saturday. He also posted tweets in Tamil.

After the outreach towards the people of Tamil Nadu, Modi on Saturday took to plogging to connect with people across the country.

“Plogging at a beach in Mamallapuram this morning. It lasted for over 30 minutes. Also handed over my ‘collection’ to Jeyaraj, who is a part of the hotel staff. Let us ensure our public places are clean and tidy! Let us also ensure we remain fit and healthy,” the Prime Minister tweeted.

The video was lapped up by ministers and BJP leaders. “A true leader leads by example. We are grateful to PM @narendramodi ji for his untiring efforts towards cleanliness. Let us further his resolve for a Swachh and Samruddha Bharat,” Amit Shah tweeted.

Road transport and highways minister Nitin Gadkari shared the video and said Modi was an “inspiration” for everyone and was trying to fulfil the dream of Mahatma Gandhi. “It’s matter of pride for us,” he said.

Railways and commerce minister Piyush Goyal tweeted: “An Inspiring Sight: Following the words of Mahatma Gandhi ji, ‘You must be the change you wish to see in the world’, PM @NarendraModi ji takes it upon himself to clean the Mamallapuram beach in Tamil Nadu, inspiring crores of people to contribute to the Swachh Bharat Abhiyan.”