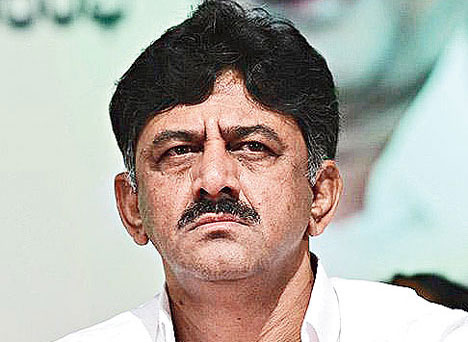 A Karnataka minister on Wednesday accused the BJP of misusing central agencies to harass him and cast aspersions on the Congress leadership with the larger aim of pulling down the coalition government in the state.

D.K. Shivakumar, a powerful Congress leader, said he was not involved in hawala transactions and was ready to face “any type of torture” by central agencies.

His response came after BJP spokesperson Sambit Patra said in New Delhi that the Congress leadership respond to purported “confessional statements” that showed black money was supplied to the Congress headquarters.

Patra said that in his confessional statement before the income tax department, an employee at Karnataka Bhavan in Delhi had said that he used to carry loads of cash sent by Shivakumar and deposit it to the accounts department of the AICC.

Patra claimed he had received the confessional statements from the media and not the government or the income tax department. The BJP leader said he would distribute copies of the statements among journalists but did not do so.

Patra also referred to diaries allegedly recovered from Congress leaders in Karnataka, claiming “entries of money running up to Rs 600 crore were shown against SG and RG among others”.

Patra alleged the acronyms referred to top leaders in the Opposition party and demanded that Congress president Rahul Gandhi and his predecessor Sonia Gandhi come out and respond.

But Shivakumar said: “He is simply using RG names, SG names. Where is RG name and SG name? I want to make it very clear that no SG or RG names are there. They are unnecessarily trying to damage the name of our leaders. Let them (the Enforcement Directorate) call me.”

Shivakumar said he was being harassed by central agencies ever since he hosted Gujarat Congress MLAs during the Rajya Sabha elections there to prevent poaching.

“The IT officials found Rs 41 lakh in cash from my home, for which I have shown the source,” said Shivakumar.

Shivakumar said he owned a lot of agriculture land and other businesses for which taxes had already been paid. “My family pays Rs 30 crore to the income tax department,” he said.

“They (the Centre) got the IT officials to raid 82 premises of mine, my family and my friends when I was engaged in my party duty to protect our MLAs from Gujarat,” he said.

Shivakumar said the BJP was levelling the accusations with the larger aim of breaking the Congress-Janata Dal Secular government. “They are daydreaming of coming to power by pulling our government down. It will not happen,” he said.