Three associates of the minister's son, wwere taken to the crime scene were Shekhar Bharati, Ankit Das and Mohammad Latif 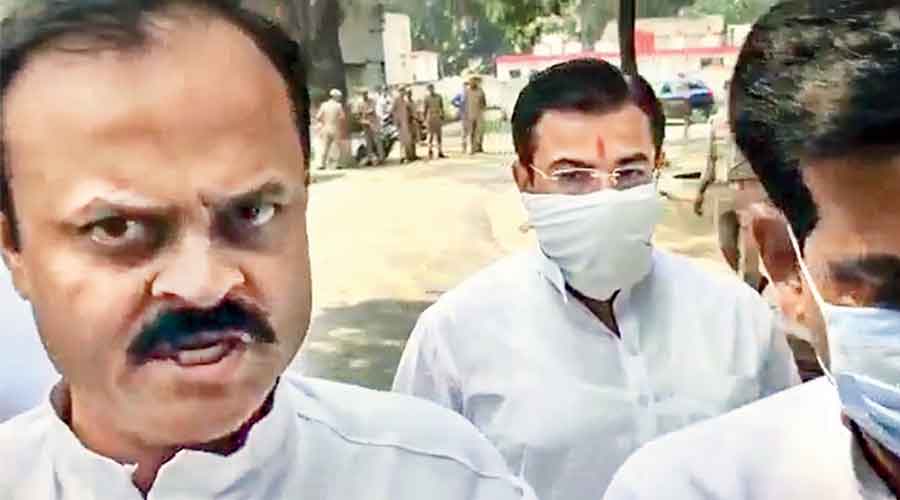 The Uttar Pradesh police special task force on Thursday took Ashis “Monu” Mishra, the son of Union minister Ajay Mishra Teni, and his three associates to Tikunia village in Lakhimpur Kheri district to recreate the scene of the massacre of farmers on October 3.

According to eyewitnesses, Ashis was in a Mahindra Thar jeep belonging to his father when it mowed down the farmers. The Thar was leading the convoy that crushed to death four farmers and one journalist, hitting them from behind and ploughing through them as they were walking back after a protest. Ashis denies he was at the spot.

Ashis’s three associates who were taken to the crime scene were Shekhar Bharati, Ankit Das and Mohammad Latif. Ankit, an aide of Ashis, Ankit’s driver Shekhar and personal security guard Latif were allegedly in a Toyota Fortuner that was tailing the Thar.

A farmer who was present at Tikunia when the SIT reached with Ashis and the other accused on Thursday told The Telegraph: “The SIT had brought three effigies made of straw and covered in black cloth to denote some of the farmers whom the Thar allegedly crushed under its wheels. A police jeep was used to denote the Thar while two SUVs were used to represent the Fortuner and a Scorpio.”

A policeman was quoted as telling a journalist after the SIT left the spot: “The recreation of the crime scene was conducted from noon to 4pm. Upendra Agrawal, the DIG of the SIT, led a team of over a dozen officers.”

“What was interesting was the presence of five lawyers representing Monu along with the SIT. It was difficult to figure out who were SIT members and who were lawyers,” the officer added.

The court while granting the SIT custody of Ashis had said his lawyers could be present only at a distance.

DIG Agrawal refused comment when journalists asked why Ashis’s lawyers continued to be among the SIT officers when the crime scene was being reconstructed at the Tikunia curve.

Awadesh Singh, a counsel for Ashis who was present at the spot during the crime scene reconstruction, said the exercise was conducted to “find out the truth”.

“We were there and found that the SIT was doing its job honestly,” Singh said.

The police officer said a forensic team measured the distance between the point where the Thar mowed down the farmers and where it stopped before its occupants tried to flee.

From there the SIT took the four accused to a petrol pump half a kilometre away in the direction of Banvirpur, Teni’s village. The forensics team measured the distance with the help of a tape. There have been reports that the Scorpio had refuelled at the pump after the farmers were run over.

“Then the SIT took all four to the wrestling ground at Banvirpur and asked each of them about details of the tournament they claim they were attending at the time the vehicles crushed the farmers,” a local journalist said.

The farmers had gathered at Tikunia to protest threats issued by Teni, the Union minister of state for home, to those opposing the Narendra Modi government’s controversial farm laws. Teni had from a public stage warned the farmers that he would fix them in two minutes.