The announcement was made by Achyuta Samanta, founder, KIIT and KISS, while felicitating the two Olympians on Monday 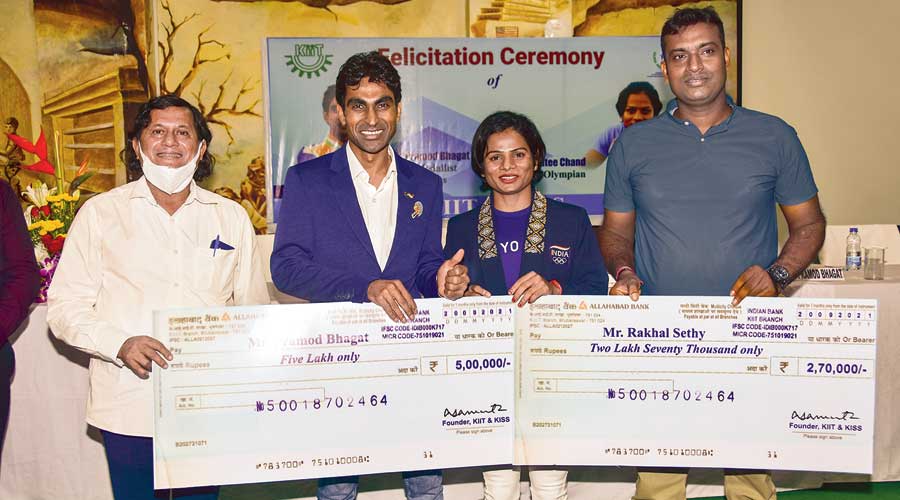 The Kalinga Institute of Industrial Technology (KIIT) has decided to name two of its stadiums after Pramod Bhagat, the para-shuttler who won the first gold medal for India in the Tokyo Paralympics, and Olympian sprinter Dutee Chand.

The announcement was made by Achyuta Samanta, founder, KIIT and KISS (Kalinga Institute of Social Sciences), while felicitating the two Olympians on Monday. Two stadiums of the KIIT will be named after these two Olympians in December 2021, said Samanta. With this, the KIIT has become the first university in India to name stadiums after Olympians.

In recognition of Bhagat’s achievements, Samanta felicitated him and honoured him with a cash prize of Rs 5 lakh.

The indoor stadium at Campus-12 (where Bhagat practised his game) will be named as “Pramod Bhagat Indoor Stadium”. Besides, Bhagat will be honoured with an honorary doctor of letters (DLitt) degree from the KIIT or KISS Deemed to be University, the KIIT said in a media release.

Dutee, a student of KIIT School of Law, has been on the Olympic tracks for two successive terms, including the recently concluded Tokyo Olympics. She has also bagged two silver medals in the Asiad, and become the first woman in the country to win the gold medal in the World University Games representing this university.

In appreciation of her contribution to Indian sports, KIIT has decided to name its Synthetic Athletic Stadium as “Dutee Chand Stadium”. Dutee’s name is also considered for an honorary doctor of letters (DLitt) from KIIT or KISS next year.

Another para-athlete, world champion Rakhal Sethy was presented a cheque of Rs 2.7 lakh for a wheelchair to participate in the Fencing Para World Cup in November.