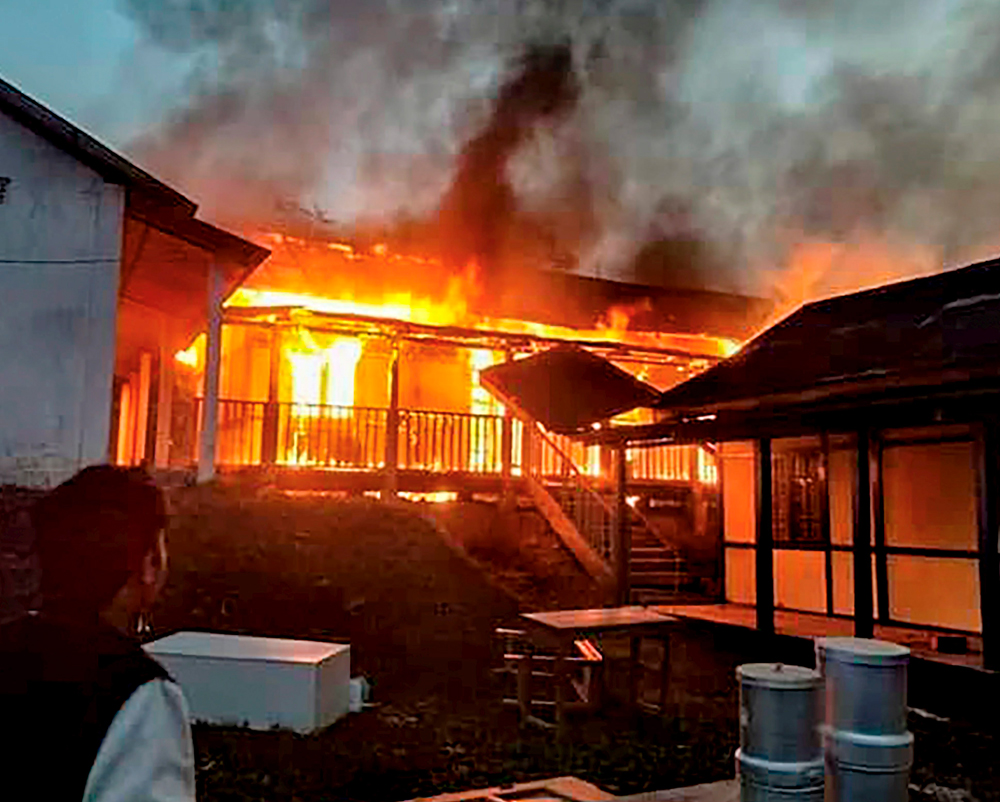 A building set on fire in Arunachal Pradesh's capital Itanagar after a mob went on a rampage during a protest against the move to grant permanent resident certificates to six communities living in the state, on Sunday.
(PTI)
Muzaffar Raina   |   Srinagar   |   Published 25.02.19, 10:13 PM

The uncertainty shrouding Article 35-A has blurred the lines between pro-India voices and separatists in Kashmir with some leaders raising the spectre of a situation uglier than that in Arunachal Pradesh if the provision guaranteeing special rights is scrapped.

Article 35-A allows only permanent residents to purchase immovable property in Jammu and Kashmir.

BJP-ruled Arunachal is now in turmoil after suspicion arose that six communities would be given permanent resident certificates. Although the Arunachal chief minister has said the “issue is closed” and ruled out granting the status, arson attacks are continuing in the state where the army is out.

A petition challenging the validity of Article 35-A is scheduled to come up in the Supreme Court soon.

Although the governor’s administration in Jammu and Kashmir has said only an elected government could take a position in the court, the Centre has so far not stated its stand unequivocally. Reports that the Centre was planning an ordinance and a decision to send 10,000 more central forces to Kashmir has put the state on edge.

On Monday, Omar Abdullah, the National Conference leader and a committed nationalist, told his party workers: “They have set Arunachal on fire today because they have tinkered with their permanent residence certificate, the one which we also have here.”

Omar said that if Article 35-A was tampered with, the situation would be uglier than that in Arunachal. “I am not issuing a threat. Media will run a hashtag today that Omar is threatening India but I am stating a reality. As a responsible citizen it is my duty to warn you,” Omar said.

Mehbooba Mufti, a former chief minister and another pro-India politician, went a step further, saying any tampering would render Kashmir’s instrument of accession null and void. “Those frothing at the mouth and calling for its removal should not blame Kashmiris for the developments that will follow such a hare-brained decision,” she tweeted.

The separatist Joint Resistance Leadership and Hizb operational chief Riyaz Naikoo have warned of an agitation. The Hizb chief said non-Kashmiris would be asked to leave if Article 35-A was tampered with.