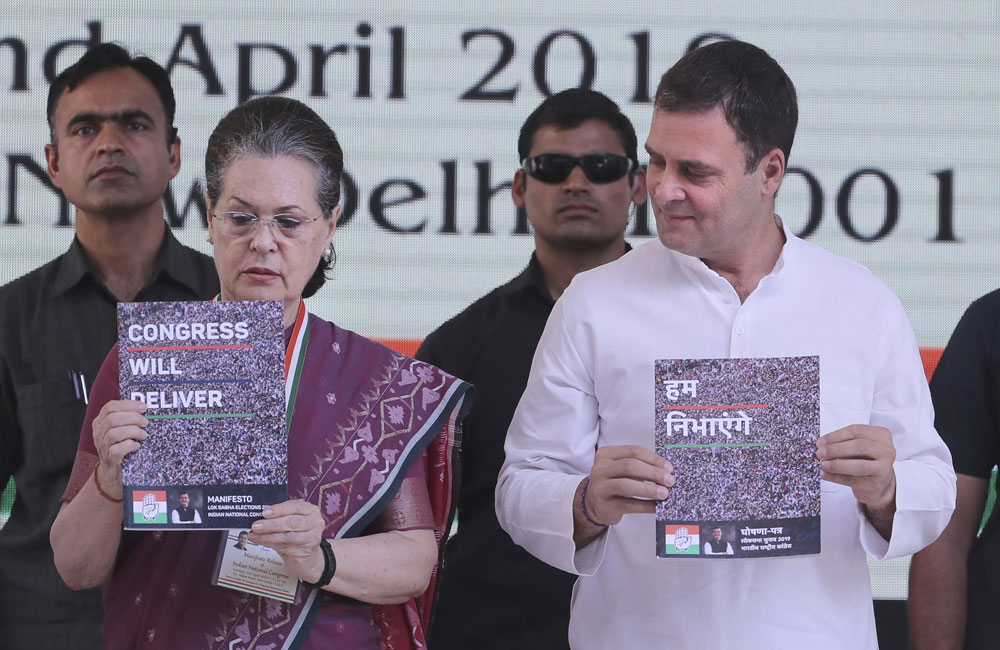 The embattled pro-India camp in the Valley breathed easy on Tuesday after the Congress acknowledged Kashmir’s unique history and promised to uphold its special status besides talks to find an “honourable solution” to problems that have come in the way of peace.

The party, in its manifesto for the April-May parliamentary elections, said nothing would be done to change the constitutional position on Jammu and Kashmir and promised to review the enforcement of the Armed Forces (Special Powers) Act in the state if voted back to power.

“(The) Congress has stood witness to the developments in Jammu and Kashmir since the instrument of accession was signed on 26 October, 1947,” the manifesto says.

“(The) Congress affirms that (the) whole of Jammu and Kashmir is part of India. We acknowledge the unique history of the state and the unique circumstances under which the state acceded to India that led to the inclusion of Article 370 in the Constitution of India.”

The manifesto pledged to hold dialogues to understand the aspirations of the three regions of the state — Kashmir, Jammu and Ladakh — “for an honourable solution to their issues” and reduce the footprint of security forces in the Valley by entrusting more responsibility to the state police.

“The Armed Forces (Special Powers) Act and the Disturbed Act in J&K will be reviewed. Suitable changes will be made in the text of the laws to balance the requirements of security and the protection of human rights,” the manifesto says.

Security forces enjoy near absolute immunity from criminal prosecution under the AFSPA.

The party also spoke about eschewing “muscular militarism” and “legalistic formulations” besides promising to look for “an innovative federal solution”.

Omar said it was better late than never, although he regretted that some Congress leaders had conspired against the partial withdrawal of the AFSPA when he was chief minister.

Then home minister P. Chidambaram had backed Omar’s call for withdrawing the act.

The former chief minister hit out at the BJP, which has fiercely opposed its withdrawal although the national party had in its agenda of alliance with the PDP for government formation in 2015 agreed to look into the demand for withdrawing the AFSPA.

“When the BJP talks about doing away with AFSPA (as it did in 2014) then it’s a sign of nationalism. When the Congress does it then it’s dangerous for the nation,” he tweeted.

Omar had on Monday triggered an angry reaction from Prime Minister Narendra Modi when he vowed to revive the posts of sadr-e-riyasat (president of the state) and prime minister for Jammu and Kashmir.

Omar was reacting to BJP president Amit Shah’s remarks on Sunday that by 2020, there would be no Article 35A, which gives permanent residents of Jammu and Kashmir exclusive rights to acquire immovable property in the state or secure government jobs or scholarships there.

Rival Mehbooba hailed the Kashmir component of the manifesto. “It was our agenda when we were in coalition with the BJP to revoke the AFSPA, to recall security forces from civilian areas, to have dialogue with representatives of separatists and Pakistan. I am happy the Congress has included it in their manifesto,” she said.

Omar hit back at Gautam Gambhir for the cricketer-turned-BJP politician’s remarks following his call to revive the posts of prime minister and president for Jammu and Kashmir.

“Omar Abdullah wants a separate PM for J&K and I want pigs to fly! More than a separate PM Omar Abdullah needs some sleep followed by a strong coffee! If he still doesn’t understand then a green Pakistani passport,” Gambhir tweeted on Tuesday.

The National Conference leader asked Gambhir to stick to cricket. “Gautam, I never played much cricket because I knew I wasn’t very good at it. You don’t know very much about J&K, it’s history or the role of @jknc_ in shaping that history yet you insist on displaying that ignorance for all to see. Stick to stuff you know about, tweet about the IPL,” he tweeted.