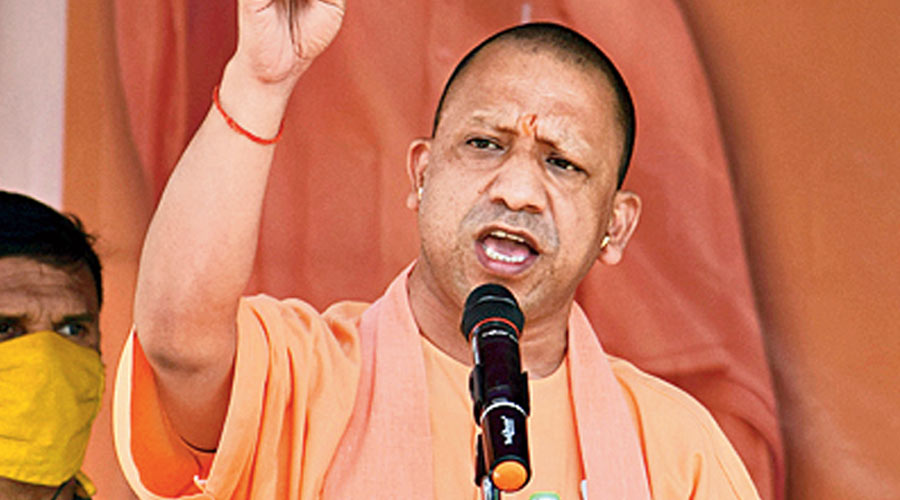 Uttar Pradesh Chief Minister Yogi Adityanath on Friday said India's history would not be complete without mentioning the sacrifice of the Sikh gurus as they transformed their 'bhakti' (devotion) into 'shakti' (power) to protect the nation.

He also hailed the Sikh gurus for their "unmatched" contribution in safeguarding the dignity and culture of the nation, the Uttar Pradesh government said in a statement issued here.

According to the statement, marking the 401st 'Prakashotsava' of Guru Tegh Bahadur at Raj Bhavan here, the chief minister, wearing a saffron turban, said, "The selfless service and devotion with which the Sikh gurus protected the country has always been an inspiration for all countrymen".

"The Sikh gurus' divine tradition never allowed the divisive foreign elements who came with intentions of crushing our dharma to succeed," the chief minister said.

Adityanath also expressed anger over the Sikh tradition not getting enough recognition, saying, "No country can develop without learning from its past. Even as we progress, we must keep our history intact. Sikh Gurus remind us of the glorious victory of India over tyranny."

Uttar Pradesh Governor Anandiben Patel, who was also present on the occasion, termed the Sikh tradition as the great culture of humanity.

"The Gurus enlightened us with all the qualities of humanity including faith in religion, values, compassion, selfless service, and also inspired others to protect the nation," she said.

Remembering the martyrdom of the four sons of Guru Gobind Singh Maharaj, Adityanath said that to celebrate their legacy and sacrifice, Prime Minister Narendra Modi had announced 'Veer Bal Diwas'.

"Who does not know that Aurangzeb wanted the Sahibzade of Guru Gobind Singhji to renounce their faith and abandon the teachings of the great Guru traditions by luring them, but they chose getting buried alive to protect the country," the chief minister said.

He also said the Sikh community is known for its dedication towards the nation in the entire world. "It is well known, who were the ones that drove the Kashmiri Hindus and Kashmiri Pandits from Kashmir. Guru Tegh Bahadurji Maharaj was the one who protected the Kashmiri Pandits in the country," Adityanath said.

The chief minister said celebrations were possible only because of a fear-free environment. Such events cannot be organised in Kabul, he pointed out.

Describing the organisation of 'Langar' in Gurdwaras as a wonderful tradition of humanity, Adityanath urged all the citizens to learn 'Gurmukhi' and embrace the rich Sikh tradition. The chief minister also launched the mobile application of 'Uttar Pradesh Punjabi Academy' on the occasion.