IMD issues alert for heavy downpour on Thursday as well 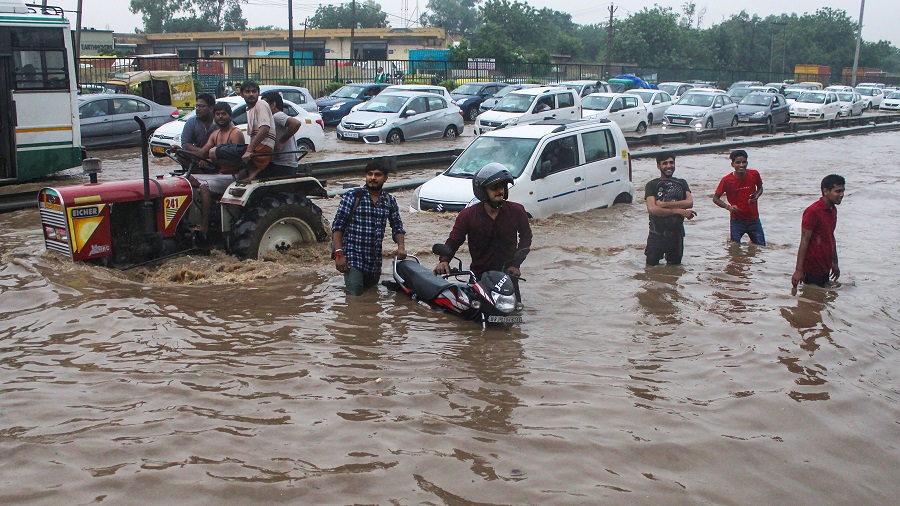 Many parts of the national capital and key road stretches remained flooded as rains continued to drench the city on Thursday, triggering traffic snarls during morning rush hours.

The India Meteorological Department (IMD) has warned of heavy rains in the city on Thursday as well.

The downpour may lead to "major traffic disruption" due to heavy water logging and there is an "increased chance" of road accidents, it warned.

The Safdarjung Observatory, which provides representative figures for the city, recorded 46 mm rainfall between 8:30 am on Wednesday and 8:30 am on Thursday.

Similar scenes played out on Wednesday, as incessant rains pummelled the national capital region, submerging roads, underpasses and parks in waist-deep water and bringing traffic on key stretches to a virtual halt.

The flooding was particularly severe in Gurugram, where roads turned into small rivers and parks resembled swimming pools.

Just a few hours of rains flooded swathes of Delhi, spelling trouble for commuters who remained stuck for hours on water-logged roads.

Pictures and videos of vehicles and people wading through waist-deep water were widely shared on social media.

The rains also crippled electricity supply in many areas.

Civic bodies reported incidents of uprooting of trees in a few areas due to the rains.

A boundary wall of a school in Saket collapsed, damaging several vehicles parked alongside it.

Earlier, we used to witness continuous light rains over two-three days. Nowadays, the same quantum of rainfall occurs in just 2-3 hours. These extreme events have been taking place across the tropical region since last 10 years," he said.

Experts said the flooding was a result of bad urban planning.

"Flooding in Indian cities is largely a product of bad urban planning. In Delhi, the Yamuna floodplains have been encroached upon obstructing the natural water flow. Other issues include deforestation, poor drainage system and lack of integrated urban planning," Anjal Prakash, research director, Indian School of Business, Hyderabad, said.

Kuldeep Srivastava,the head of regional forecasting center of the IMD, said the axis of monsoon will remain close to the national capital till Thursday. Therefore, more rains are likely.

The downpour also reduced the rain deficiency in the capital -- from 13 percent on Monday to 11 percent on Wednesday.

The Safdarjung Observatory has recorded 147.4 mm rainfall against the normal of 165.2 mm in August so far.

Overall, it has recorded 466 mm rainfall, six per cent more than the normal of 441.3 mm since June 1 when the monsoon season starts.

A vehicle buried under the debris after wall of a public school collapsed due to heavy rains, at Saket in New Delhi on Wednesday
PTI

An uprooted tree blocks a road near the Parliament Annexe, after heavy rains in New Delhi on Wednesday
PTI