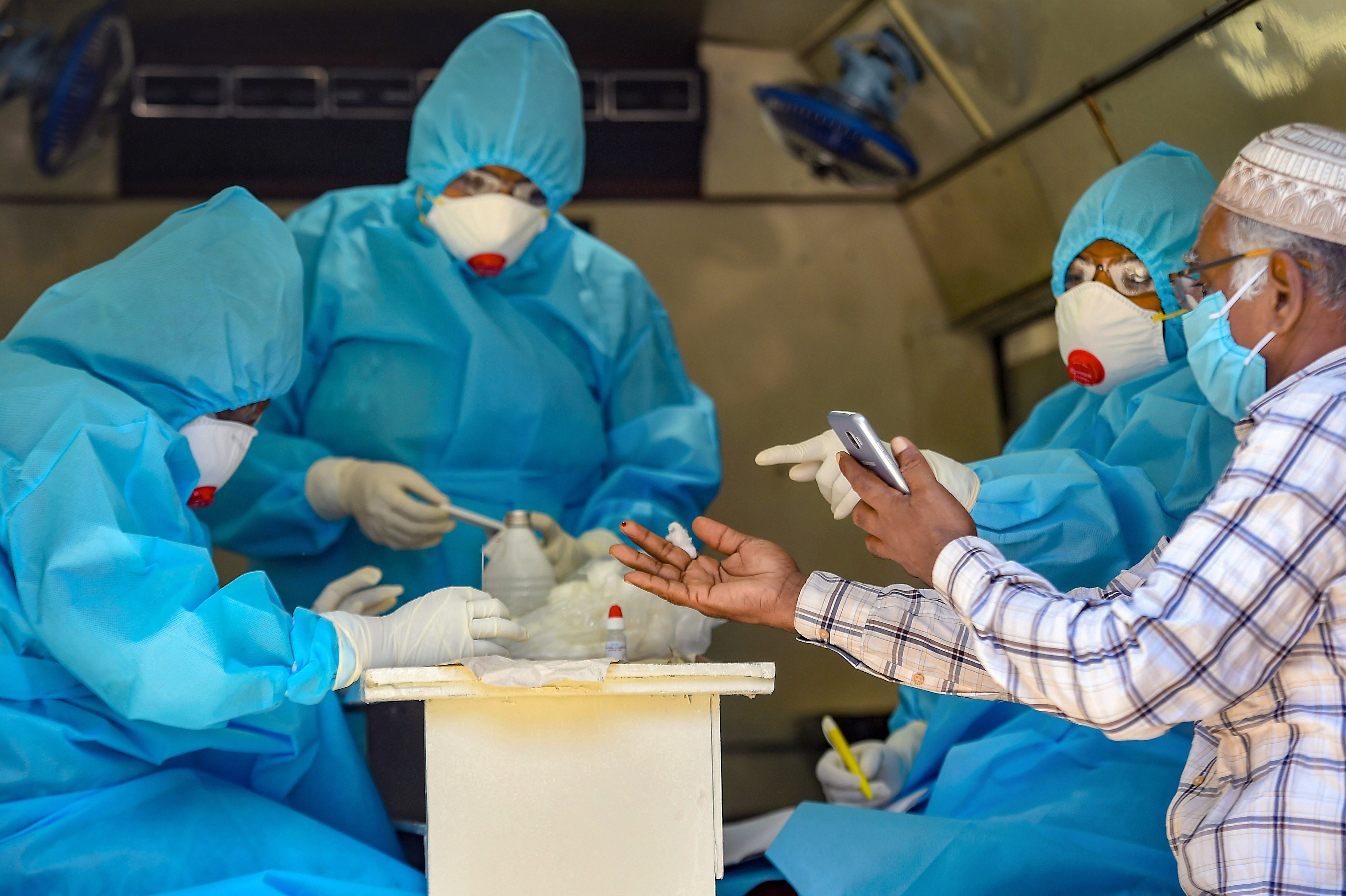 India's apex medical research body ICMR on Tuesday advised states to stop using the rapid antibody test kits for next two days till it examines their quality in the wake of complaints that they are not fully effective.

The Rajasthan government on Tuesday said that the kits were giving out inaccurate results.

At a press briefing, Head of Epidemiology and Communicable Diseases at Indian the ICMR, Dr Raman R Gangakhedkar, said the companies which supplied the kits will be asked to replace them if the kits are found to be faulty.

The Indian Council of Medical Research (ICMR) has been the nodal medical body in India's fight against the pandemic.

'We have received complaints from one state and so far discussed the issue with three states. High variations ranging from 6 to 71 per cent have been reported between the results of the rapid tests and-PCR tests. We will advise states not to use these testing kits for the next two days,' he said.

These kits will be tested and validated in the field by teams from our eight institutes after which we will issue a clear-cut advisory for the states. If there is some fault in the batch, we will ask the company to replace the kits,' Gangakhedkar said.

Officials clearly indicated that the kits over which questions have been raised are from China.

Rajasthan health minister Raghu Sharma on Tuesday said the kits gave only 5.4 per cent accurate results against the expectation of 90 per cent accuracy and therefore were of no benefit.

In the wake of adverse reports about the quality of Chinese medical equipment, spokesperson in the Chinese embassy Ji Rong last week said China attaches great importance to quality of medical products.

'We hope that foreign buyers can choose products certified by Chinese regulatory authorities and with production qualifications when importing relevant products,' Ji had said.

She said the Chinese authorities introduced stricter regulatory measures, requiring exporters to declare that their supplies have obtained the registration certificate for medical device from the State Food and Drug Administration and meet the quality standards of the importing country.

About questions over quality of the tests, Gangakhedkar said that these were first general tests and may show variations.

It has been just three-and-half months since the disease appeared and so any test will have to be refined further, he added.

At present, the government uses the polymerase chain reaction (PCR) tests to detect coronavirus from throat or nasal swab samples of people. These take around five to six hours to show the results.

In the rapid antibody tests, the blood samples of suspected patients are taken, and it normally takes around 15-30 minutes to give the result.

The government has recommended the use of rapid antibody tests in hotspot areas.

'It is to be used for surveillance and for epidemiological purposes in such areas. The-PCR test is the gold standard for frontline tests and antibody tests cannot replace this test. Utility of rapid antibody test is primarily for assessing prevalence of infection in a particular area,' officials earlier had said.

India has been facing severe shortage of testing kits amid rising cases of the coronavirus.

Asked if the number of cases would stabilise, Gangakhedkar said, 'The doubling time of cases is increasing, the current situation indicates that a significant increase in the number of coronavirus cases is unlikely.'

Joint Secretary in the ministry of Health Lav Agarwal said that along with Mahe (Puducherry), Kodagu (Karnataka) and Pauri Garhwal (Uttrakhand) , a new district Pratapgarh in Rajasthan has not reported any fresh cases during the last 28 days.

There are now 61 additional districts from 23 states and UTs that have not reported any fresh cases in the last 14 days. Four new districts which have been included in the list are Latur, Osmanabad, Hingoli and Washim from Maharashtra, according to the official.

Agarwal further said that the Union Health Minister has written to all state and UT health departments asking them to ensure adequate availability of blood in blood banks especially for people requiring regular blood transfusion on account of disorders such as Thalassemia, Sickle Cell Anemia and Hemophilia etc.

Agarwal said that detailed guidelines have been issued to states that they should focus on Covid-19 cases while, at the same time, non-COVID hospitals should provide regular services relating to maternal and child care, dialysis as well as treatment for cancer and HIV patients.

While providing all these services, required infection prevention control practices should be ensured in hospital set-ups to prevent spread of hospital related infections, he said.

Agarwal said that a total of 1,336 new cases have been reported in the last 24 hours since Sunday morning taking the total number of cases in the country to 18, 601.

Also 3,252 people have been cured so far with 705 people, the highest so far, having recovered on Monday. So overall 17.48 per cent people have recovered in the country so far, he stated.

Responding to a media query about 80 per cent of the Covid-19 patients being either asymptomatic and having mild symptoms and how the government is dealing with it, Gangakhedkar said that it is just one study according to which 80 out of 100 patients are asymptomatic.

'There are few reports of lab-confirmed Covid-19 cases which are truly asymptomatic. There has been no documented asymptomatic transmission. This does not exclude the possibility that it may occur,' Agarwal said referring to a WHO report.

'Using community surveillance and contact tracing, we are taking pre-emptive action to test asymptomatic persons with high risk contacts so that we are able to identify infected patients in early stage, treat them and reduce mortality,' he said.